New Mexico’s State Librarian, Susan Oberlander, provided one of the most descriptive presentations on the state’s digital literacy program.

As part of the training programs, the attendees participate in broadband usage surveys that track their interests and progress.

“Our preliminary findings are quite interesting,” said Oberlander. “We found that a large number of small businesses that come to our workshops already have broadband, but they want to expand their knowledge of computers.”

The surveys also found that cost of service and lack of a computer are the largest barriers to adoption.

“People already go to the library to use computers; it becomes a natural place for them to learn more,” Stiefyater said.

Stiefyater also talked about the benefits of training the small businesses: “Libraries face the same challenges of developing a web presence as small businesses do. The libraries have learned what works and are now able to train small businesses in the best practices.”

Congresswoman Doris Matsui (D-CA), who is co-chair of the Congressional High Tech Caucus, presented the first keynote address of the summit with the announcement that she will  reintroduce legislation to expand Lifeline and Link-Up to include broadband. The Lifeline and Link-Up programs currently provide subsidies to consumers to help pay for telephone service and connection costs.

“Community anchor institutions are critical to our communities,” Matsui said. “By keeping the internet free and open while improving digital literacy programs we can bridge the digital divide.”

She also stated that she supports the Federal Communication Commission’s plan to update  the Universal Service Fund (USF) to include broadband access.

“With the current budgetary realities it’s unlikely we will see another large round of funding, but the USF is a viable alternative,” said Matthew Hussey, Advisor to Sen. Olympia Snowe (R-ME), during a panel on the Congressional perspective.

“The grant programs are still new, but they are already producing results,” Strickling said. “During the last quarter they have already created one thousand new jobs, installed four thousand new computers and held over 150 thousand hours of training, and our middle mile projects are in talks with over 200 last mile providers to provide connections.”

Of the 233 BTOP projects, only two have been cancelled.

“We worked with these two award winners to try and salvage the projects but they declined our help so unfortunately the projects were canceled,” Strickling said. “Both projects were in the early stages and there was a minimal loss of federal funds.”

According to Strickling, the funds which are not used by the grantees will be given back to the Treasury department to help decrease the deficit.

Strickling then provided the audience with an overview of the National Broadband Map which the NTIA unveiled in February. He called the map a “first try” and promised that with each update the map’s accuracy will improve. With regard to the depth of the data, Strickling said that originally the NTIA wanted to collect address-level data, however, internet service providers told the agency that they did not keep data at that granular of a level. Instead, the NTIA settled on census-block level data, which is more precise than the zip-code level data the FCC collects.

“When we compiled the map we asked internet service providers for their advertised speeds,” Strickling said, “but with anchor institutions we were able to obtain actual speeds and many of them said they did not receive the speeds they wanted or needed. Our anchor institutions are being underserved.”

According to Strickling educational researchers have found that schools need 100 megabits per second (Mbps) for every 100 students, but most schools are not able to provide that level of speed.

When asked by the audience about how looming budget cuts will affect the NTIA’s oversight of the BTOP grantees, Strickling said that both of the continuing resolutions that Congress has passed have included funds for oversight and he does not suspect the funds to be cut in the final budget resolution.

The agency hopes its new speed test will inform an initiative for more accurate broadband maps. 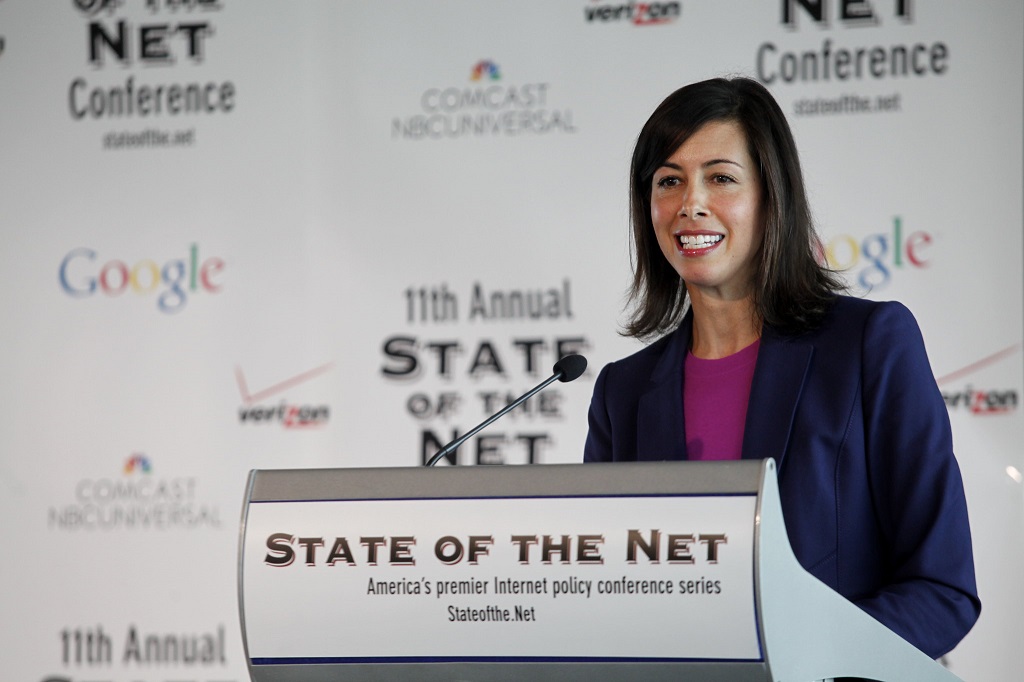 April 12, 2021 – As part of the Federal Communications Commission’s effort to collect comprehensive data on broadband availability across the United States, the agency is encouraging the public to download its Speed Test app, it announced Monday.

The FCC is using data collected from the app as part of the Measuring Broadband America program. The app provides a way for consumers to test the performance of their mobile and in-home broadband networks. In addition to showing network performance test results to the user, the app provides the test results to the FCC while protecting the privacy and confidentiality of program volunteers. It is available on the major app stores.

“To close the gap between digital haves and have nots, we are working to build a comprehensive, user-friendly dataset on broadband availability,” Acting FCC Chairwoman Jessica Rosenworcel said in a statement. “Expanding the base of consumers who use the FCC Speed Test app will enable us to provide improved coverage information to the public and add to the measurement tools we’re developing to show where broadband is truly available throughout the United States.”

The network coverage and performance information gathered from the Speed Test data will help to inform the commission’s efforts to collect more accurate and granular broadband deployment data. The app will also be used in the future for consumers to challenge provider-submitted maps when the Broadband Data Collection systems become available. 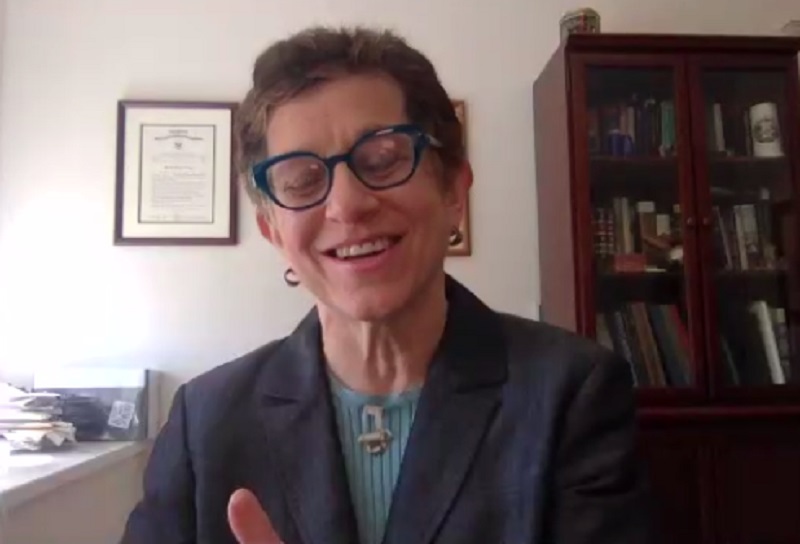 Screenshot of Gigi Sohn from the webinar

“Start at square one, and that is with good data and good maps,” said Sohn, who was speaking at a virtual LGBT Bar Association event on March 10. “Right now, the data the FCC is using to determine where there is broadband and where there is not is grossly inaccurate.”

Good policy cannot be done with bad maps, she said, but she added progress is being made with Congress’ passing of the Broadband DATA Act and the FCC receiving than $98 million to deploy mapping. However, she noted that the FCC is moving “a little slower than she would prefer” to build these maps.

In December, the FCC awarded $9.2 billion in funding from the first round of the Rural Digital Opportunity Fund. Sohn said, however, that the money was doled out with bad maps.

She said part of the problem is that different federal agencies are lacking coordination with maps, which creates duplicate decisions and more bureaucracy.

One solution lies in getting the state agencies involved. “The states cannot be left out of the calculation. There must need to be a blueprint to where the funding is going to go so there is no duplication and everybody can be served,” said Sohn.

“Unfortunately, because it is taking the FCC so long to build these maps, the states are doing by themselves,” she added.

Georgia and Maine, for example, are beginning to go it alone with their own broadband maps.

“I do believe the state maps are going to be more granular than what the federal government is going to come up with,” Sohn said.

Broadband service providers are not geocoding experts, said Lynn Follansbee of US Telecom, and they don’t know where all the people are.

The new fabric dataset is going to be very useful to get a granular look at what is and what is not served and to harmonize geocoding, she said.

AT&T’s Mary Henze agreed. “We’re a broadband provider, we’re not a GIS company,” she said. Unified geocode across the whole field will help a lot to find missing spots in our service area, she said.

The new Digital Opportunity Data Collection fabric is a major shift from the current Form 477 data that the FCC collects, which has been notoriously inaccurate for years. The effort to improve broadband mapping has been ongoing for years, and in 2019 US Telecom in partnership with CostQuest and other industry partners created the fabric pilot program.

That has been instrumental in lead to the new FCC system, panelists said. It is called a “fabric” dataset because it is made up of other datasets that interlace like fabric, Follansbee explained.

The fabric brings new challenges, especially for mobile providers, said Chris Wieczorek of T-Mobile. With a whole new set of reporting criteria to fill out the fabric, it will lead to confusion for consumers, and lots of work for the new task force, he said.

Henze said that without the fabric, closing the digital divide between those with broadband internet and those without has been impossible.

The new mapping can help in rural areas where the current geolocation for a resident may be a mailbox that is several hundred feet or farther away from the actual house that needs service, Follansbee said.

Rural areas aren’t the only places that will benefit, though. It can also help in dense urban areas where vertical location in a residential building is important to getting a good connection, said Wieczorek.

The fabric will also help from a financial perspective, because of the large amount of funding going around, said Charter Communications’ Christine Sanquist. The improved mapping can help identify where best to spend that funding for federal agencies, providers, and local governments, she said.

There is now more than $10 billion in new federal funding for broadband-related projects, with the recent $3.2 billion Emergency Broadband Benefit program as part of the Consolidated Appropriations Act in December 2020 and the new $7.6 Emergency Connectivity Fund part of the American Rescue Plan that President Joe Biden signed into law Thursday.

The new FCC task force for implementing the new mapping system was created in February 2021, and is being led by , led by Jean Kiddoo at the FCC. No specific dates have been set yet for getting the system operational.