“Most of my career, computing has been something that you hold in your hand, in your pocket, or that sits on a desk,” said CEO Brian Krzanich. “That idea is about to be transformed.”

Krzanich, an engineer with 32 years of experience at Intel, spoke about a range of technologies and products to be launched by the company in 2014. Most of them rely on this extremely small microprocessor, and include:

When the baby’s temperature rises or when he or she awakes, Edison communicate with radio-transmitters in the parents’ coffee mug, and also automatically turn on a hot bottle warmer so that it will be ready when the baby awakes.

This “Nursury 2.0” is just one example of “a network of devices, all smart, all working together, all coming to market in 2014,” said Krzanich.

To facilitate an ecosystem of innovation around Edison, Krzanich announced $1.3 billion in prices to design the next big wearable technology. He also said that the company would make its McAfee anti-virus software available for free on all consumer mobile devices.

Krzanich made his “tiny is big” address on Monday night here, the power position at #CES2014 historically dominated — in the era when the personal computer was big — by former Microsoft CEO Bill Gates.

Microsoft famously didn’t have a booth at last year’s CES. Although the software company has “returned” to the show this year, Microsoft no longer has the power position in the marketplace because the company has struggle to make the transition from the desktop world to the m

Neither is Intel , which makes the computing “brains” that live in a range of computers, tablets, phones, and now smaller devices, assured continued success as digital technology makes the next stage of its evolution.obile device world.

But Krzanich argued that innovation is moving away from the keyboard interface, and into a much smaller place. This is the environment in which countless digital devices will be integrated and should work together to positively impact humans’ lives.

In other aspects of his remarks, Krzanich discussed how tablet computers are being more effectively used by businesses, in addition to consumer use. For example, the food chain Applebee’s has met with success by putting Intel-based tablets table-side.

That’s enabled quicker table turnover for the restaurant company. Waiters and waitresses are benefitting too, with 15 percent higher tips, he said.

In another move designed to appeal to the corporate world, Krzanich announced that Intel-based tablets will allow use of both the Android operating system and the Windows 8 operating system for both tablets and computers.

Intel’s Krzanich also highlighted immersive reality, where computing power in creating new games that combine both a physical sandbox and a virtual character who “plays” in the space. He used a similar technology to showcase a giant virtual whale “swimming” around the ballroom where he gave the keynote.

And he concluded by re-emphasized the company’s legacy commitment to encouraging scientific education and innovation, showcasing a range of winners of the Intel International Science and Engineering Fair and competition.

The Internet of Everything, 3D Printing, 4K Video, and Robotic Drones: Among Broadband Breakfast’s Top 5 Trends From CES 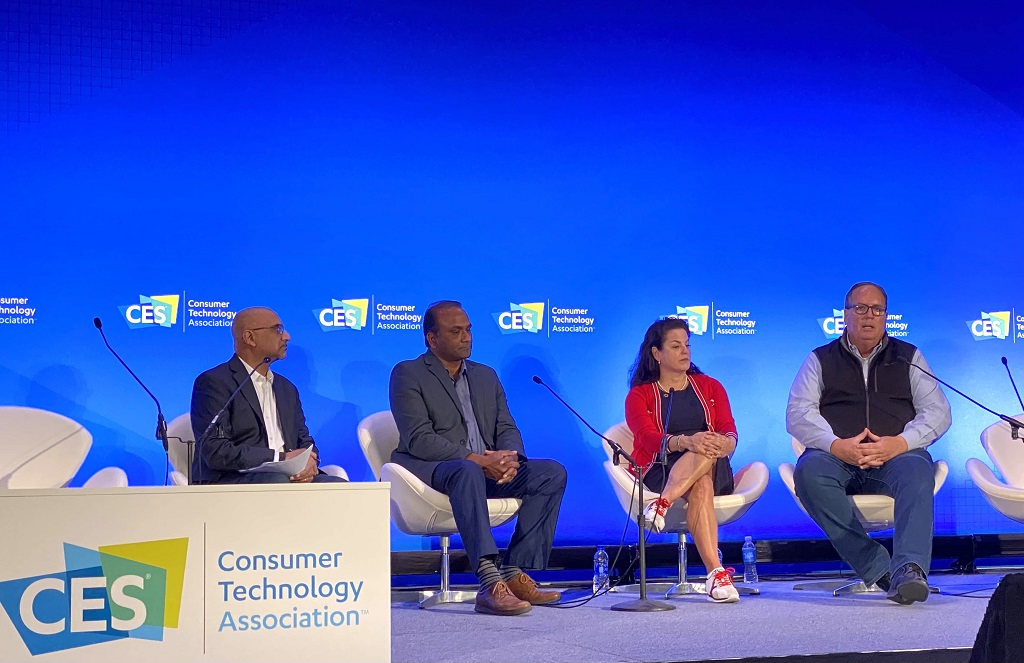