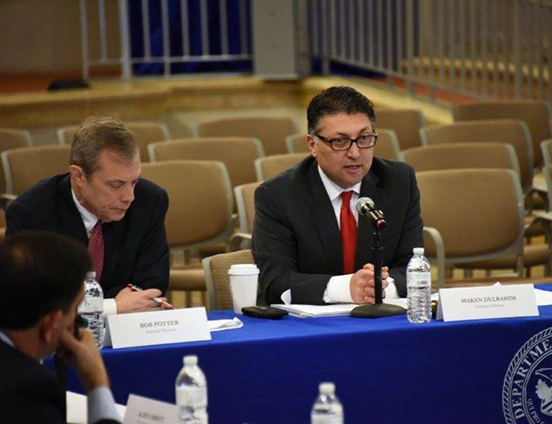 WASHINGTON, June 13, 2018 – Was a federal district court judge’s decision to permit AT&T’s merger with Time Warner a victory for the rule or law over politics – or was it instead another defeat for the consumer at the hand of ever-consolidating mega-entities?

That question permeated Tuesday’s conference on “Free Speech and Democracy in the Age of Platform Monopoly” hosted by the Open Markets Institute think tank – even before Judge Richard Leon ruled late in the date that AT&T may consummate its merger over the objection of the Justice Department.

Delrahim called the merger an “anti-competitive acquisition,” accused AT&T of using it as a way to monopolize the pay TV business.

Rule of Law, or political meddling in antitrust enforcement?

The Trump administration position was supported by many left-leaning consumer groups, even as they warily considered the role that President Trump’s well-known aversion to CNN – which is owned by Time Warner – might have played in the decision to sue AT&T.

On the other hand, free market groups such as TechFreedom celebrated Judge Leon’s decision. President Berin Szoka released a statement celebrating the outcome of the merger case, and accusing the Trump administration of meddling in the law.

“Today’s decision is a victory for the rule of law,” said Szóka. “This lawsuit was never intended to do what antitrust is supposed to do: protect consumers from the abuse of market power…The Trump [Department of Justice’s] legal and economic theories were so baseless that the court went out of its way to urge the DOJ not to appeal or even to seek a stay upon appeal. This wasn’t a remotely political decision: it was simply an application of well-established antitrust principles to the facts of this case.”

“At least in antitrust law, the courts, not Trump officials, will have the final say on what the law really is,” said Szóka.

Dancing around the elephant in the room: Donald Trump’s personal vendettas

Delrahim denied any political involvement in Justice Department’s decision to bring the AT&T merger to court – and even expressed the importance of not allowing political viewpoints to interfere in antitrust enforcement.

Beyond his argument that this particular merger might squeeze out competition, Delrahim expressed concerns over the political landscape negatively influencing decisions in antitrust cases.

“When we were preparing our complaint in the AT&T Time Warner case, we received a curious request from an unnamed state antitrust enforcer,” Delrahim said.

“They told us that they would join our case if we provided written assurances that no divestiture of that transaction would go to Fox, or to Rupert Murdoch. They actually wanted to direct a divestiture based on the viewpoint of the buyer, not on what benefits competition or consumers, as defined by the consumer welfare standard.”

”We of course rejected that request because it would have been unconstitutional,” Delrahim said.