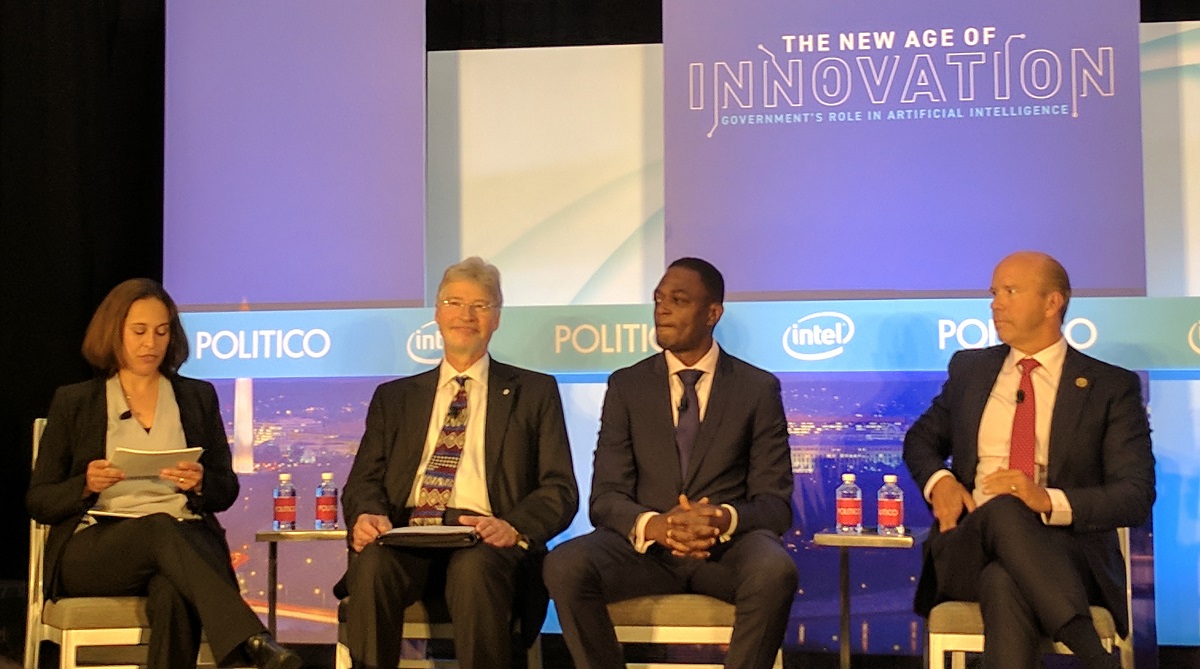 WASHINGTON, July 12, 2018 – A Republican congressman on Wednesday criticized the U.S. government’s treatment of the ZTE ban as a waste of an opportunity that could have given the U.S. a leg up in the race for new technology.

Earlier, the Commerce Department announced that the U.S. has signed an agreement to lift the ban on Chinese phone-manufacturer ZTE once ZTE deposits $400 million into a U.S. bank  escrow account.

In the morning, politicians and experts gathered at a Politico event about artificial intelligence, which quickly became a criticism of China-U.S. relations in the tech industry.

“I think we missed an opportunity with ZTE,” Congressman Will Hurd, R-Texas, said, referring to the government’s response to the ZTE situation.

ZTE in the cross-hairs of executive and legislative branches

Earlier in the year, ZTE came under fire for violating U.S trade sanctions by illegally shipping parts to Iran and North Korea. Due to the violations, the U.S. Department of Commerce issued a ban on ZTE in April, preventing U.S. companies from exporting parts to ZTE.

In June, Commerce Secretary Wilbur Ross officially declared that the government had reached a deal to lift the ban on ZTE. This announcement was met with large amounts of criticism from Democrats such as Sen. Bill Nelson, of Florida, who said at a hearing of the Commerce Department’s National Telecommunications and Infrastructure Agency that “the administration simply needs to revert back to a ban on ZTE.”

This criticism has crossed party lines as Hurd, a Republican, expressed similar disappointment in the administration’s decisions to lift the ban on ZTE.

“[ZTE] is an extension of the Chinese government. They were on their knees because they violated a number of international rules,” Hurd said.

According to Hurd, the ZTE incident represents the U.S. losing an opportunity to bargain with China. The incident with ZTE should have been used to force China to treat American companies in China the same as China treats companies from its own nation, Hurd said.

The July 11 agreement, signed amid Trump’s escalating trade war with China, will allow ZTE to begin trading again with U.S. companies after a three-month ban, once ZTE deposits the $400 million into an escrow account.

The ban had begun to cripple ZTE before Trump announced over tweet that he would work with the Chinese government to find a solution, citing massive job loss as a reason for his cooperation.

“We had a leverage point – I think we lost it,” Hurd said. “Trade wars with our allies are bad, but we should be using every tool in our tool kit against China.”

Is America at a disadvantage in playing by the rules?

Rep. John Delaney, D-Maryland, voiced concerns that the U.S. could lose in trade battles with China due to differences between the two countries’ governance styles.

“Our private sector is unrivaled,” Delaney said. “What [Hurd] highlighted is that China’s ascent to our rival economically is based on two things. One, they’ve worked harder and they’re making smarter investments, but the second thing they’ve done is not play by the rules.”

“We can’t let them do the second part,” Delaney said. “We have to put them in a position where they play by the rules.” China does well, he said because  “they are willing to sacrifice their citizens for the good of the advancement of the country.”

Hurd echoed those fears that the U.S. may be at risk of falling behind in a global trade race.

“How are we doing? I would say best case scenario, we’re tied with China,” Hurd said.

Falling behind China in other areas of technology

The idea that the U.S. is falling behind in the global race is not isolated to artificial intelligence.

Recently, the 5G debate and antitrust policy debates have been linked to Chinese competition. In a hearing on the proposed merger of Sprint and T-Mobile, company officials argued that the merger is necessary now – in the age of the Chinese threat –in order to accelerate U.S. 5G development.

“We’re still the benchmark, because the greatest innovators, the smartest people – all that is here in the United States of America. But China – their investment in AI research, their ability to force their private sector and their government to work together, is unparalleled,” said Hurd. “They don’t care about privacy.”

Hurd warned that due to China’s “authoritarian government”, China can “force action” in their industry and potentially bypass the U.S. in the tech industry.

In the past, China has been accused of stealing intellectual property of American companies to further its own inventions and market.  However, Hurd suggested that though that has been the case of the past, in the present, China is quickly sowing the seeds for growing their own technology and innovation sector.