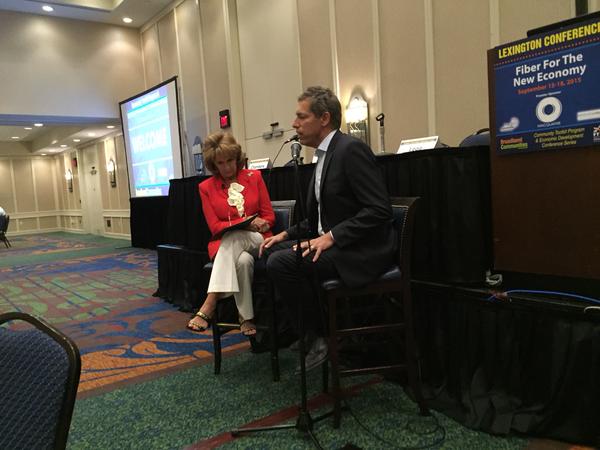 PITTSBURGH, July 31, 2018 – Rural electric cooperatives and not “small cell” deployment powered by 5G networks, may be the solution to closing the digital divide, according to Jonathan Chambers, former chief of the Federal Communications Commission’s Office of Strategic Planning.

“The nation was able to build electricity to every home in rural America. That was the objective starting in the 1930s, and the country was able to do so,” Chambers said. “It’s less expensive to build a fiber network than an electric network.”

A rural electric cooperative is a not-for-profit organization owned by the community that it serves. Many of these organizations started more than 80 years ago with a goal of building electric services to those rural communities that utility companies refused to serve.

Just as with broadband today, rural communities in America struggled to gain access to electricity because the low-density areas proved to be uneconomical for businesses..

“We can afford it as a nation to build fiber everywhere. We can afford it if we set the objective,” Chambers said, projecting confidence in the nation’s ability to get connected.

Chambers emphasized the importance of local and community action to solve the divide, just as it solved the electric divide with community-owned rural electric cooperatives.

“I don’t wait around for Congress, or the FCC, or the USDA either — this has to come from the community,” Chambers said.

Getting new networks in for coal country, Kentucky

Harry Collins, a teacher from Letcher County, Kentucky – a town devastated by the collapse of the coal industry – said that there is no broadband at all in the lower part of Letcher County, an area with 30 percent of the county’s population.

“It’s basically a wasteland– there is no connectivity,” Collins said. “We have people paying $85.95 for 1 Mbps (Megabit per second). That is capped in that area.” In other areas, he said, there are people paying nearly $190 for a 10 Mbps connection.

“We need to give them some sort of format to connect with the outside world,” Collins said.

Collins described harassment he experienced when trying to pilot a program to set up broadband for the lower portion of his country. According to Collins, a representative from a small cable company paid the city a visit to criticize them.

“He called us all liars, and then he called us politicians,” Collins said. He said, however, that the community backed Collins’ efforts and  “shooed ‘em out the door.”

Collins plans to move forward with his plan to build a local wireless network for the community without expecting or relying on assistance from the private sector.

“We’re not making a build-and-they-will-come project,” Collins said. “We’re building a project that’s a tool for our community.”

Criticism and praise of a wireless network in Kentucky

However, Collins’ efforts to build a wireless network in the community was met with criticism from other members of the panel, such as Fletcher Kittredge, CEO of telecommunications company GWI. Kittredge said Collins should instead be deploying fiber to prepare for the future, rather than setting up a network that would become obsolete in the next five years.

“All models now are wireless and fiber,” Kittredge said. “If you’re building a wireless network and someone tells you [that] you should not do it with fiber backhaul to the antennas, they’re probably misleading you.”

Kittredge instead advocated for laying down fiber, which he says could later be used for developing a better fiber network.  “The trick is fiber down some roads, and most roads, and then the antennas are going to be somewhere. It is incredibly painful to throw away fiber gear,” Kittredge said, emphasizing the importance of fiber networks despite the high cost of deployment.

However, Chambers and Policy Director of Next Century Cities, Christopher Mitchell, expressed support for Collins’ local effort to give access to members in his county.

“Build what you need,” Chambers said, despite advocating for repurposing prior infrastructure for fiber networks over building a wireless network. “That’s different – that I do agree with.”

Rural Utilities Service continues to have programs for building broadband

While Collins explained that he opted out of a fiber network because it would be too expensive, Richard Jenkins from the Rural Utilities Service of the Agriculture Department described federal programs for financing broadband deployment.

“We also strive to provide with our financing something where there’s nothing,” Jenkins said. According to Jenkins, for the USDA’s programs, “10/3 is the base,” referring to 10 Mbps downstream and 3 Mbps upstream. “Anything below 10/3 is considered unserved as far as we’re concerned with our programs,” he said.

Chambers praised the USDA’s approach to building out infrastructure. “The USDA has invested the public’s money in the nation’s infrastructure in the past 80 years with a long-term approach,” Chambers said.

“The USDA knows that if you are going to invest the public’s money, you ought to do so in long term infrastructure, not something that’s going to move from 3G to 4G to 5G to 6G.”

However, the cost of building out to unserved and underserved areas remains a burdensome issue.

According to research by broadband data analyst James Stegeman, from CostQuest, the cost of deploying a fiber-to-the-premises network for underserved and unserved portions of the country is over 95 billion.

Deploying a fiber-to-the-premises network to the unserved alone would cost an estimated 60 billion dollars.

Even that cost estimate may be an understatement, according to Chambers. He criticized the research for relying on the FCC’s Form 477 data. According to Chambers, the FCC data underestimates the number of underserved and unserved homes in the country. If the actual number of underserved and unserved homes were to be used in the formula, the cost could grow much higher.

“I believe it is economically feasible and economically necessary…to build fiber network to every home in this country,” Chambers said.

(Photograph of Jonathan Chambers in September 2015 by Drew Clark.)

For Robust Broadband in the 5G Era, More Local Control May Be Required