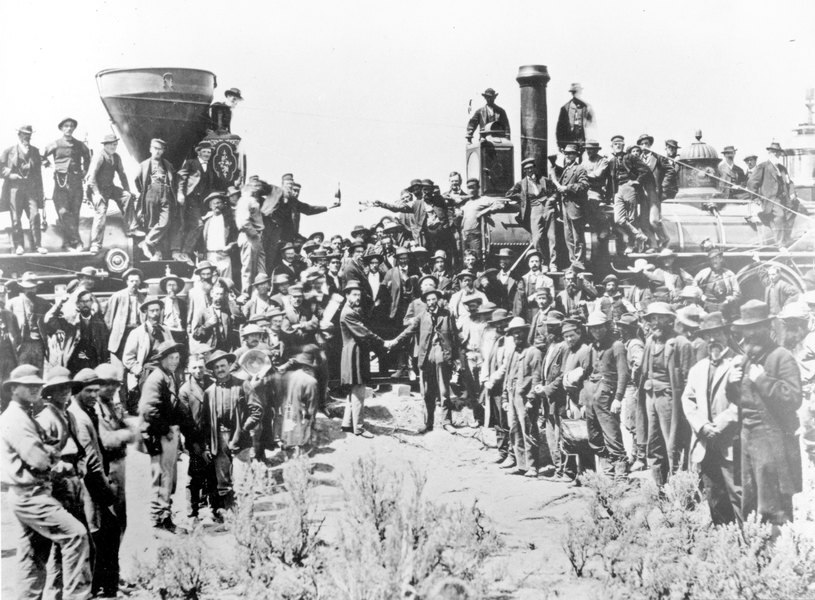 PROMONTORY POINT, Utah, May 10, 2019 – Think of the transcontinental railroad as the original public-private partnership.

The linkage of the Union Pacific Railroad and the Central Pacific Railroad 150 years ago today – at this desolate spot here in northern Utah – marked a confluence of engineering might, labor force logistics, private capital and federal grants of rights-of-way.

The drive to link the American continent via rail officially took root on July 1, 1862, with the enactment of the Pacific Railroad Act. It was signed by President Abraham Lincoln, who favored infrastructure improvements such as railroads and telegraphs. Lincoln also signed the Land Grant Act in that same year.

In addition “to aid in the construction of a railroad and telegraph line … to the Pacific Ocean,” the act secured these infrastructure improvements to the military. Passed at the height of the Civil War, the law also symbolically sought to unite the nation and continent together.

Of the two railroads that joined at this point on May 10, 1869, the California-based Central Pacific has already been chartered in California in 1861. The 1862 Railroad Act officially chartered the other railroad, Union Pacific, which started construction in December 1863 in Council Bluffs, Iowa.

Here’s the public-private part: The transcontinental railroad was financed by land grants of 10 square miles (and later 20 square miles) for every mile of track laid, back n an alternating pattern, and also by government railroad bond and private investment.

Although the ceremonial “golden spike” was hammered in just shy of 1 p.m. MT on May 10, each of the two railroads had to straighten, correct and otherwise “clean up” their work to quality for land grants and bond payments.

All told, 1,776 mikes of track were laid from Council Bluffs to Sacramento, California. The record of 10 miles of track laid in one day was recorded on April 28, 1869, only 14 miles from here.

The celebration set to occur here later today is also apparently the first Golden Spike re-enactment to include significant acknowledgement of the Chinese railroad workers.

WASHINGTON, September 14, 2021— Former deputy chief of the Federal Communications Commission Carol Mattey released a study on Tuesday recommending the agency reform the Universal Service Fund to incorporate a broad range of revenue sources, including from broadband.

According to the report by Mattey’s consulting firm Mattey Consulting LLC, revenues from “broadband internet access services that are increasingly used by Americans today should contribute to the USF programs that support the expansion of such services to all,” it said. “This will better reflect the value of broadband internet access service in today’s marketplace for both consumers and businesses.”

Mattey notes that sources of funding for the USF, which are primarily from voice revenues and supports expanding broadband to low-income Americans and remote regions, has been shrinking, thus putting the fund in jeopardy. The contribution percent reached a historic high at 33.4 percent in the second quarter this year, and decreased slightly after that, though Mattey suggested it could soar as high as 40 percent in the coming years.

“This situation is unsustainable and jeopardizes the universal broadband connectivity mission for our nation without immediate FCC reform,” Mattey states in her report, “To ensure the enduring value of the USF program and America’s connectivity goals, we must have a smart and substantive conversation about the program’s future.”

According to Mattey’s data, the assessed sources (primarily voice) of income will only continue to shrink over the coming years, while unassessed sources will continue to grow. Mattey’s report was conducted in conjunction with INCOMPAS, NTCA: The Rural Broadband Association, and the Schools, Health and Libraries Broadband Coalition.

“It is time for the FCC to take action, and to move away from the worst option of all – the status quo – that is jeopardizing the USF which is critical to connecting our nation,” the report said.

John Windhausen, executive director of SHLB, echoed the sentiments expressed by Mattey in her report, “We simply must put the USF funding mechanism on a more stable and sustainable path,” he said, “[in order to] strengthen our national commitment to broadband equity for all.”

Mattey’s research is generally in line with proponents of change to the USF. Some have recommended that the fund draw from general broadband revenues, while others have said general taxation would provide a longer lasting solution. Even FCC Commissioner Brendan Carr suggested that Big Tech be forced to contribute to the system it benefits from, which the acting chairwoman Jessica Rosenworcel said is an “intriguing” idea.

The FCC instituted the USF in 1997 as a part of the Telecommunications Act of 1996. The fund was designed to encourage the development of telecom infrastructure across the U.S.—dispensing billions of dollars every year to advance the goal of universal connectivity. It does so through four programs: the Connect America Fund, Lifeline, the rural health care program, and E-Rate.

These constituent programs address specific areas related for broadband. For example, the E-Rate program is primarily concerned with ensuring that schools and libraries are sufficiently equipped with internet and technology assistance to serve their students and communities. All of these programs derive their funding from the USF.