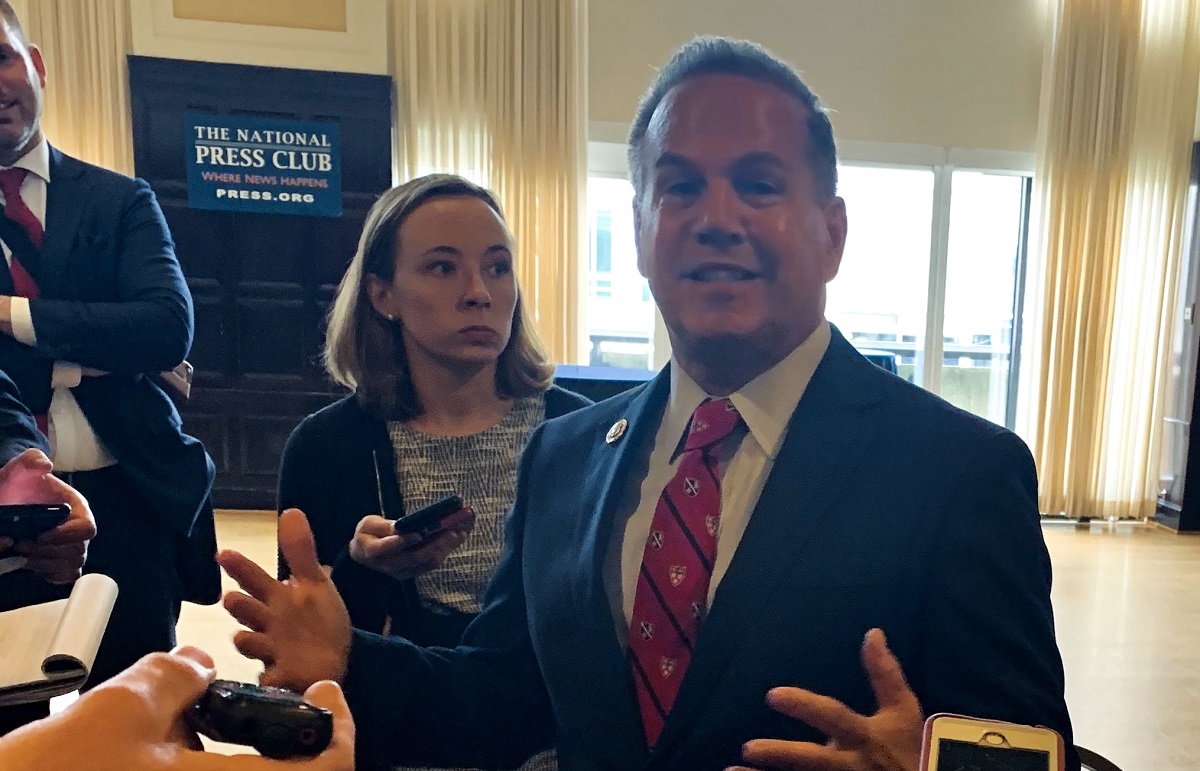 WASHINGTON, June 20, 2019 — Talking tough against Silicon Valley may be popular. But breaking up big tech will be hard to do.

That, at least, was one of the key messages coming from the American Antitrust Institute’s annual conference here on Thursday.

While progressives and populists are resurgent in the public eye, it isn’t going to be easy to take apart the tech giants, said Andrew Gavil, a noted antitrust law professor at Howard University.

The widespread calls for breakup ignore huge legal hurdles and dramatic societal implications from such a move.

Gavil expressed skepticism about the legal practicalities of plans to break up tech companies with antitrust laws, comparing such a move to the lawsuit brought against Microsoft in 1998.

The case against Microsoft wasn’t particularly driven by popular sentiment, although that might be a difference in any new cases against the tech giants two decades later.

Keynoting the event was House Judiciary Antitrust Subcommittee Chairman David Cicilline, D-R.I. Although Cicilline said he didn’t know what a recently announced bipartisan investigation into the tech sector would find, he did emphasize the urgency in confronting big tech.

Recalling the widespread anger and hostility to John D. Rockefeller’s Standard Oil and other so-called “trusts” in the early 1900s, Cicilline said, “Today, we are in a similar moment.”

But that popular anger against big tech – if it even exists – might not be enough to break any of them up.

Gavil particularly emphasized how difficult it was to take down a giant and bully like Microsoft – even after a multi-year investigation and a months-long trial.

The late District Court Judge Thomas Penfield Jackson ruled in June 2000 that Microsoft should be broken into two separate companies, one producing the Windows operating system and one producing other software and web properties.

However, following the appeal, the D.C. Circuit Court of Appeals overturned divestiture in June 2001. They still held Microsoft liable for antitrust violations and subjected it to several behavior remedies. But Microsoft was ultimately allowed to stay together.

The fact that big tech companies have grown to their current success primarily because of consumer satisfaction and value makes it unlikely that a judge would rule in favor of such a sweeping antitrust action, Gavil said.

Antitrust cases might be more successful in some cases than others. New York University Law Professor Scott Hemphill emphasized the importance of proposing a remedy to match the harm, suggesting that in Microsoft’s case, a breakup did not make sense.

Out of all the big tech companies currently under scrutiny, lawmakers might have the most success in breaking up Facebook. According to Hemphill, unwinding the acquisition of Instagram and WhatsApp would be straightforward and standard, especially relative to what is being proposed for the other companies.

In such a case against Facebook, the remedy of a breakup would match the harm of a lack of competition, he said.

By contrast, tackling Google would be much more complex.

Why? He said that the cure could be much worse than the ill. Any divestiture—even one that seems like a natural undoing—could easily become complicated because the technology has evolved so rapidly.

Moreover, judging by the terms of traditional antitrust enforcement over the past 35 years, it’s hard to immediately see a detriment to consumers from these acquisitions.

Although Facebook has come in for considerable fire over the issues of privacy, the tech giant also helped to elevate the stature of these platforms, said panelists. That has resulted in significant consumer satisfaction. Indeed, 72 percent of Americans actively use social media, the majority of them on a daily basis.

There is simply no way of knowing how the market will respond to undoing the acquisition and all the side effects that such an action may have, said Shelanski.

Politicians go after Silicon Valley as paradigms begin to shift

That hasn’t stopped politicians and presidential candidates – on the left and the right – from gunning for the biggest Silicon Valley giants.

Sen. Elizabeth Warren, D-Mass., has been especially vocal about her plan to break up big tech, which includes undoing previous mergers such as Google and YouTube, Facebook and Instagram, and Amazon and Whole Foods.

But finding a solution to the potential harms of detriments of information technology players will require some paradigm shifting. Indeed, the country would need to completely redefine the way it thinks about monopolies, said Shelanski.

He referred to an informal threshold of seeing 65 to 70 percent of market share as being necessary to have exercise a presumption of monopoly power.

That, he said, is a “bizarre threshold to overcome,” Particularly where in certain markets, just 30 percent of market shares could act as a monopoly.

In  1961, the United States sued Brown Shoe Company for antitrust violations after the company purchased its competitor Kinney, ultimately ordering Brown to completely divest all new assets within 90 days based on the Clayton Act’s prohibition of any acquisition where the effect “may be substantially to lessen competition, or to tend to create a monopoly.”

In a unanimous decision, the Supreme Court emphasized the word “may,” pointing out that the concern was “with probabilities, not certainties” and therefore mergers with even just a “probable anticompetitive effect” could be prosecuted under the Act.

This decision is especially surprising today when considered in light of the fact that Brown Shoe and Kinney only owned about 7 percent of U.S. retail shoe stores, combined.

By contrast, said Cicilline, Google controls more than 90 percent of search engines and Facebook accounts for over 70 percent of social networking sites.

Cicilline, whose official title is chairman of the House Judiciary Committee’s Subcommittee on Antitrust, Commercial and Administrative Law, earlier this month announced that his subcommittee would conduct a bipartisan investigation “to document whether dominant market participants are exercising their market power in anticompetitive ways and to assess whether our existing laws and current enforcement levels are adequate to address these problems.”

Over the next several months, he said, the investigation will complete a thorough review of online markets through a hearings, information requests, and discussions with key stakeholders and policy experts.

Cicilline said that he didn’t have preconceived ideas about what the investigation could find or what the ultimate answer to big tech should be.