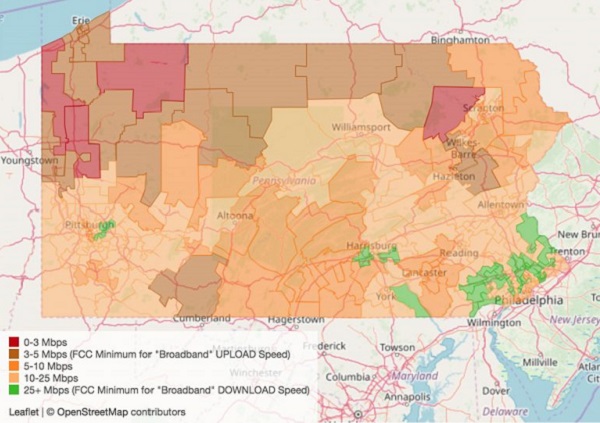 There is not a single county in Pennsylvania where more than half of the households meet federal standards for broadband, according to a report (PDF) released Monday by the Center for Rural Pennsylvania, a legislative agency of the state’s general assembly.

Researchers from Pennsylvania State University collected more than 11 million broadband speed tests to reach their conclusions, making use of the non-profit Measurement Lab platform for speed tests. By contrast, the Federal Communications Commission relied on self-reported data from internet service providers in its controversial annual broadband deployment report on May 29.

The Penn State report indicated that in rural areas, the discrepancy between what internet service providers report and actual connection speed has significantly increased since 2014.

The report said that the “take-home message from these analyses is this: It appears that official broadband maps are becoming less accurate over time—particularly those for rural areas—and the methodology used by the FCC not only overstates broadband speeds and availability but also shows results that are less and less accurate year after year.”

Pennsylvania Governor Tom Wolf acknowledged the issues identified in the report but pointed out that it did not offer any solutions to the problem. Wolf has proposed funding rural broadband with a severance tax on natural gas drilling as a part of his Restore Pennsylvania initiative.

“Restore Pennsylvania will bridge the digital divide in every community across the commonwealth, ensuring that every Pennsylvanian has access to high speed, reliable, and affordable internet service,” Wolf said in a statement on Monday. “The people of Pennsylvania deserve access to modern utilities including broadband internet, and we have the ability to bring it to everyone through Restore Pennsylvania.”

Wolf’s initiative has met with significant opposition from a variety of individuals and groups, including the president of the Chamber of Business and Industry President Gene Barr.

“While the PA Chamber agrees infrastructure development should be a priority, punitive energy taxes are not the best means to achieve this goal,” Barr said in a statement in May. “We are at risk of losing this competitive edge if state elected officials continue to call for higher energy taxes as a way to spend more government money.”