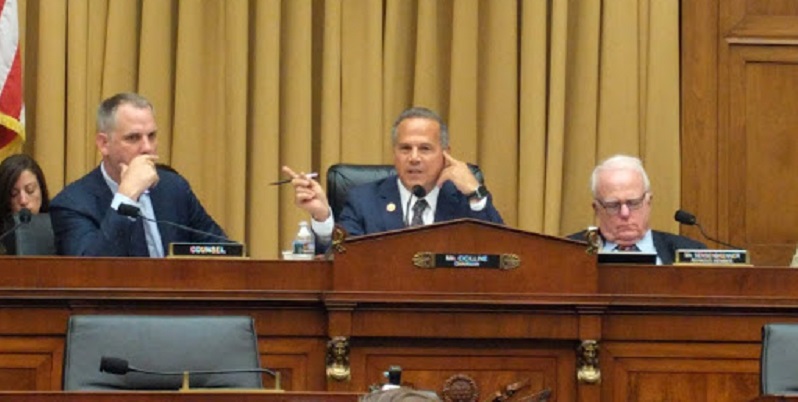 WASHINGTON, July 16, 2019 – In the House Judiciary Committee’s second hearing putting tech giants under the microscope, both the Democratic majority and some members of the Republican minority attempted to squeeze the companies into greater political compliance.

The internet has become more hostile and less open to entrepreneurs trying to enter the online market, he said, because these major firms are shielded from competition and smaller businesses face rising entry barriers.

Moreover, the prominence of big tech is not the inevitable result of innovation, but the result of choices made by policymakers, he said.

And while subcommittee Ranking Member James Sensenbrenner, R-Wis., doubted Democratic calls to break up big tech companies, a statement by the ranking member of the full committee, Doug Collins, R-Ga., put a bipartisan sheen on the tech-bashing.

“Almost all online engagement by individuals and businesses today runs through a few large platforms. When it comes to online communication, therefore, the platforms must be careful in how their businesses affect free expression,” Collins said in a statement.

“When it comes to online commerce, these platforms must be careful they don’t put consumers at increased risk of harm or facilitate illicit conduct. These expression and conduct issues raise different challenges that should not be conflated, but both issues can and should be discussed.”

Collins suggested that the platform companies’ business models shield them from market and other forces that leads them to lower levels of social accountability.

The ‘GAFA’ squad of companies respond to a hostile Congress

Witnesses at the hearing consisted of policy executives from the four major companies.

Google’s Director of Economic Policy Adam Cohen said that their work supports and accelerates innovation within other firms and open sources.

It’s a broad market because many Americans start their online searches for dedicated specialist competitors, he said.

Matt Perault, head of global policy development at Facebook, said that Facebook has “democratized” advertising by enabling small and medium-sized businesses to grow. Because there are low barriers of entry, new applications and technologies are constantly emerging.

Consumers benefit from all competition regardless of their business models, said Amazon’s Associate General Counsel Nate Sutton. Amazon’s mission is to be a customer-centric company and its success depends on its partnerships with third parties, he said.

We work hard to grow and retain consumer trust, said Kyle Andeer, vice president of corporate law at Apple. Every developer in the App Store abides by the same guidelines so that everyone has an “equal opportunity.” Apple continues to invest in resources and tools for developers, he said.

The panelists were asked about how their companies specifically devoted resources into promoting smaller, competitive firms. Perault said that Facebook looks to acquire “all services” that would be beneficial and bring value to their services.

Amazon is not the only way for merchants to advertise, said Sutton. Ebay, WalMart and Target are all examples of emerging online marketplaces. Moreover, the fastest growing market has a mixture of online and offline transactions, he said.

Rep. Lucy McBath, D-Ga., said that Amazon has been known to arbitrarily shut down merchant accounts “without explanation.” Sutton stated that Amazon has a “dedicated customer team” to which merchants can address their concerns. However, there are occasions where the firm takes “swift and immediate action” towards those whom it considers are “bad actors” selling on Amazon.

Google controls 90 percent of the search engine market in the U.S., said Rep. Jamie Raskin, D-Md., yet the company somehow claims that competition is “just a click away.”

The company evaluates Facebook’s terms and conditions on a regular basis, said Perault. He stated that Facebook has 2.7 billion users and that it is the parent company of WhatsApp, Messenger and Instagram.

Each of these four companies has a unique position in the market, said Rep. Hank Johnson, D-Ga., but Facebook is the “only one” with an edge in the social media market.

Because consumers have no other options, they have no choice but to accept these conditions, said Johnson.