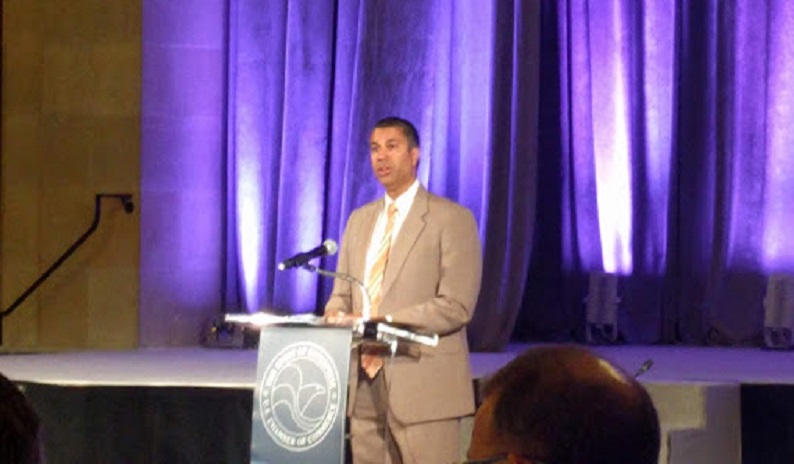 WASHINGTON, July 9, 2019 – With changes in the space industry, the U.S. government needs to evolve to capitalize on the “unprecedented opportunity for the commercial space sector,” Federal Communications Commission Chairman Ajit Pai said Tuesday at the U.S. Chamber of Commerce.

Pai emphasized the FCC’s commitment to craft forward-looking rules that safeguard the public interest as well as generate profit in the private sector. This, he said, is the only way to ensure that America remains the best place in the world to license and launch satellites.

He said that the FCC has moved quickly to give the green light to satellite entrepreneurs such as OneWeb, SpaceX and O3b. Companies that develop satellite constellations can help deliver fast, low-latency broadband service to millions of people in the United States and around the world, said Pai.

He presented a draft order allowing small satellite applicants, or “smallsats,” to choose a streamlined alternative to existing licensing procedures. This alternative would promote efficient use of spectrum and tailor the regulatory burden to the nature of deployment. It would also offer potential radiofrequency interference protection for critical communication links.

In other words, said Pai, streamlining the regulatory process will encourage increasing innovation in the space industry.

The global space economy is now poised to become an engine of sustained economic growth, said Christian Zur, executive director of the Procurement and Space Industry Council. The barriers of entry to commercial space have been lowered, however gaps to secure commercial space infrastructure still exist. The government’s role, said Zur, is to set the rules of use for the broader commons.

The functionality of satellites is increasing every day, said Brett McMillen, director at Amazon Web Services. AWS recently developed fully served satellite ground stations with minimal latency. In many cases, these stations can perform downlinks in minutes, he said, allowing data to be analyzed in new and different ways.