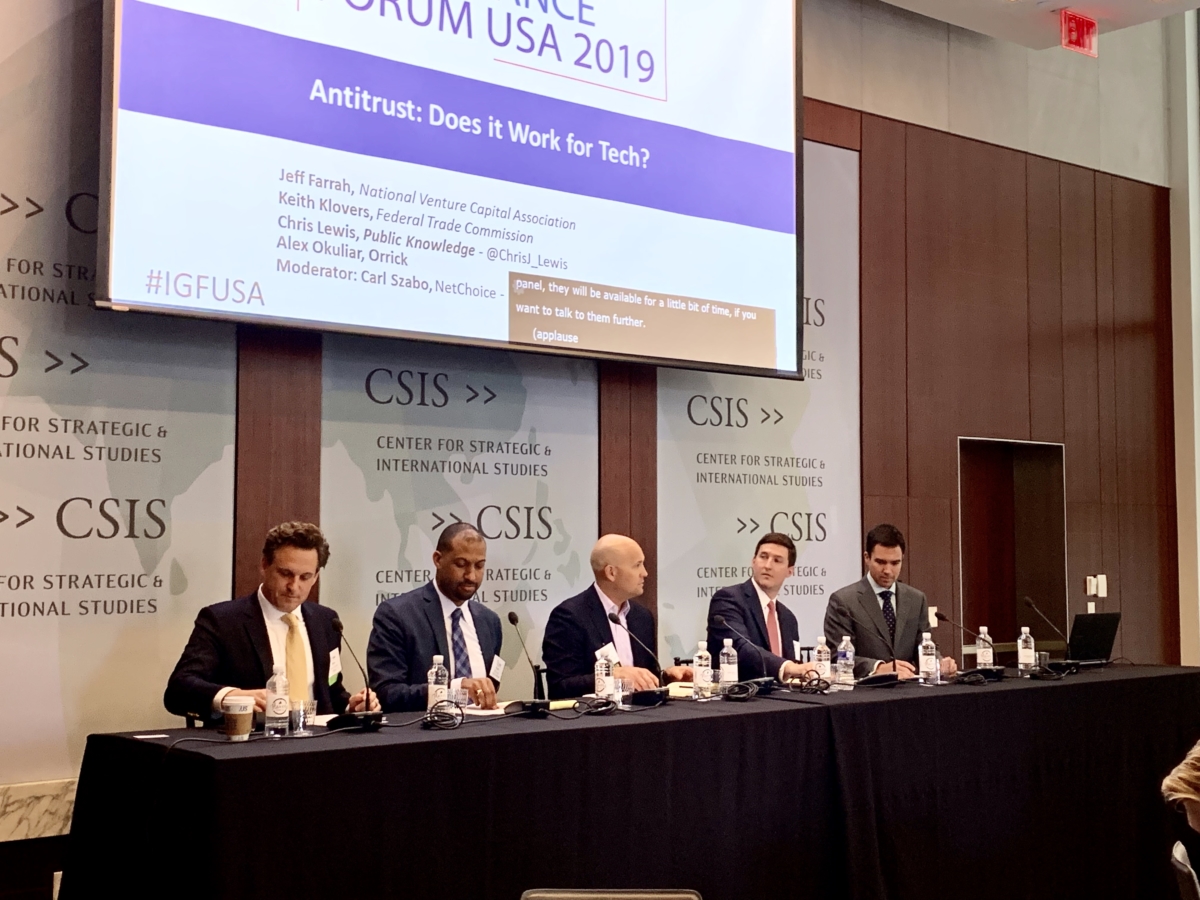 WASHINGTON, July 25, 2019 — The efficacy of antitrust enforcement against big tech companies was energetically debated at an Internet Governance Forum conference on Thursday.

The current consumer welfare standard sufficiently supports robust antitrust merger analysis, claimed Keith Klovers, an attorney advisor at the Federal Trade Commission. Although each new market and investigation has its own unique facts, the same law can still apply.

The Department of Justice and FTC are enforcement agencies, which limits their power to take action, said Public Knowledge President Chris Lewis. This creates a need for going beyond the limits of antitrust to protect the marketplace.

Another barrier to enforcement is the difficulty of discerning between efficiency-enhancing acquisitions and problematic acquisitions, said Orrick Partner Alex Okuliar.

We need some sort of nondiscrimination rule to promote competition, localism, and small independent voices in the marketplace, said Lewis, highlighting the need for a new metric to determine when a platform is dominant.

Current laws are very capable of addressing the issues at hand, argued Jeff Farrah, general counsel for the National Venture Capital Association. If the dominant operator is using its position to discriminate against companies that operate on the platform, that exclusionary content could be addressed under the existing law.

While the standard of “consumer welfare” could be more clearly defined, it’s a good standard, Farrah said, suggesting that antitrust laws should slowly evolve to reflect the market rather than being dramatically changed.

Things have changed since the days of Standard Oil, Lewis said. New mergers such as Facebook and WhatsApp are far less disruptive to the marketplace, due to the constant trend of rapidly changing technology.

The goal should not be to completely replace antitrust laws, Lewis said, but to implement “an appropriate complement based on analysis” that factors in technological developments like the rise of big data the Internet of Things.

Policymakers should consider using a cost of exclusion metric to measure the impact of network effects on digital platforms, Lewis continued. At some point, big social media platforms such as Facebook become so ubiquitous that there is a cost to individuals or businesses to not be on the network, potentially having a prohibitive effect on competition.

The discussion followed a tumultuous week for big tech, as Facebook disclosed on Wednesday that the Federal Trade Commission had opened an antitrust investigation into the company.

Antitrust action is also being considered against other tech giants such as Amazon, which Treasury Secretary Steve Mnuchin said on Wednesday has “destroyed the retail industry across the United States.”

(Picture of panel by Emily McPhie.)