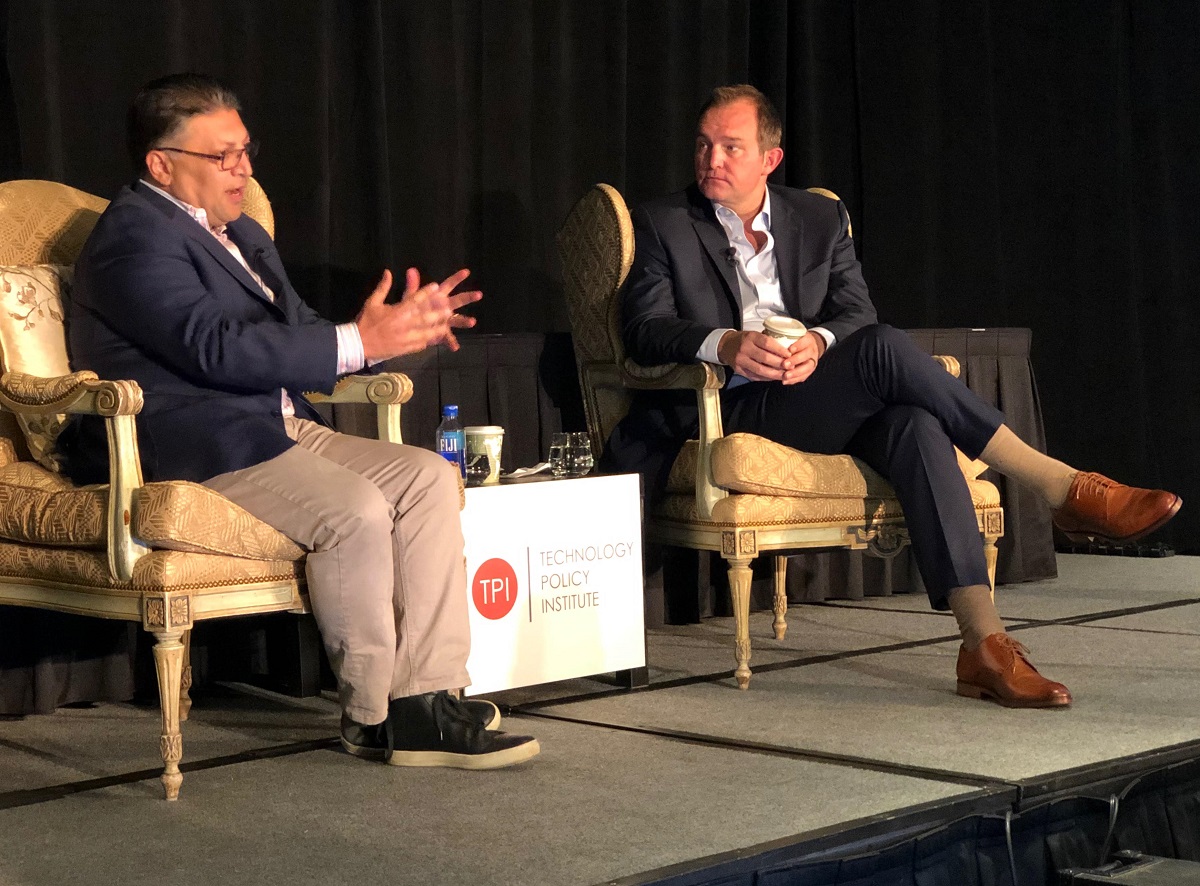 Photo of Makan Delrahim at Aspen Forum by Drew Clark

ASPEN, Colorado, August 20, 2019 – More than a dozen state attorneys general have launched an antitrust investigation of big tech giants, and they are working cooperatively with the Justice Department’s antitrust division, said Makan Delrahim, the division’s head.

“We come at this with no preconceived agenda,” said Delrahim in a Tuesday morning interview session at the Technology Policy Institute forum here.

As to the coordination between the state attorneys general and the Justice Department, “I would anticipate that it would be in a cooperative manner that benefits everyone.”

The state investigation was first reported late Monday by the Wall Street Journal. On July 22 the Justice Department announced a broad antitrust review of “whether and how market-leading online platforms have achieved market power are engaging in practices that have reduced competition, stifled innovation, or otherwise harmed consumers.”

In the interview session here with CNBC’s Senior National Correspondent Brian Sullivan, Delrahim declined to discuss the specifics of, or to confirm the existence of, a formal investigation of tech giants by the Justice Department.

And the tenor of his remarks was certainly not anti-technology.

“We are living at a time of incredible innovation and prosperity,” Delrahim said. “There are great efficiencies that have been brought to consumers” by these tech companies.

Still, it is “undeniable that people are asking questions about the market power of certain few companies.”

And while he said that it is not productive to lump all tech companies together, he mused: “Does Google compete with Facebook? You don’t go to Facebook to search, but from an advertising perspective, they might be [competing]. That is part of what an investigation would review.”

“Big, in and of itself, is not bad. It is big behaving badly,” he said. On that matter, he referenced the Justice Department’s antitrust case against Microsoft in the 1990s.

Delrahim also addressed the question that is increasingly discussed among antitrust experts: How can an antitrust action based on the consumer welfare standard proceed against companies, like Google and Facebook, whose consumer-facing products are free?

The answer is yes, he said. Just because the consumer doesn’t pay for the product doesn’t mean that you can’t look at antitrust effects based not just on price, but also on innovation and quality.

Referring to his speech at the University of Colorado law school at the Silicon Flatiron’s conference in February, Delrahim said that free-to-the-consumer industries like broadcast television have long been scrutinized by antirust regulators.

Delrahim also addressed two other recent telecom, media and technology industry antitrust matters: AT&T’s successful acquisition of Time Warner – over the objection of the Justice Department – and the agency’s recent approval of T-Mobile’s merger with Sprint, with conditions.

The Justice Department had been insisting upon the preservation of four national wireless carriers before approving the T-Mobile-Sprint merger, Delrahim said.

The merger was approved by the division after the two wireless companies agreed to spin off some spectrum assets to Dish Networks. The FCC issued its approval of the merger on Wednesday, although some state attorneys general plan to continue their suit to challenge.

Had the asset spinoff not been included, said Delrahim, “I would probably bring the same case against the merger.”

In the question-and-answer session in the interview, Delrahim addressed how the Justice Department enlisted Dish Network.

Divestiture would have solved “the competitive harm that we identified from the underlying merger,” but it wouldn’t have been able to “harness the very pro-competitive effects” that would have arisen with a fourth and new competitor in the marketplace, he said.

“We looked to see who could come in and step in and build the network,” an there were only real possibilities: Comcast, which he said had 10 megahertz of spectrum, and Dish Networks, with 95 megahertz.

“It has been sitting idle and not benefiting consumers. And Sprint had a good chunk [of that spectrum] that was not being used,” he said.

“The way this solution has come about will be not only very output enhancing,” but will, he said, hopefully lead to more quality and price effects.

“I was pleased that this was the solution that ultimately ensued, and hopefully that transaction will close sooner rather than later,” said Delrahim.