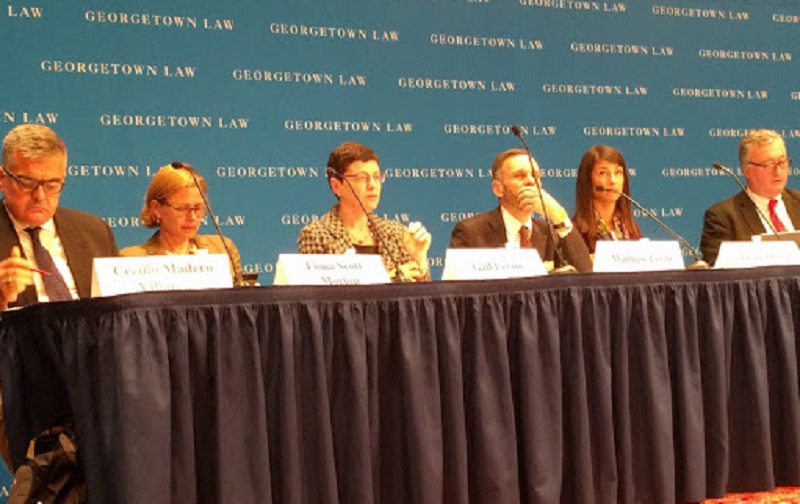 WASHINGTON, September 10, 2019 – The political world is all abuzz about breaking up big tech companies, but the overly broad breakup remedies being proposed by many are inconsistent with antitrust law as articulated by the Supreme Court, said Taylor Owings, counsel to the Assistant Attorney General for Justice Department’s Antitrust Division.

Speaking on a panel about “Big Data, Digital Platforms and Competition” at Georgetown University’s 2019 Global Antitrust Enforcement Symposium, Owings also said that policymakers need to determine what makes data valuable and how much effort it takes to create it.

Also speaking at the event was Bilal Sayyed, director of the office of policy planning at the Federal Trade Commission. In a keynote address, he highlighted the importance of privacy for antitrust law.

Another question to consider, said Fiona Scott Morton, professor of economics at Yale University, is if big data creates economies of scope and exclusionary conduct. Speaking on the panel with Owings, Morton said that experts cannot easily say that innovation has zero harm on consumers. Any evidence of possible consumer harm must be closely analyzed, she said.

Determining a value on privacy should also be a top priority. Right now, it’s difficult to establish the relationship between competition and privacy, said Matthew Levitt from Baker Botts, another panelist.

There is often a trade-off between the data a user submits and that which they receive, said Kevin Coates, counsel at Covington & Burling.

Gail Levine, deputy director of the Bureau of Competition at the Federal Trade Commission and another panelist, said that a much-debated topical question is whether antitrust agencies are ill-equipped to detect non-price effects of company mergers.

However, she added, competition is still the top priority among federal agencies.

Additionally, he said, we must determine the extent to which the ownership of data holders is challenged and how can dispensable information be secured.