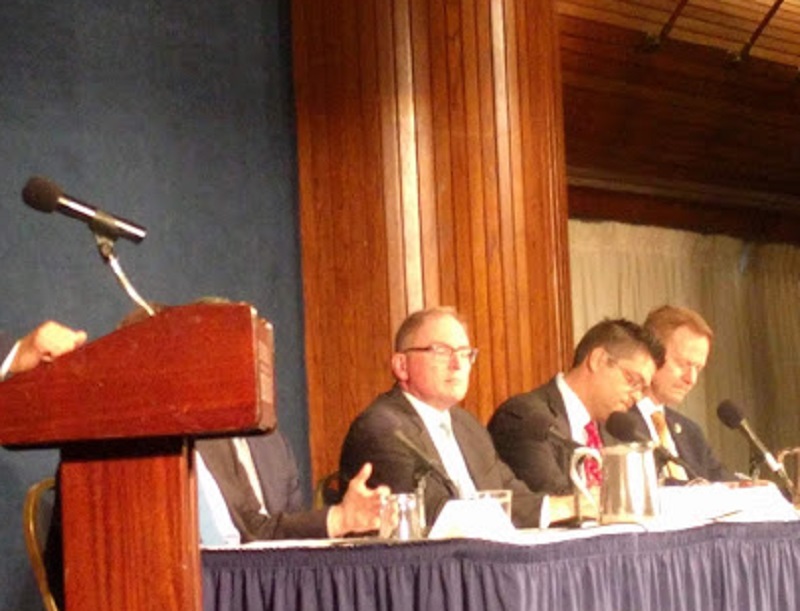 WASHINGTON, September 10, 2019- Federal agencies speaking at radiofrequency symposium hosted on Tuesday by the National Telecommunications and Information Administration Symposium expressed doubts that any kind of a national spectrum strategy would be useful.

Addressing speculation that the Commerce Department’s NTIA might unveil such a national spectrum strategy, the officials each seemed focused on their doubts that such a strategy would be beneficial for their respective agencies.

NASA’s main objective, he said, is to enhance interoperability by further cooperation with the commercial space industry and its international partners.

The Department of Defense occupies a great number of spectrum bands, said Colonel Frederick Williams, director of spectrum policy and programs at the Pentagon. He said spectrum has becoming increasingly congested.

Agencies must work together to combat spectrum issues, he said. The Citizens Broadband Radio Service, for instance, was established by the Federal Communications Commission as a way for shared wireless broadband use of the 3.5 GHz band.

The government has so many layers of spectrum management that it’s difficult to determine the exact process, said Ian Atkins, director of the Federal Aviation Administration spectrum strategy and policy.

The FAA is committed to utilizing the least amount of spectrum possible, he said. However, what the agency is looking for is a return of investment to make sure that valuable spectrum programs are enacted.

The hype surrounding the deployment of wireless 5G technology demonstrates that the public often gravitates its focus on a single set of technologies, said Christopher Szymanski, director of product marketing and government affairs at Broadcom. But there needs to be focus on the backhaul and wireless aspects of spectrum as well.

Cisco has projected increased usage of unlicensed spectrum in the coming years, said Szymanski. However, the U.S. lacks enough channels of spectrum to keep up with demand.

Hence why spectrum and infrastructure policies are necessary on both the state and federal level, said Hank Hultquist, vice president of federal regulatory for AT&T.

NTIA’s Evan Feinman spoke about what states need to keep in mind as they prepare for BEAD funds.

Photo of Evan Feinman from AEI

WASHINGTON, May 18, 2022 – The National Telecommunications and Information Administration webinar event on Tuesday focused on the Broadband Equity, Access, and Deployment Notice of Funding Opportunity. The webinar highlighted three important items to keep in mind as states begin to receive money for broadband planning.

The first, according to Evan Feinman, deputy associate administrator for BEAD, was for states to consider your office’s capacity. Each state will receive a minimum of $100 million. Very few states have the human resources required to adequately run a program of this magnitude, he said.

The second is to build up research and data collections of broadband coverage at a state level. The Federal Communications Commission will soon release a new mapping system. It will be necessary, said Feinman, to “engage meaningfully” with these maps using state’s own research and data. Furthermore, states should have the necessary data to engage with internet service providers and the NTIA as they determine who is served and unserved.

The planning step is a great point for stakeholders to become involved in the process, said Feinman. “There is an expectation that lives throughout this program that folks are going to engage really thoroughly and in an outgoing way with their stakeholders.”

See other articles on the NTIA webinars issues in the wake of the Notices of Funding Opportunity on the Broadband.Money community:

WASHINGTON, May 13, 2022—Just in advance of the deadline for the release of the funding requirements under the Infrastructure Investment and Jobs act, the four principal federal agencies responsible for broadband funding released an interagency agreement to share information about and collaborate regarding the collection and reporting of certain data and metrics relating to broadband deployment.

The Memorandum of Understanding is the latest development in federal efforts to coordinate high-speed internet spending, and the Treasury Department is the new addition to agreement.

The other three agencies signed a prior memorandum in June 2021 to coordinate the distribution of federal high-speed internet funds. That June 2021 Memorandum of Understanding remains in effect.

The respective Cabinet and Agency leaders announced that their agencies will consult with one another and share information on data collected from programs administered by the FCC, the USDA’s Rural Utilities Service, programs administered or coordinated by NTIA, and Treasury’s Coronavirus Capital Projects Fund and State and Local Fiscal Recovery Fund.

“No matter who you are or where you live in this country, you need access to high-speed internet to have a fair shot at 21st century success. The FCC, NTIA, USDA and Treasury are working together like never before to meet this shared goal,” said FCC Chairwoman Jessica Rosenworcel. “Our new interagency agreement will allow us to collaborate more efficiently and deepen our current data sharing relationships[and] get everyone, everywhere connected to the high-speed internet they need.”

Agriculture Secretary Tom Vilsack said, “When we invest in rural infrastructure, we invest in the livelihoods and health of people in rural America. High-speed internet is the new electricity.  It is necessary for Americans to do their jobs, to participate equally in school learning, to have access to health care and to stay connected.”

“USDA remains committed to being a strong partner with rural communities and our state, Tribal and federal partners in building ‘future-proof’ broadband infrastructure in unserved and underserved areas so that we finally reach 100 percent high-speed broadband coverage across the country.”

“Our whole-of-government effort to expand broadband adoption must be coordinated and efficient if we are going to achieve our mission,” said Alan Davidson, Assistant Secretary of Commerce for Communications and Information and head of the NTIA, the agency responsible for administering the vast bulk of the broadband funding.

“This MOU will allow us to build the tools we need for even better data-sharing and transparency in the future,” he said.

“Treasury is proud to work with our federal agency partners to achieve President Biden’s goal of closing the nation’s digital divide,” said U.S. Treasury Secretary Janet L. Yellen.  “Access to affordable, high-speed internet is critical to the continued strength of our economy and a necessity for every American household, school, and business.”

As part of the signed agreement, each federal agency partner will share information about projects that have received or will receive funding from the previously mentioned federal funding sources.  More information on what the interagency Memorandum of Understanding entails can be found on the FCC’s website.  The agreement is effective at the date of its signing, May 11, 2022.

Photo of Doug Brake from Information Technology and Innovation Foundation

WASHINGTON, March 18, 2022—Federal Communications Commission Chairwoman Jessica Rosenworcel and Assistant Secretary of Commerce Alan Davidson on Friday named staff representatives to participate on each other’s advisory committees. The effort is a component of the Spectrum Coordination Initiative of the FCC and the National Telecommunications and Information Administration of the Commerce Department.

As part of the initiative, the agencies are working with each other and the private sector.

“To succeed as spectrum partners, the FCC and NTIA must hear from and listen to each other in both formal and informal ways,” said Rosenworcel.

“A common understanding of spectrum engineering and market conditions is essential for the success of our efforts at the FCC and NTIA to manage the country’s spectrum resources,” said Davidson.

Davidson named Douglas Brake, a Spectrum Policy Specialist, and Timothy May, a Senior Advisor, to participate in the FCC’s Technological Advisory Council and its Communications Security, Reliability, and Interoperability Council, respectively.

Brake, a Spectrum Policy Specialist with NTIA, previously directed the broadband and spectrum policy work at the Information Technology and Innovation Foundation.  May currently serves as a Senior Advisor in the Office of the Assistant Secretary where he has worked for four years.  Before joining NTIA, he was a Policy Analyst in the FCC’s Public Safety and Homeland Security Bureau.