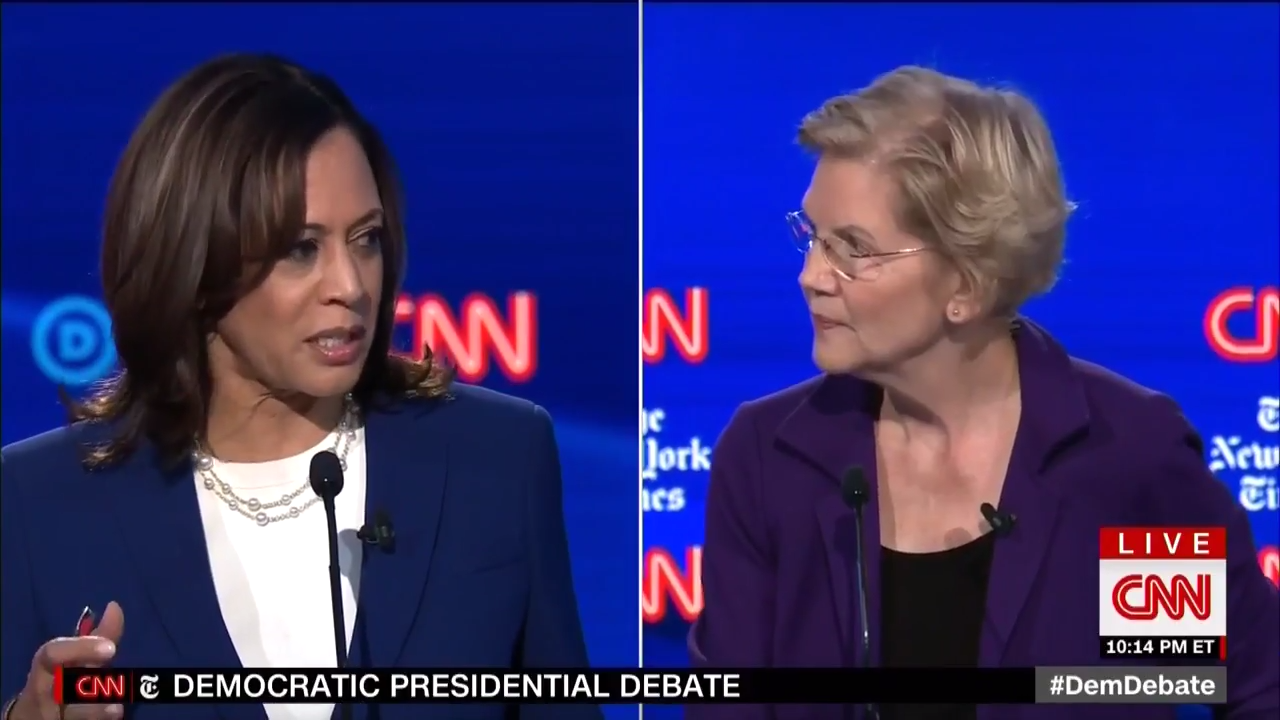 Screenshot of interaction between Sens. Harris and Warren on Trump and Twitter

Big technology companies were a big target during Tuesday night’s debate in Ohio of the leading Democratic presidential candidates.

But almost all who commented on the topic dumped on Silicon Valley powerhouses over their use of private data, their promotion of addictive screen-time behavior, and their alleged refusal to better police the content that appears online.

And everyone who commented on antitrust enforcement said they would appoint more vigorous and trust-busting law enforcement.

Former Rep. Beto O’Rourke of Texas promoted his arguments against Section 230 of the Communication Decency Act, a proposal to take liability away from internet companies don’t do more to remove hate speech from their web sites.

Without referring specifically to Section 230, his comments suggested that Facebook needs to take affirmative responsible as a “publisher” for all the content on its platform:

And while O’Rourke said he would “be unafraid to break up big businesses if we have to do that,” he criticized Warren for singling out particular companies. “I don’t think it is the role of a president or a candidate for the presidency to specifically call out which companies will be broken up.”

Andrew Yang wants a data check in the mail

In this tech-bashing segment of the debate, former tech executive Andrew Yang had the first word and the last word.

His first word was that breaking up big tech wasn’t the solution to reviving Main Street businesses because “network efforts” are a powerful forcing driving what is commonly referred to as a “winner take all” economy.

“And as the parent of two young children, I’m particularly concerned about screen use and its effect on our children. Studies clearly show that we’re seeing record levels of anxiety and depression coincident with smartphone adoption and social media use.”

He didn’t get a chance in that first answer to elaborate on the “21st century solutions” that he would use — as opposed to making use of Warren’s “20th century antitrust framework.”

But in his close-out remarks in the segment, he zeroed in on data privacy legislation as one way to turn the tide against the power of Big Tech:

Perhaps the weirdest interaction during the roughly 15-minute segment of the three-hour debate came when Sen. Kamala Harris, D-Calif., vainly attempted to pin Warren down on her own pet peeve: Pushing President Trump off of Twitter.

Two weeks ago, Harris told CNN that Twitter should suspend Trump’s use of the social media platform because of his “irresponsible” use of the platform, and that he was “using his words in a way that could subject someone to harm.”

When Harris got the platform on the topic on Tuesday night, she pivoted from blasting Facebook CEO Mark Zuckerberg for making a “ridiculous argument” about election disinformation to chiding Warren, the intellectual leader of the Democratic pack.

“I was surprised to hear that you did not agree with me that on this subject of what should be the rules around corporate responsibility for these big tech companies, when I called on Twitter to suspend Donald Trump’s account,” Harris said.

“So, look, I don’t just want to push Donald Trump off Twitter,” Warren replied. “I want to push him out of the White House. That’s our job.”

On the issue of breaking up Facebook, Google and Amazon, Warren stood her ground: “Look, I’m not willing to give up and let a handful of monopolists dominate our economy and our democracy.”

“We need to enforce our antitrust laws, break up these giant companies that are dominating, big tech, big pharma, big oil, all of them,” she said.

But Warren appeared disinclined to talk specifically about Big Tech, and kept coming back to “the elephant in the room, and that is how campaigns are financed.”

Continuing, Warren said, “I announced this morning that I’m not going to take any money from big tech executives, from Wall Street executives. We’ve already agreed, Bernie and I, we’re not taking any money from big pharma executives. You can’t go behind closed doors and take the money of these executives and then turn around and expect that these are the people who are actually finally going to enforce the laws. We need campaign finance rules and practices.”

Other views on big tech and antitrust

Steyer used his less-than-two-minutes-of-fame on the topic to “agree with Sen. Warren that, in fact, monopolies have to be dealt with. They either have to be broken up or regulated, and that’s part of it.”

But he quickly pivoted to promoting his biography as a billionaire:

Senators Cory Booker, of New Jersey, Amy Klobachur, of Minnesota, and Bernie Sanders, of Vermont, and former Secretary of Housing and Urban Development Julian Castro, all said they would be more aggressive in antitrust enforcement.

Former Vice President Joe Biden and Mayor Pete Buttigieg did not weigh in on the subject., and Rep. Tulsi Gabbard was cut off when she began to comment on tech.