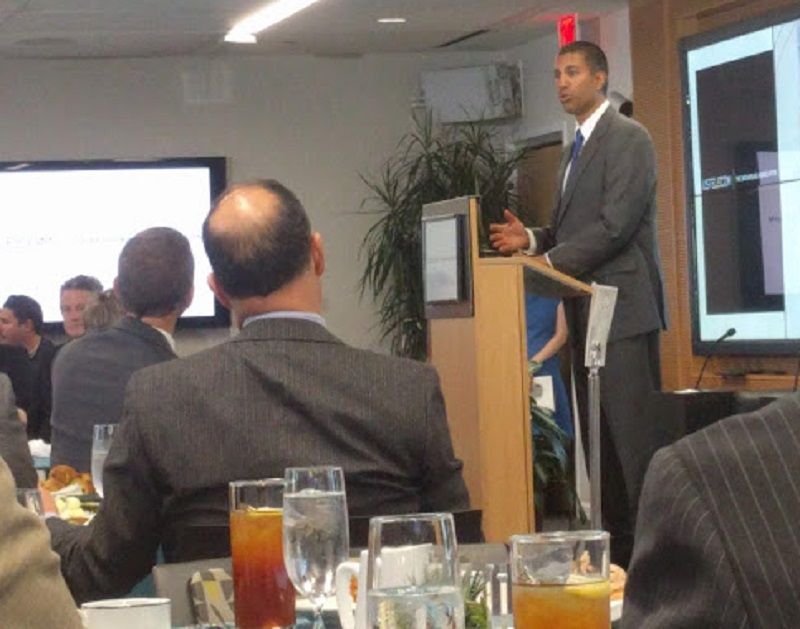 Photo of Ajit Pai at US Telecom event by Masha Abarinova

WASHINGTON, October 24, 2019 – US Telecom on Thursday praised legislators and a regulator who have promoted their framework for ensuring that high-speed broadband remains a top national policy concern.

The lobbying group for the biggest telecom companies did so at a broadband investment forum event honoring their “broadband heros” that they said had made significant strides to improve connectivity.

The progress made by the FCC’s regulatory streamlining, Pai said, has provided much improvement for the agriculture and education sectors. Wireless internet has become so advanced that children are able to seamlessly upload their schoolwork through McDonald’s Wi-Fi, he said.

Broadband has come far in only a quarter of a century, said Wicker. Yet bipartisan support is needed to address current broadband’s key issues, such as low-quality mapping. The companies represented here today, he said, will play a major role in winning the “race to 5G.”

Telecom’s role has gone beyond merely providing and building service, said Koester. Broadband leaders now need to educate the public about the issues and the best practices for improving them.

A panel featuring prominent industry leaders discussed the federal government’s role in adopting faster internet and how fiber optic broadband can help with that.

The support mechanisms for broadband funding are in a winner-take-all environment, said Tony Clark, senior advisor at Wilkinson Barker Knauer. Some incumbents receive more subsidies than others, and the incumbents without the mechanism are expected to fulfill the same obligations.

Delivering a high-speed, low latency connection involves determining the trade-offs for that result, said Paroma Sanyal, senior consultant at The Brattle Group. If providers are only focusing on costs, then the outcome of the infrastructure will be different.

The keys to 5G success, Sanyal said, are the backhaul process and low-latency technology that allows for precision agriculture. That is why fiber is a future-proof technology that is very beneficial for 5G growth.

Machine learning on how to develop broadband and fiber, said Windstream President and CEO Tony Thomas, has caused providers to make highly informed decisions. As a result, broadband is now available in areas that a few years ago were barely connected.

The leap to 5G could be the fourth Industrial Revolution, said Kathy Grillo, senior vice president of public policy and government affairs at Verizon. Not only is fiber needed everywhere to receive 5G connectivity, she said, regulatory policy needs to be developed to start building these networks.

But before 5G can be properly implemented, the panelists emphasized the need to address rural coverage gaps.

Billions of dollars have been invested into digital infrastructure for the past 20 years, said US Telecom CEO Jonathan Spalter. The government can provide indispensable input to accelerate rural connectivity, he said, particularly through the FCC’s Rural Digital Opportunity Fund.

Going forward, the FCC needs to make sure subsidies are effectively distributed so that incumbents don’t walk away from any viable options, said Consolidated Communications CEO Bob Udell.

The partnership between the public and private sectors, Udell added, is imperative for broadband opportunity.