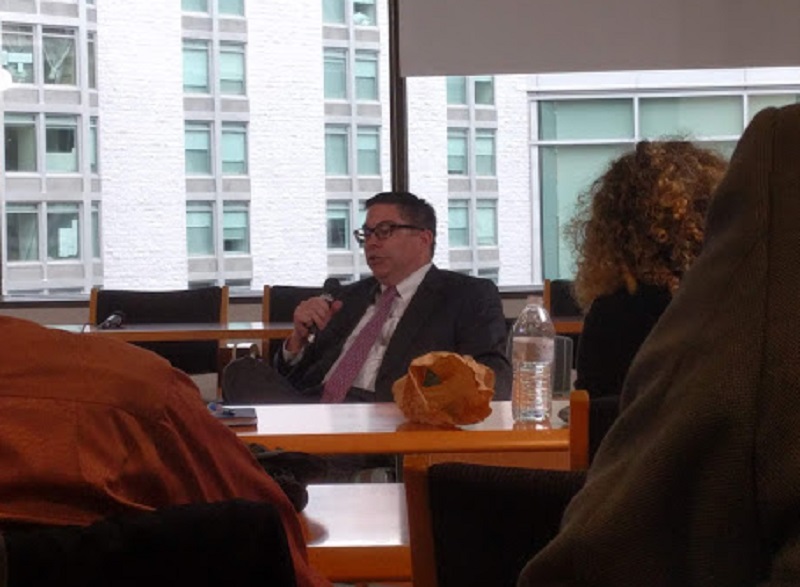 WASHINGTON, October 9, 2019 – Proposals to allocate C-Band spectrum to terrestrial wireless providers are getting close to  action decision-making. However, questions remains about whether to conduct a public or private auction for the right to use mid-band frequencies, as well as how much spectrum will be allocated for 5G deployments.

The Federal Communication Commission’s priority is to expedite the process and reallocate as much mid-band spectrum as possible, said Commissioner Michael O’Rielly at the Capitol Forum’s C-Band conference on Tuesday. He said that 300 megahertz of spectrum, would be an ideal amount for spectrum reallocation.

O’Rielly said that a C-Band private auction would be much like an auction conducted by the FCC. He said he was also optimistic about the agency’s other projects, such as the 2.5 Gigahertz (GHz) auction, the OnGo project of the Citizens’ Broadband Radio Service, and reallocation of Universal Service Fund dollars.

However, O’Rielly advised against providers getting “greedy” with expanding C-Band’s services. There are few things that the FCC has done without generating some backlash.

Panelists representing various telecom companies had conflicting opinions on the effectiveness of a public or private auction.

The future of connectivity rests in the hands of a bottom-up, market-led C-Band proposal, said Peter Pitsch, head of advocacy and government affairs at C-Band Alliance, or CBA. He argued that a private auction would ensure one accountable entity to preserve consumers’ economic interests and make spectrum more useful.

Small satellite providers don’t have to lose for 5G to win, Pitsch said. The C-Band Alliance can increase the 200 megahertz allocation in a timely and efficient manner. The alliance’s approach would allow C-Band to quickly enter the market equipped with a mechanism that determines its causes and effects on society.

The FCC has a long way to go before it can clear spectrum and make internet users whole, said Ross Lieberman, senior vice president of government affairs at ACA Connects. ACA’s 5G Plus would not only allow users to participate in the auction but provide reimbursements and incentive payments for the parties involved.

Without the fiber backbone necessary for mid-band spectrum, he said, 5G wireless service would be difficult to provide.

It’s an unavoidable fact that C-Band spectrum is critical for 5G mobility, said Colleen King, vice president of regulatory affairs at Charter Communications. More fiber will provide the path to reallocate spectrum for 5G and protect incumbents in the process.

Yet there is a lot of risk regarding the critical band of untested spectrum, she said. Private sales could raise objections and ultimately slow down reallocation.

Michael Calabrese, director of the Wireless Future Project at New America’s Open Technology Institute, said that a private auction is hardly in anyone’s interest, save for a few major carriers.

Any type of private sale, Calabrese said, would violate section 309(j)(1) of the Communications Act and would be a “horrible” precedent for policy purposes.

The FCC doesn’t need an elaborate auction to reallocate 200 megahertz of spectrum, he said. Advancing to future bands will require an auction to pay incumbents.

Some of the representatives of major cellular carriers have their doubts about the FCC’s ability to provide oversight in a public auction.

The FCC is not poised to make improvements for 5G’s “sweet spot,” said Patrick Welsh, assistant vice president of wireless policy development at Verizon. What’s important is that CBA is uniquely situated to auction and clear spectrum.

A private auction with the necessary guardrails, he said, is essential for timely deployment of the C-band. If there is no incentive auction, small satellite providers would be unable to participate.

On the other hand, private companies have significantly fewer resources than the FCC, said Grant Spellmeyer, vice president of federal affairs and public policy at US Cellular. Even though a private auction could be shorter, what matters is that the bidding process maintains integrity and that sellers have an adequate chance of receiving spectrum.

Moreover, the need for regulation doesn’t go away during a private auction, said Steve Sharkey, vice president of government affairs at T-Mobile. The CBA has been very vague about the details of their auction and will likely allow excess selling of spectrum, he said.

Until CBA makes clear how additional spectrum will be available, Sharkey said, a private sale doesn’t seem like a viable opportunity.

The main issue, Hendricks said, is how long the auction takes. But ultimately, it’s not a binary choice between the FCC having complete oversight and the agency having no role in the process. The FCC’s capability of understanding spectrum issues, he said, will prove beneficial in either a public or private reallocation.

With or Without Negative Latency, Google Stadia Likely to Massively Churn Broadband Bandwidth