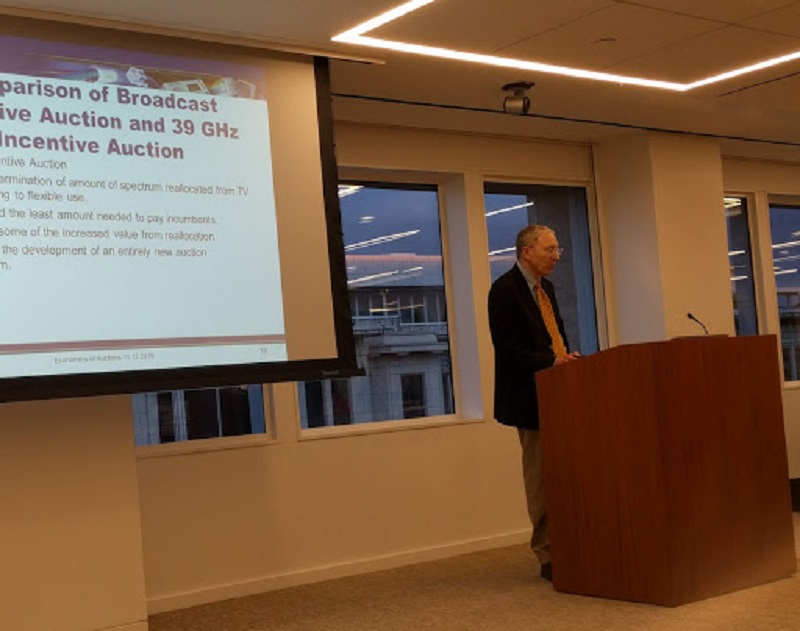 WASHINGTON, November 12, 2019 – Increased attention surrounding next June’s impending C-Band spectrum auction was the occasion for legal experts to address the ways in which the Federal Communications Commission has improved its auction process – as well as how clients can improve communication during the bidding process.

Innovation in auctions is key as spectrum policy becomes more complex, said FCC Office of Economics and Analytics Acting Chief Giulia McHenry at a FCBA Wireless Telecommunications Committee event Tuesday. Auctions are no longer limited to the wireless space, she said, as they encompass radio airwaves, television as well as the Universal Service Fund.

The reality is that there is no more greenfield spectrum available, McHenry said. There needs to be a way to share spectrum with existing users as the number of incumbents increase. Satellite companies particularly, she said, are incumbents that use a great amount of current mid-band spectrum.

The FCC retains four priorities with future spectrum proceedings, McHenry added. Make significant spectrum available for 5G wireless services, deploy it quickly, provide auction revenue for the U.S. Treasury and make sure that users get the amount of spectrum that they need.

Looking back at how the agency has transformed its auction process, said FCC Office of Economic Advancement and Analytics Auctions Division Chief Margaret Weiner, is beneficial for future endeavors. Over the years, physical bidding seminars have been replaced with online tutorials and an online application process for bidders.

Electronic auction participation used to be much more costly, Weiner said. The relationship between the bidding system and the bidding interface has changed dramatically. For example, online adaptation has mitigated the frequencies of “fat-finger” bids, where participants place a bid that was higher than intended.

Another key change, she added, is how the FCC determines eligible entities for auctions. Not only is participation offered at a license-by-license basis, but the agency also created credit caps to better support small business and avoid unjust enrichment of large incumbents.

As accessible as the FCC has made auction processes, said Wilkinson Barker Knauer Partner Jonathan Cohen, clients and lawyers involved need to better understand auction rules. This is especially important if they are unaware of certain regulations, such as buildout requirements and license renewal expectancy.

One of the most important auction aspects to understand, Cohen said, is knowing what behavior constitutes as prohibited communication. Industry members don’t necessarily agree to these regulations, he said, however the FCC can impose meaningful penalties to those that fail to comply.

Bigger companies are more at risk to fail compliance, Cohen continued, because they tend to have a large volume of business units. These units are more likely to discuss auction proceedings internally rather than with the FCC auction staff.

To avoid compliance problems, Cohen suggested some ways that auction participants can improve the system. A built-in redundancy system with more than one authorized bidder, he said, can help expedite the process and ensure bidders don’t miss their rounds.

Overall, said Cohen, clients should understand the limitations of the auction staff and avoid asking them questions that they cannot answer. Lawyers in turn should avoid sharing bids or bidding strategies if they represent multiple clients in the same auction, for the sake of competition.