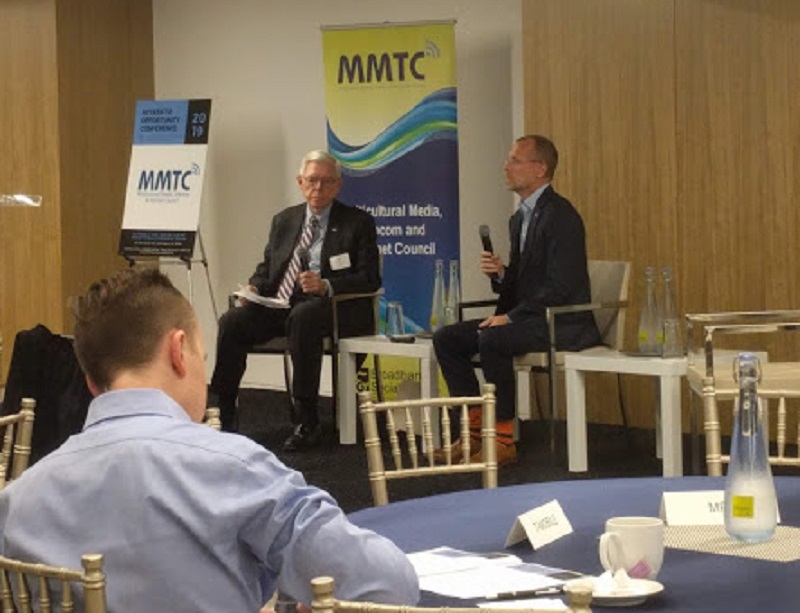 Photo of Dick Wiley and Brendan Carr by Masha Abarinova

In a keynote question and answer session, former Federal Communications Commission Chairman Dick Wiley – who served under Presidents Richard Nixon and Gerald Ford — discussed with FCC Commissioner Brendan Carr the ways in which the agency can improve broadband inclusion.

5G wireless services, Carr said, will be the next step in achieving broadband equity. The transition from 4G to 5G service will be just as impactful as the move from the previous generation of 3G coverage, he said.

Carr also underscored the importance of the T-Mobile-Sprint merger for streamlining 5G wireless infrastructure. These two companies combined, he said, will unleash an unprecedented level of competition and facilitate a 5G buildout of 99 per cent.

The topic of 5G services includes the discussion of mid-band or “C-Band” spectrum. However, Carr advised the broadband community to not overly rely on obtaining one type of spectrum.

The United States currently has the most high-band spectrum in the world, he said. To provide high-speed broadband to both rural and urban areas, there needs to be a combination of high, mid and low-band spectrum available.

For that reason, Carr said, a transparent, public C-Band auction that frees up at least 300 Megahertz of spectrum is needed.

But just as it is crucial to “future-proof” 5G deployment, Carr encouraged reforming current programs, such as the Universal Service Fund, to provide more accessibility to marginalized Americans.

Also in attendance were some industry leaders, who advised how to prepare people for the “jobs of the future.”

“5G” is not only a buzzword but a symbol of innovation, said Marie Sylla-Dixon, vice president of Federal Government and External Affairs at T-Mobile. Not only will it foster digital inclusion, she said, but it will also change how the U.S. interacts with the rest of the world.

It’s critical to determine the skills workers need for future jobs and apprenticeships. Current technology is making a lot of jobs disappear, said Marcella Gadson, director of Communications and Policy Research at MMTC.

Despite the job disruption, she said, new technology can be an opportunity for low-income Americans to advance their careers and take on life-changing tasks to aid the digital economy.