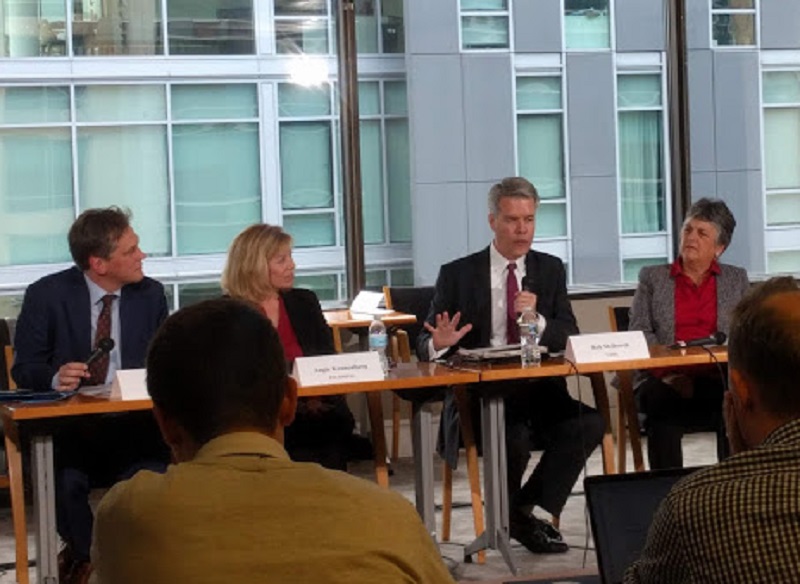 Photo of event at the Capitol Forum by Masha Abarinova

WASHINGTON, November 14. 2019- Despite the approval of the T-Mobile-Sprint merger by the Federal Communications Commission and the Department of Justice, 16 state attorneys general are still determined to block the acquisition. Policy experts at Thursday’s Capitol Forum conference advocated both the benefits and drawbacks of the merger, as well as how it will affect competition in the wireless industry.

The state AGs will have a hard time proving that the merger is harmful to consumers, said Former FCC Commissioner Robert McDowell. A substantial amount of competition analysis, he said, is necessary to show that higher pricing and other adverse effects may arise.

The agencies’ decision is the correct call, McDowell continued, because the FCC has the public interest standard in mind, whereas the DOJ has the antitrust expertise to support it.

Sprint alone cannot build a nationwide coast-to-coast 5G wireless network, said McDowell. The carrier has deployed the service in only nine cities so far, and T-Mobile is expanding their 5G coverage at a much more rapid pace.

Competition is ultimately the best enforcer of the merger, he said, with customers leading the drive-testing for innovation.

DISH holds a unique place in this transaction, she said, because unlike other merger participants, it will develop its own 5G wireless network and subsequently help users transition from 4G services.

A fourth major wireless network, Kronenberg added, is necessary to help consumers get the service they need. Moreover, DISH has a history of disrupting entrenched markets, such as broadcast radio and satellite services. It doesn’t seem far-fetched for DISH to enter the wireless market as a full-fledged, 5G facilitated network, she said.

Billions of dollars are at risk if DISH fails to meet its buildout requirements in the allotted timeframe, Kronenberg said. That’s why the company has huge incentives to increase 5G rollout rates that can put immediate downward pressure on pricing.

On the opposing side of the merger, Deborah Goldman, director of Research and Telecommunications Policy at Communication Workers of America, argued that it may not deliver the services promised and have unilateral anticompetitive effects.

Goldman referred to Commissioner Jessica Rosenworcel’s past statement about the harm the merger may bring to the distribution of mid-band spectrum. The FCC can better serve the public interest, she said, if it explored alternative options to a price-rising, competitor-killing merger.

DISH Network has also been underperforming in sales the past few years, Goldman continued, making it unlikely that DISH can replace the competition lost by the merger.

Market structure, Goldman said, is key in disruption. Even if there is an excess capacity of spectrum, the wireless market is still highly influenced by competitors. It’s also not entirely certain that Sprint alone is unable to rollout 5G services, she said, as the company possesses thousands of small cell tower leases and spectrum assets from its corporate owner, SoftBank.

Regarding the litigation process itself, legal experts at the conference said that the states have a tough case to make and that the attorneys present must be careful not to politicize the trial.

A horizontal merger has the presumption that the judge will defer to the state, said Corey Roush, partner at Akin Gump. State AGs will need ample time to prove that the merger is anticompetitive and establish a counter-narrative to what the government is putting forward.

However, Roush added, since the trial will not take place in D.C., where judges are more deferential to the federal government, the state clients have a slightly better chance of winning the case. The defendants need to prove that they have the right market to build upon the merger, he said.

The federal government can make a case that Sprint is ill-equipped to move forward with 5G alone, said Baker Botts Partner Michael Perry, if the company’s current shares do not reflect the wireless market’s competitive reality.

Moreover, the current presidential administration has not been aggressive as it would like with antitrust enforcement, Perry added. It would be unwise for the federal defendants to take a partisan stance against the state AGs, since state antitrust enforcers may have different political interests.

It would be a big loss for states, Roush said, if the court makes it appear that the White House is influencing its decision. It may cause states without a predominant Democratic population, such as Texas, to pull out of the trial and have unforeseen complications on the national wireless market.