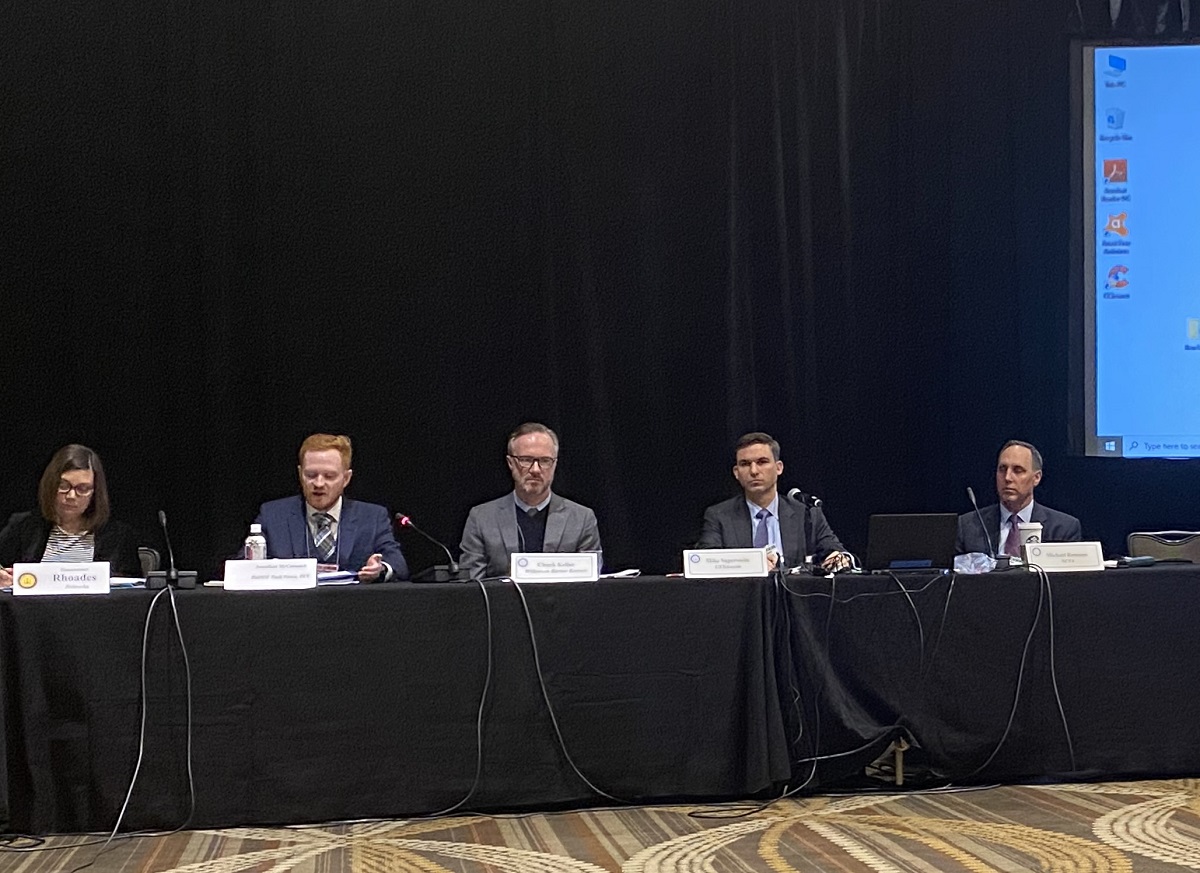 WASHINGTON, February 11, 2020 – A panelists on the new rural funding program  at the National Association of Regulatory Utility Commissioners’ winter forum generated a start difference of view from two Washington insiders.

Saperstein believes the FCC was correct in pushing for higher latency services, and that Earth-based providers should be prioritized. But Keller touted satellite providers’ role in offering broadband service and wished the FCC developed a more “nuanced” latency benchmark.

Keller believes some areas will be left out that might have received service under other latency guidelines.

Saperstein believes this change will save money and adds an incentive for timely buildout. He said many bidders would not have been able to access the amount of credit needed to participate in in the fund.

NTCA Industry Affairs and Business Development Senior Vice President Michael Romano argued with Saperstein’s complimentary review of the 50/5 Megabits per second (Mbps down/up) aspect of the rural fund. Romano said it should provide service for the next decade, and that 50/5 Mbps was a low goal for that timeframe.

Romano also voiced concerns about the 5 Mbps upload speed. “The internet is not just about streaming Netflix,” he said. He said that symmetrical speeds will be crucial for future broadband service.

The FCC made a last-minute change to the fund proposal when it expelled areas that receive state subsidies for broadband buildout. Romano said the FCC could have used this as an opportunity to allow bidders to “leverage” state and federal programs to get better broadband.

Romano also called for clarification as some areas have loans but not grants, meaning borrowers might qualify for the fund if the language was clearer.

Jonathan McCormack, a member of the Rural Digital Opportunity Fund task force, said the FCC is worried that if efforts are turned to fixing mapping, then broadband deployment will continue to be delayed instead of moving ahead.

NCTA said the FCC should deny exclusive access to these buildings, but not exclusive wiring agreements.

On Tuesday, the FCC opened a new round of comments into its examination of competitive broadband options for residents of apartments, multi-tenant and office buildings.

In a Tuesday ex parte notice to the commission, which follows a formal meeting with agency staff on September 2, the NCTA said the record shows that deployment, competition, and consumer choice in multiple tenant environments “are strong,” and that the FCC can “promote even greater deployment and competition by prohibiting not just cable operators, other covered [multiple video programming distributors], and telecommunications carriers, but all broadband providers from entering into MTE exclusive access agreements.

The organization, whose member companies include Comcast, Cox Communications and Charter Communications, also said it should continue to allow providers to enter into exclusive wiring agreements with MTE owners. Wiring just means that the provider can lay down its cables, like fiber, to connect residents.

The NCTA also told the FCC that there would be technical problems with simultaneous sharing of building wires by different providers and vouched for exclusive marketing arrangements, according to the notice.

The FCC’s new round of comments comes after a bill, introduced on July 30 by Rep. Yvette Clarke, D-New York, outlined plans to address exclusivity agreements between residential units and service providers, which sees providers lock out other carriers from buildings and leaving residents with only one option for internet.

Reached for comment on the filing, a spokesman for NCTA said they had nothing to add to the filing, which was signed by Mary Beth Murphy, deputy general counsel to the cable organization.

WASHINGTON, September 8, 2021 – A client of a company that has been included in a list of companies the Federal Communications Commission said pose threats to the security of the country’s networks is asking the agency to reconsider including the company.

In a letter to the commission on Tuesday, Diversified Communications Group, which installs and distributes two-way radio communications devices to large companies, said the inclusion of Hytera Communications Corporation, a Chinese manufacturer of radio equipment, on a list of national security threats is “absurd” because the hardware involved is not connected to the internet and “does not transmit any sensitive or proprietary data.

“It seems that Hytera has been lumped in with other Chinese companies on the Covered List simply because they happen to manufacture electronics in the same country,” Diversified’s CEO Ryan Holte said in the letter, adding Hytera’s products have helped Diversified’s business thrive.

“This is a wrong that should be righted. Hytera is not a national security risk. They are an essential business partner to radio companies throughout the U.S.,” the CEO added.

In March, the FCC announced that it had designated Hytera among other Chinese businesses with alleged links to the Communist government. Others included Huawei, ZTE, Hangzhou Hikvision Digital Technology, and Dahua Technology.

List among a number of restrictions on Chinese companies

This list of companies was created in accordance with the Secure Networks Act, and the FCC indicated that it would continue to add companies to the list if they are deemed to “pose an unacceptable risk to national security or the security and safety of U.S. persons.”

Last month, the Senate commerce committee passed through legislation that would compel the FCC to no longer issue new equipment licenses to China-backed companies.

Last year the U.S. government took steps to ensure that federal agencies could not purchase goods or services from the aforementioned companies, and had previously added them to an economic blacklist.

In July, the FCC voted in favor of putting in place measures that would require U.S. carriers to rip and replace equipment by these alleged threat companies.

The Biden administration has been making moves to isolate alleged Chinese-linked threats to the country’s networks. In June, the White House signed an executive order limiting investments in predominantly Chinese companies that it said poses a threat to national security.

The $3.2-billion program, which launched in May, provides a broadband subsidy of $50 per month to eligible low-income households and $75 per month for those living on native tribal lands, as well as a one-time reimbursement on a device. Over 1160 providers are participating, the FCC said, who are reimbursed the cost to provide the discounted services.

The agency has been updating the public on the number of participating households for the program. In June, the program was at just over three million and had passed four million last month. The program was part of the Consolidated Appropriations Act of 2021.

“Enrolling five million households into the Emergency Broadband Benefit Program in a little over three months is no small feat,” said FCC Acting Chairwoman Jessica Rosenworcel. “This wouldn’t have been possible without the support of nearly 30,000 individuals and organizations who signed up as volunteer outreach partners.”

Rosenworcel added that conversations with partners and the FCC’s analysis shows the need for “more granular data” to bring these opportunities to more eligible families.

The program’s strong demand was seen as far back as March.