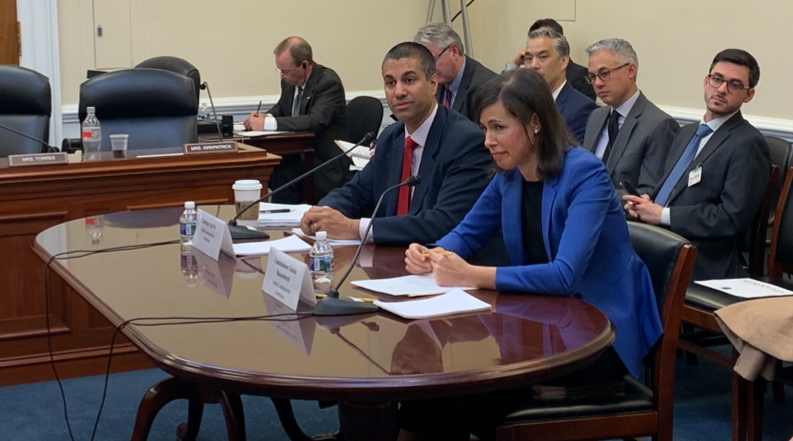 Quigley had just asked the two commissioners, who travelled to Hill on Wednesday to request funds for the FCC’s 2021 fiscal year, for the agency’s “best guess how long would it take to fix the maps.”

Rosenworcel, a vocal critic of her own agency’s lambasted broadband maps, said “we can have really significant improvements within 3 to 6 months.” Pai cut off his colleague to correct the record: “That is flatly incorrect.”

“It’s certainly not three to six months. It’s much longer than that,” Pai responded.

More fault lines emerged when the hearing turned to the issue of net neutrality. Pai was the leading force behind the FCC’s decision to reverse net neutrality regulations in December 2017, at the behest of communications companies and against the wishes of many public interest groups.

Rosenworcel blasted the FCC for allegedly doing “everything in its power to make sure no one noticed” that it sought public comment on its 2017 net neutrality proposal.

Rosenworcel also mentioned how the phrase “net neutrality” did not once appear in the FCC’s official request for comment. “This process should concern you,” Rosenworcel said.

Rosenworcel and Pai’s divergent attitudes toward robocalls further electrified the tiny hearing room in the Capitol.

Rosenworcel harshly criticized her own agency’s resources to combat robocalls, repeating three times throughout the hearing that it takes the FCC on average 649 days to complete one enforcement action on robocalls

This is partly due there only being 12 FCC staff assigned to robocalls, Rosenworcel said. “It’s like trying to empty the ocean with a teaspoon.”

Meanwhile, Pai assuaged the congressmen that enough resources are currently allocated to dealing with robocalls.

“Those things take time to investigate,” responded Pai, adding that FCC employees have done “a terrific job” on prosecuting robocalls.