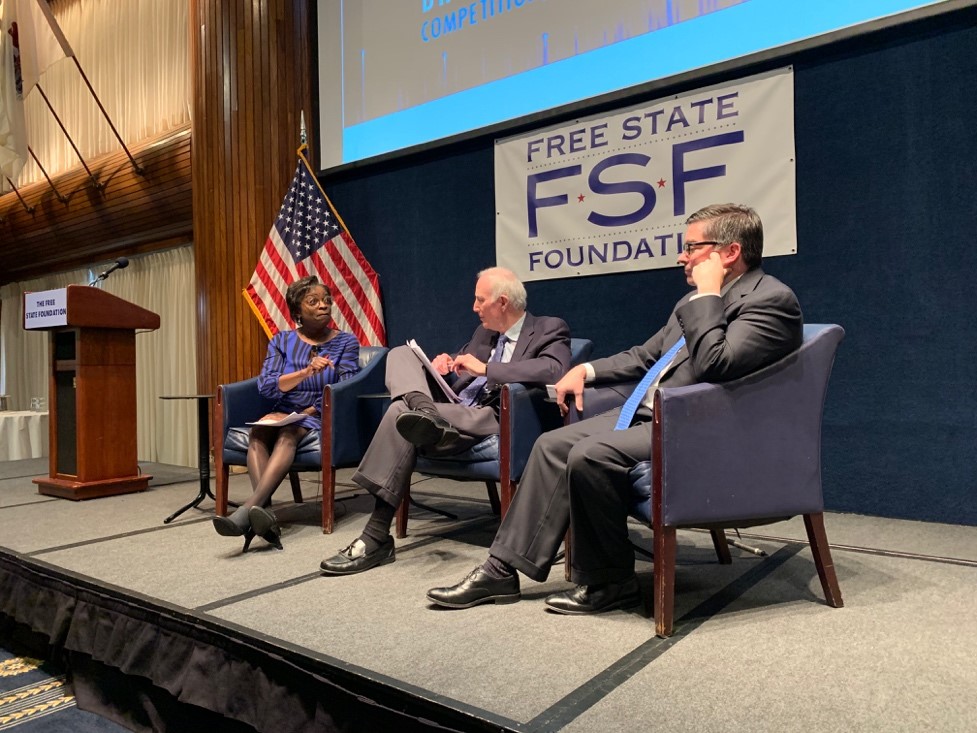 The event, during one of the last few days in which Washington was operating on a formally “normal” basis, showcased the differences and similarities between these two public servants.

For example, foundation President Randolph May asked, “What is the most memorable movie you’ve watched in the past year?”

Clyburn answered Just Mercy, the movie starring Jamie Foxx as a man fighting to overturn the death penalty for a crime he didn’t commit. “It reinforced my purpose,” said James.

O’Rielly thought for a moment, and answered Sing, a movie about animals that enter a singing competition. “I watched it with my daughter,” O’Rielly said, adding that “it was her first movie.”

“What makes or made you happy doing this job?” asked May.

The commissioners shared a smile and agreed that it is when someone says “thank you” for the work you are doing.

O’Rielly began his charge as FCC Commissioner in 2013 and Clyburn ended hers in 2018. Hence they worked together – and clashed – for five years on policy issues. Their differences showed.

On the subject of telehealth, Clyburn insisted that the FCC is “responsible for connected devices and greenlighting them.” That was why she pushed for the Connect2Health task force while at the FCC, an action that took a lot of heat, Clyburn said.

Meanwhile, O’Rielly relegated the role of building telehealth to “all the other agencies that have more resources.”

On the subject of net neutrality, Clyburn had this to say: “I thought the FCC split its shorts.” Clyburn disagreed vehemently in the FCC’s 2017 decision to reverse net neutrality, a decision O’Rielly was highly in favor of. She specifically took issue with labelling the internet as “an information service,” arguing that the FCC has no authority to support an entity labelled as such.

O’Rielly meanwhile criticized how proponents for net neutrality constantly changed the narrative of their arguments. Sometimes it was about price rates from ISPs, other times it wasn’t, O’Rielly said. He was especially critical of the long-held idea of making a new bureau to regulate throttling. “It was lunacy then and it’s the same lunacy now.”

Lastly, the two commissioners addressed the uptick of opposition towards media regulation restrictions. O’Rielly said that the current definition of the market will cause there to be a future where “we’ll have four newspapers that can make money and everything else will be gone.” O’Rielly claimed that this trend has made him “incredibly depressed.”

May asked Clyburn if she could provide any words of consolation and “please alleviate Commissioner O’Rielly’s depression.”