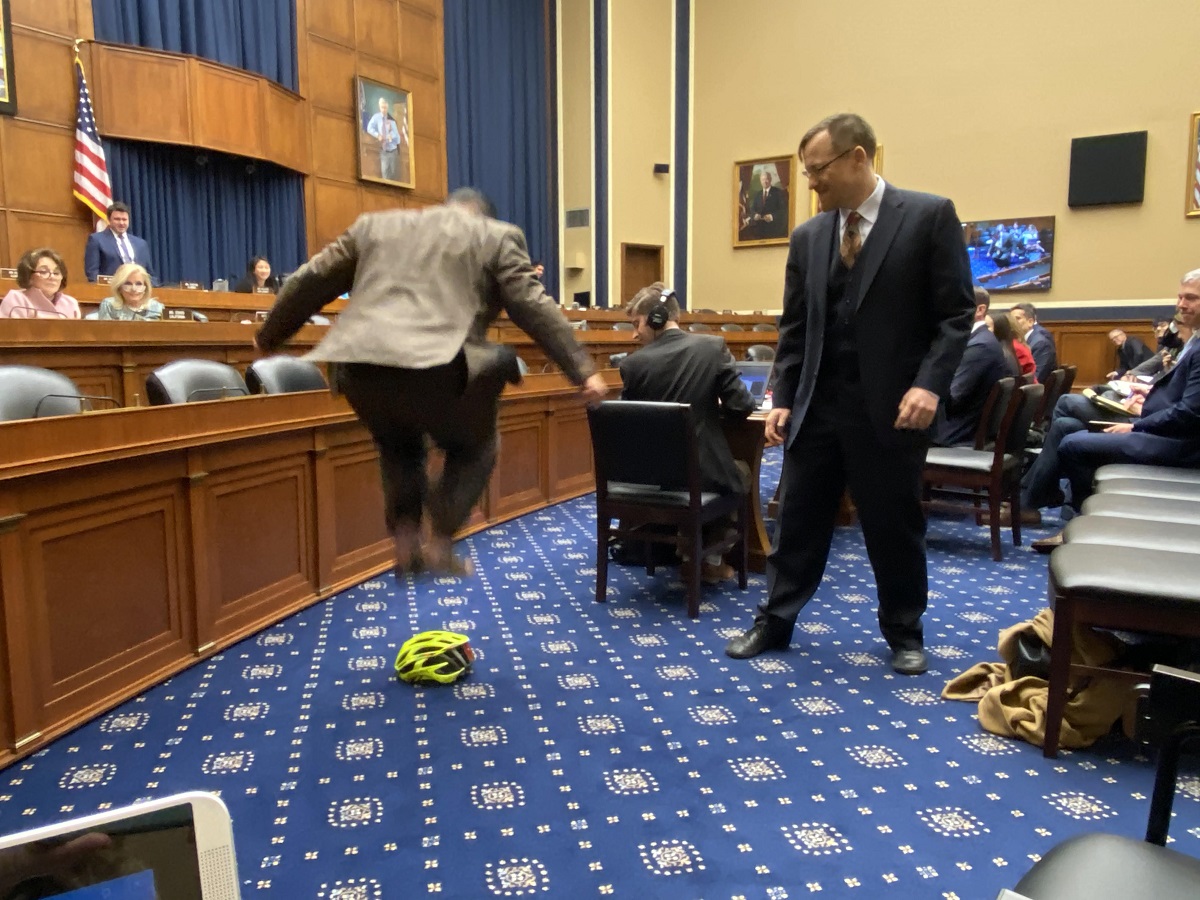 Photo of Rep. Ben Lujan jumping on a bicycle helmet during the "hearing" by Adrienne Patton

That was the witness testimony – and live demonstration by a congressman – from a Wednesday House Energy and Commerce subcommittee hearing on the impact of counterfeit items on third-party seller marketplaces.

Love offered to destroy a counterfeit helmet to demonstrate his point if the Congress members wanted. However, his offer was largely ignored for the majority of the hearing until Rep. Ben Lujan, D-New Mexico, joined the hearing towards the end.

Lujan shared an anecdote about his recent bike accident when he went over his handlebars into “a bed of rocks.” “Nonetheless, that bicycle helmet saved me,” said Lujan.

Love, who investigates fake bicycles and gear being sold online, invited Lujan to participate in a demonstration of the dangers of these counterfeit items.

Finally, Chairwoman Jan Schakowsky, D-Illinois, consented to the demonstration, with a loud chuckle.

Love set a poorly made helmet on the ground. Although of poor craftsmanship, that was otherwise undetectable based on the appearance. He invited Lujan to jump on it, replicating the force a biker might experience in a fall or accident.

In one swift jump in front of the witness table, Lujan crushed the helmet, while splintered pieces of helmet scattered across the carpet.

Lujan declared that if he had been wearing that counterfeit helmet, he would not have survived his incident.

“We need to invest in innovation at these companies and in Congress to block the counterfeits, the dangerous products, and the fake reviews,” urged Freidman.

“Bad actors try to prey on consumers,” especially in the wake of coronavirus fears, said Rep. Cathy McMorris Rodgers, R-Washington. She asked what the platforms are doing to address false products aimed to target those fearful of a coronavirus pandemic.

For example, the Amazon Transparency Program allows brands to apply “a unique transparency code on every product that uniquely identifies it,” so the same product doesn’t have the same ISBN code, said Mehta.

In a prehearing memorandum, Pallone wrote, “with commingling, customers purchasing a product directly from a retailer or a specific third-party seller may unknowingly receive the product from a different seller.”

Mehta admitted that with new products, if there is a product from a different seller closer to the customer, then they will receive the item closest to them, but commingling does not apply to used items for sale.

Global Trade Watch Director Lori Wallach explained the loophole that allows for so many counterfeit products to evade inspection.

The de minimis limit is $800, meaning goods that cost less than the limit can circumvent inspection when entering the United States.

Some sellers will pack products together and ship them to Mexico or Canada as goods “in transit,” and then someone packs the items individually so they can cross the border as di minimis and avoid inspection, said Wallach.

Editor’s Note: The story has been update with more color and details about Rep. Lujan’s big jump.