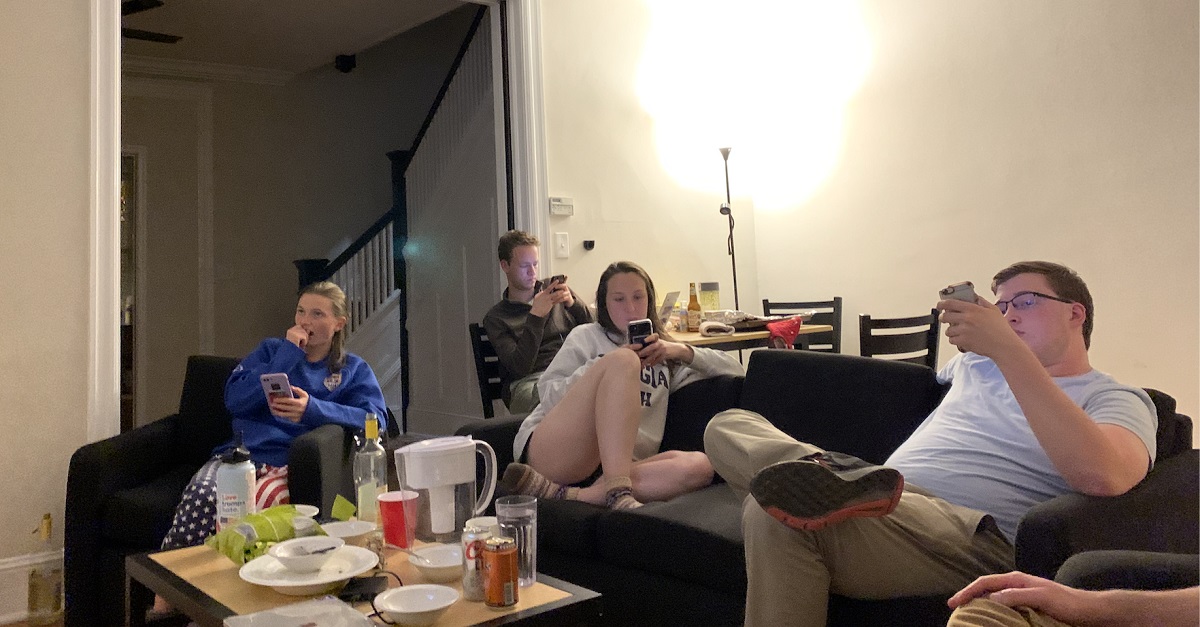 Photo of D.C. interns checking phones and streaming movies in a coronavirus self-quarantine by David Jelke

WASHINGTON, March 20, 2020 – American and global society is right now living through the herculean task of moving fundamental aspects of society and commerce online — health, education, labor, and entertainment— at the very moment that people are retreating into a turtle shell of isolation.

Are we are all unwitting subjects in a grand social experiment that has never been run before?

Indeed, one question that rings with ferocious urgency throughout America, urban and rural: Can the United States’ internet infrastructure handle the data usage during quarantine? Or will it collapse under the weight?

A BroadbandNow report relays a broad scope of how the country at large is consuming broadband. For six of the 10 largest American cities, broadband levels have not significantly changed. The remaining four—Houston, San Diego, San Jose and New York— have reported dips in broadband speed. Confusingly, the first epicenter of the coronavirus COVID-19, Seattle, has seen an increase in broadband speeds.

A press release from Verizon mentions that video gaming has increased 75 percent — the most relative to other technologies that consume bandwidth. Curiously, Verizon found that there has been no increase in the use of social media. Technologies that have experienced minor gains include video, web traffic, and VPN.

Residential internet use has use nearly doubled, according to a report on NextTV by Daniel Frankel. Sonic Fiber CEO Dane Jasper tweeted data from his California-based ISP showing that peak usage data has increased by 25 percent.

In an interview with Broadband Breakfast, Jasper said some technologies are more exposed to congestion than others.

He said this was true for cable broadband, because it is both asymmetric and shared. In other words, bandwidth varies widely throughout the day – and upload speeds may barely be enough to send an email during peak usage hours.

In another unusual recent development, YouTube usage now dwarfs that of Netflix by nearly double according to a blog post on Sandvine, a network intelligence company.

Armed with these early indices of data, let’s return to the central question: Does the country have the necessary bandwidth to support Americans’ new identity as cosmonauts in cyberspace?

For example, US Telecom CEO Jonathan Spalter expressed confidence in a letter to Congress that member ISPs will be able to handle quarantine-induced bandwidth stress: “Currently more than 60 percent of network throughput is via video and content streaming. While these data flows continue to increase year-over-year, at peak hours our networks have sufficient capacity to provide customers with necessary bandwidth.”

Spalter touted the use of “internet protocol, virtualization, data centers, caching, cloud and other software-based innovations” to juggle the demand for broadband.

In an effort to free up broadband and ensure Americans’ connectivity, many ISPs have voluntarily announced no data caps and opened up their public Wi-Fi networks to non-customers, such as Comcast Xfinity.

Issued one week ago, the pledge also urged ISPs not to disconnect non-paying customers and not to charge late fees during the first 60 days of the coronavirus pandemic. Some said that the pledge does not go far enough and urged the lifting of data caps.

The web meeting service Zoom, which has seen significant increases in its use for the purposes of telework, telehealth, and tele-education, also expressed confidence in meeting the broadband demand.

According to an USA Today, Zoom said its service “was built to withstand double its daily average of users, so it should be able to serve users without interruptions.”

However, there are also some foreboding omens.

An article by the New York Times points out the problems posed by the digital divide. ”Roughly 20 percent of students have trouble with basic technology needs. Their data plans are capped, their computers break, or their connections fail; One-third of all undergraduates are enrolled in online classes now. Thirteen percent are learning exclusively online,” the article read.

Streaming has also become a hot button issue and potential data vampire. Commissioner of the European Union Thierry Breton on Wednesday implored Netflix to block its HD feature to help unclog internet infrastructure and provide more space for essential functions like work and health, according to Deadline.

Netflix responded by saying that it would strike that feature from European accounts for the time being.

“We estimate that this will reduce Netflix traffic on European networks by around 25 percent while also ensuring a good quality service for our members,” a Netflix spokesperson said. There has been no apparent move to do this in the U.S.

Some experts in telecom are hopeful, other remain skeptical. Will the internet be able to handle our new thirst for bandwidth? Tune in into tomorrow’s Broadband Breakfast Live with Dane Jasper to find out.