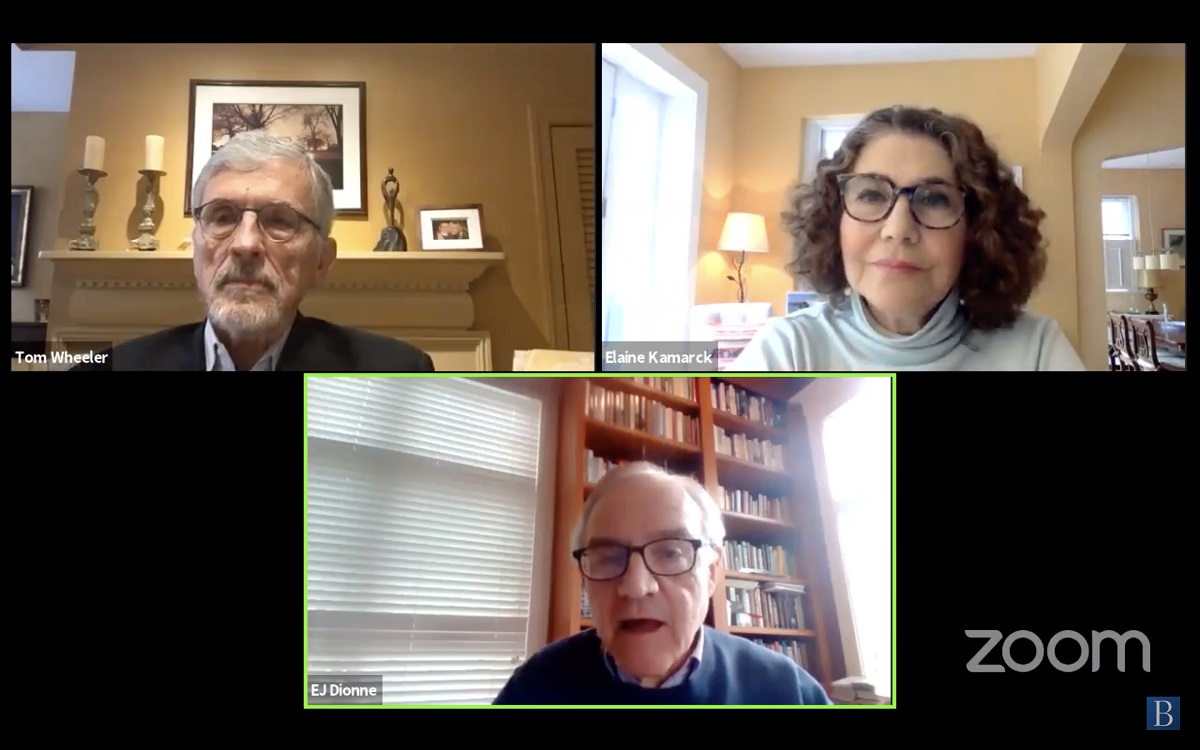 April 14, 2020— “Compared to other crises, it is more straightforward to solve,” said Elaine Kamarck, Brookings senior fellow of governance studies, of the issue of voting due to the coronavirus outbreak.

She spoke at a webinar on Tuesday hosted by the Brookings Institute titled “Protecting elections during the coronavirus pandemic”.

According to Kamarck, 38 percent voted remotely or by absentee ballot in 2016.

“We already have a lot of experience with voting remotely,” Kamarck said. Officials, specifically government officials, need to “just do it,” referring to enacting the six points she had called on to make remote voting as robust as possible going into November. The six points are as follows:

Kamarck said that it would cost around $2 billion to carry out the necessary provisions.

“In the scheme of things, this is not an enormous amount of money,” Kamarck said, pointing out that we just passed a $2 trillion stimulus package through the CARES Act. These funds would be integral to setting the structure in place to use widespread absentee ballots.

Kamarck added “it’s going to take a long time for these votes to get counted” and that “we may not know who is going to know by 11 p.m. election night.”

“A national emergency has never stopped a vote and it shouldn’t now either,” said former Federal Communications Commission Chairman Tom Wheeler, a visiting fellow at Brookings who is dubbed a “resident historian” at the institution.

For example, during the first mass mail-in ballots happening during the Civil War, officials went so far as to send messengers into the encampments of Union soldiers to collect votes.

In addition, President Lincoln sent a navy ship down the Mississippi River to collect votes from military boats who weren’t permitted to dock. The Spanish Flu pandemic of 1917 also happened during a quarantine, and the Election of 1918 went off without a hitch, noted Wheeler.

When asked about whether president Trump wields the authority to cancel or postpone the election, Kamarck and Wheeler gave more passionate responses.

“The answer is no,” Kamarck asserted. The Constitution asserts that “Congress sets the date” of the election and would be surprised if the president attempted to do such a thing. 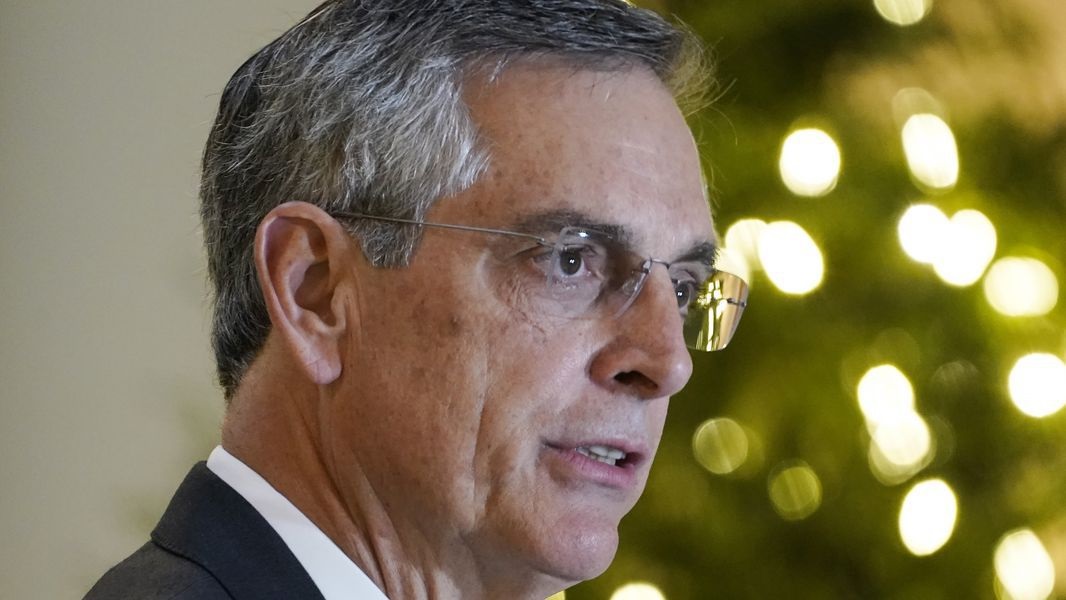 Photo of Brad Raffensperger from the Atlanta Journal-Constitution

February 5, 2021 – With election misinformation and conspiracy theories rampant in Election 2020, secretaries of state representing pivotal states swapped stories on Thursday about the howlers they faced – and what they did to try to maintain public trust in upholding election integrity.

Perhaps no one faced more pressure to act to overturn the results of his state’s presidential vote tally than Georgia Secretary of State Brad Raffensperger.

Among the many false accusations he faced was that a Ron Raffensperger, allegedly a brother of his, works for a Chinese technology firm. While there is such a person, and that person does in fact work for the Chinese telecom equipment giant Huawei, that Ron Raffensperger is not Brad Raffensperger’s brother.

At Thursday’s meeting of the National Association of Secretaries of State, Raffensperger said again that he does not have a brother named Ron. He also expressed condolences for the real Ron Raffensperger out there.

Stamping out falsehoods is like playing a game of ‘rumor-whack-a-mole,’ said Brad Raffensperger. Once you eradicate one rumor, another just pops up. It’s as if the truth has 30,000 Twitter followers while falsehood has 80 million followers, he added.

Screenshot of the NASS webinar

Arizona Secretary of State Katie Hobbs addressed the “Sharpiegate” scandal, another fake claim concocted by Republicans. Sharpiegate was the wrong notion pushed by some that Sharpie pens distributed at polling places were handed out for voting.

But the felt-tip pen’s ink bled through the ballot, making it unreadable by a machine and thus keeping the Sharpie victim’s vote from being counted. The twist in this particular story is that only the Sharpie-marked ballots cast by Republican candidates were thrown out, somehow.

While recognizing the seriousness of this misinformation campaign, exacerbated by Eric Trump’s tweets about it, souvenir Sharpies were ordered bearing “Sharpiegate 2020” printed on them – just as a joke, said Hobbs.

Michigan had a plan in place for months on how to collect, process, and release voting results, said Secretary of State Jocelyn Benson. However, because its processes were so efficient, Michigan caught its critics off guard. This exposed Michigan to accusations of allegedly counting its ballots too fast in an effort to try to “fix” the election. Robocalls targeted minority majority communities, including in Detroit.

Ohio also anticipated a barrage of misinformation. As a preemptive measure, the state rolled out numerous tools and resources to inform citizens of voting processes.

Secretaries of state need to help voters build confidence knowing their voice will be heard in a fair and honest contest, and not to tear it down, said Frank LaRose, Ohio Secretary of State. He praised Ohio’s election integrity and said it had a record low in ballot rejection, and a record high in ballot workers.

The state also tried to stop spreaders of misinformation by warning of felony charges for spreading lies.

At New America Foundation Event on India, Panelists Talk of ‘Digital Colonization’ by U.S. and China 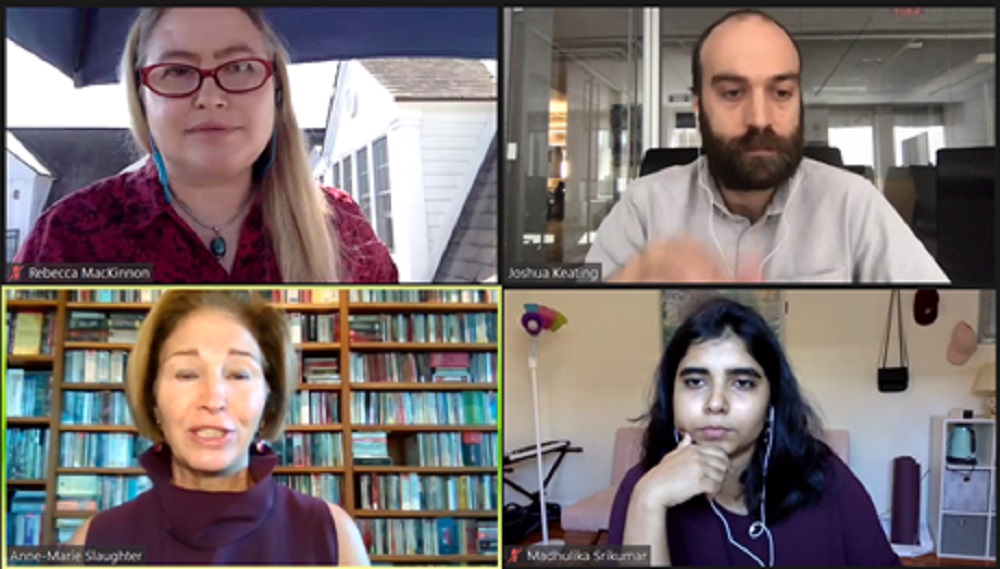 October 1, 2020 – When it comes to social media, India is currently in a “two-house race” between the United States and China, explained India expert Madhulika Srikumar at New America on Wednesday.

Tiktok and Facebook have been big players in this race, each attracted to India’s large audience base.

Srikumar, an attorney formerly with the Cyber Initiative at Observer Research Foundation in New Delhi, cited two statistics. First, one-third of TikTok’s users were Indian, before the app was banned in June by the Indian government. Second, if India’s Facebook audience were a country, it would be the fourth largest in the world.

She explained the recent trend of Chinese and U.S. companies each investing in Indian companies.

New American CEO Anne-Marie Slaughter said in response, “When I hear you Madhu, all I can think of is digital colonization.”

“Our institutions for holding power accountable are still from the analog age,” Said Rebecca MacKinnon, founding director of New America’s Ranking Digital Rights project, adding that there’s nothing in our law that could prevent Tiktok from becoming a vehicle for hate speech.

Slaughter blamed the platforms, claiming that platforms were publishers wielding great political power who were responsible for polarization and declining trust.

She pointed to a future Biden-Harris administration, and projected that if elected, it would provide a new vision for internet policy by working with a number of other countries, including Europe, to adopt global standards for a free internet. This consortium would insist that companies abide by such rules.

When asked whether the UN could play a role, Slaughter said that it could, but it would need to have strong member support since “the current U.S. government has distain for non-US institutions.” The United Nations would have difficulty putting regulations in place with one of it’s biggest members not being supportive.

MacKinnon agreed that UN involvement would be complicated. For the past decade, there’s been a fight brewing over who sets standards for the tech community and for global technologies.

Srikumar, in turn, appealed for greater resources to flesh out what exactly an open internet means, as well as a move to divorce content from gatekeepers.

See also “The Privacy Negotiators: The Need for U.S. Tech Companies to Mediate Agreements on Government Access to Data in India,” by Madhulika Srikumar on New America

Mobile Technology Aided the Growth of Black Lives Matter, But Will Hashtag Outrage Lead to Change? 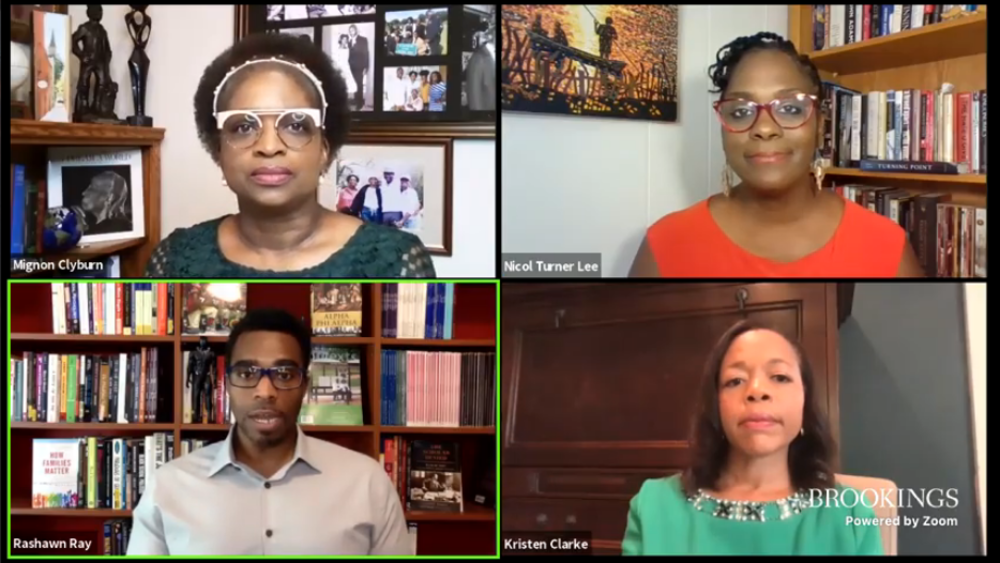 Screenshot of panelists on the Brookings Institution webinar

September 21, 2020 — In the United States, widespread public use of mobile phone cameras and social media has thrust the longstanding issue of police brutality against Black Americans into the national spotlight like never before.

Delving deeply into the subject of how digital tools have contributed to the goals of anti-brutality activists, panelists at a Brookings Institution event on September 14 detailed the rise of the Black Lives Matter movement and whether the explosive growth of the hashtag #BLM might result in any institutional change.

In the summer of 2014, videos, images, and text narratives of violent encounters between police officers and unarmed Black people circulated widely through news and social media, spurring public outrage.

“A large digital archive of Tweets started in 2014, when Michael Brown was killed,” said Rashawn Ray, professor of sociology and executive director of the Lab for Applied Social Science Research at the University of Maryland.

The panelists referenced the “Beyond the Hashtag” report authored by Meredith Clark, assistant professor at the University of Virginia, analyzes the movement’s rise on Twitter.

“Mobile technology became an agent of change,” said Mignon Clyburn, former commissioner at the Federal Communications Commission, referring to the 2007 introduction of the iPhone as a turning point in the way individuals utilize devices. “Devices became smaller, less expensive, and more ubiquitous,” said Clyburn, “we are now seeing a global, mobile revolution.”

“Black Americans have the opportunity to share distinctively what is happening to us,” said Nicol Turner Lee, senior fellow in governance studies and the director of the Center for Technology Innovation at the Brookings Institute.

“These videos show our humanity, and how it is destroyed and undermined,” added Kristen Clarke, president and executive director of the National Lawyers’ Committee for Civil Rights Under Law.

While videos taken to report instances of police brutality are critical resources, they come with significant consequences for those filming and viewing them.

In order to record an instance of police, an individual has to be courageous, as many citizen journalists attempting to capture an act of police brutality, end up a subject of cruelty.

“You have the right to record protected under First Amendment,” Clarke informed, urging that officers be trained on respecting citizens First Amendment rights to film.

While recording instances of police brutality is distressing in itself, sharing the video online, although necessary, amplifies the video’s power to traumatize indefinitely. “There will no doubt be a generation of children that will be traumatized,” by repeatedly seeing images of Black Americans brutalized by the police, said Lee.

While digital tools have enabled video evidence of brutality to be caught, amass widespread attention, and cause public outrage, as of yet, it has not translated into real-life justice for Black individuals. Difficulty to bring prosecution against excessively violent officers remains.

Clarke noted that police union contracts are barriers to reform. “The terms of collective bargaining agreements allow officers to see video evidence before reporting on how the events transpired,” detailed Clarke.

Ray called for the passage of the George Floyd Justice in Policing Act, H.R. 7120, introduced by Rep. Karen Bass, D-California, which he said was currently ‘collecting dust’ in the Senate.

The bill would establish new requirements for law enforcement officers and agencies, necessitating them to report data on use-of-force incidents, obtain training on implicit bias and racial profiling, and wear body cameras.