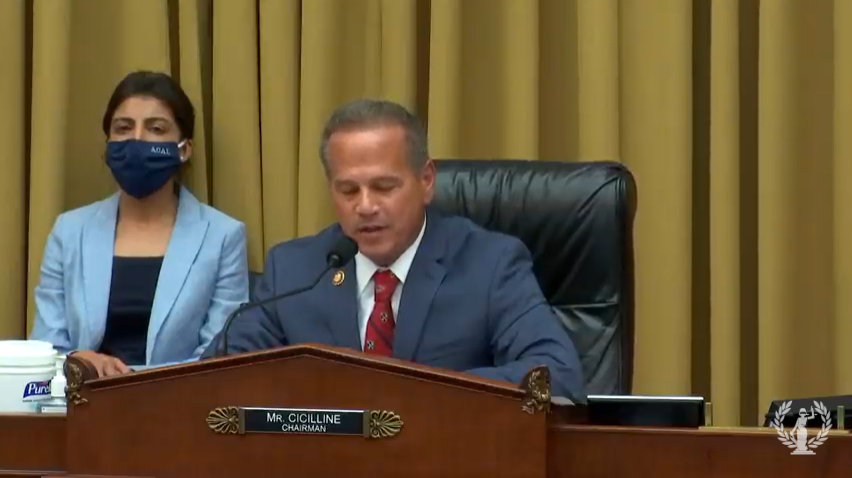 Screenshot of Rep. David Cicilline from the webcast

Apple’s Tim Cook, Facebook’s Mark Zuckerberg and Google’s Sundar Pichai also dialed in through video conference, while most of the committee members were present in Congress, for the sixth hearing in the subcommittee’s year-long investigation into the tech companies’ business practices.

The CEOs largely contended that size and conglomeration benefits end-users, by making technology easier to deploy.

But the majority of members on the subcommittee said that these corporations stifle choice and oppress the next generation of entrepreneurs. They claimed that big tech companies hold dangerous power and stifle competition. They criticized the heads of each of the four companies, calling them “gatekeepers of the digital economy.”

Accusations against the ‘big four’ add up

Each of the four CEOs were accused of stealing ideas, buying up their competitors and utilizing consumer data to expand at a near exponential rate.

Yet the CEOs mustered their way through the nearly six-hour long questioning session, mostly managing to not admit to the ways in which their business practices might stifle competition.

The CEOs avoided giving direct answers to the Representatives’ questions, often saying that they were unaware of the situations being referenced or claiming that their words were being taken out of context.

The companies’ heads continued to refute the idea that they lead monopolies, arguing that they have competition both outside of the tech sector and globally.

Below are snapshots of the interactions involving each of the four big tech companies.

Amazon, which dominates 70 percent of the online market space, was accused of stifling third-party sellers by Rep. Lucy McBath, D-Ga.

According to McBath, third-party sellers often use the words “bullying, fear and panic” to describe their relationships with Amazon.

McBath cited one third-party seller who said, “we’re stuck and we don’t have a choice,” claiming that selling on Amazon, while unfortunate, was their only viable option.

Screenshot of Rep. Lucy McBath from the webcast

In response, members of Congress demanded Amazon be more transparent with their use of third-party data.

Rep. Jamie Raskin, D-Md., criticized Amazon for undercutting the prices of their smart home products in order to sell more than the competitors listed on their site.

The company was further criticized for promoting the sale of its own products during the pandemic, after vowing it would only sell essential products.

Rep. Pramila Jayapal, D-Wash., read a testament from Instagram’s founder, saying he felt pressured to sell the company to Zuckerberg.

Zuckeberg argued back that, at the time of the acquisition, it was “not obvious that Instagram would have reached the scale” it has achieved today.

Rep. Jerrold Nadler, D-N.Y., cited evidence that Facebook saw Instagram as a threat and bought it to avoid competition.

In retrospect, members of Congress called the 2012 merger approval a failure on the part of the Federal Trade Commission.

Rep. Val Demings, D-Fla., criticized the platform for restricting the access of its competitors to Facebook, citing a case in which Facebook restricted Pinterest’s use of the site in 2012.

Screenshot of Rep. Val Demings from the webcast

Members referenced when Facebook stole Snapchat’s “stories” feature, rendering the competitor nearly obsolete, after Snapchat refused to be bought out by the company.

Yet Zuckerberg reacted with surprise when Congressmembers referred to Facebook as a monopoly, saying, “Monopoly? We face a lot of competitors in everything we do.”

Neguse pushed back, citing evidence that Facebook accounted for 95 percent of all social media use in the U.S., as early as 2012.

Google’s efforts to privilege its own products

Google, the search engine which captures 90 percent of online searches, was ridiculed by Congressmembers for being a walled garden, stealing content and privileging its own sites.

Members of Congress referenced two incidents of Google stealing from competitors: restaurant reviews from Yelp and music lyrics from Genius.

When Yelp spoke out against the incident, Google responded by threatening to delist Yelp from its website entirely.

Pichai responded, maintaining that Google does not steal content.

Demings questioned Pichai on his 2016 decision to combine data sets that Google promised Congress it would keep separate, insinuating that Pichai no longer cared about the legal binding after gaining “exponential” power.

When questioned by members about Google’s ad revenue, Pichai revealed, in a near whisper, that it accounts for around $100 billion of the company’s overall returns.

Apple’s gatekeeper role as guardian of the App Store

Apple, which profits from over 100 million iPhone users in the U.S. alone, was accused by Representatives of picking and choosing what apps are marketed to users.

What Cook referred to as a “seamless integration of software and hardware,” others saw as Apple having the power to exclude apps that compete with the company.

Apple is sole decision maker in the rules governing the app store.

One member noted that Apple made screen time apps obsolete by automatically installing iPhones with a similar function in iOS 13.

In response, Cook maintained that, “the app store is accessible” and that “Apple does not have a dominant share in any sector in which they do business.”

See additional story on the hearing. 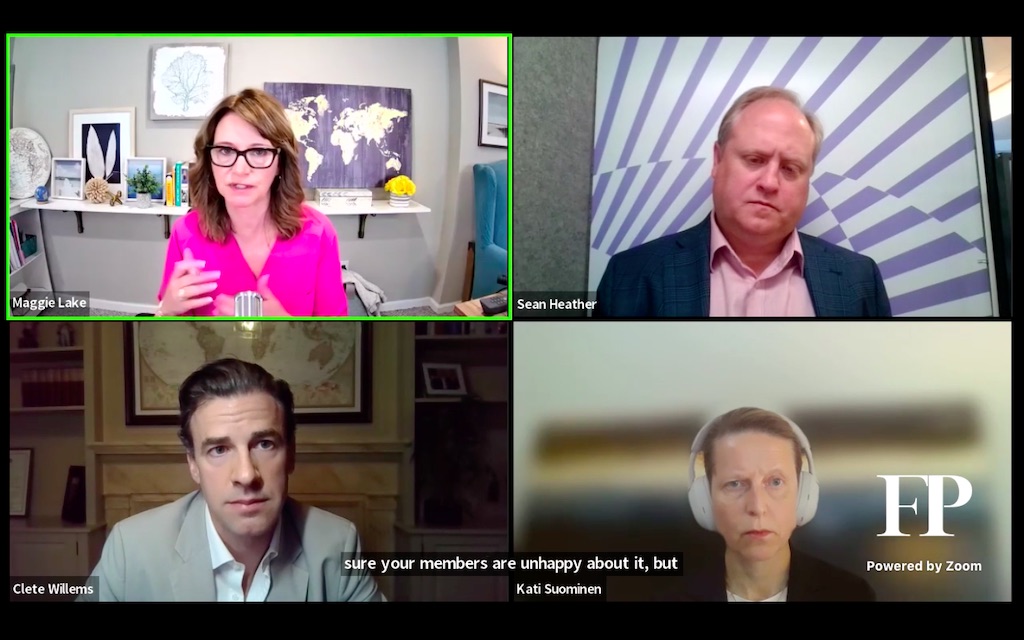