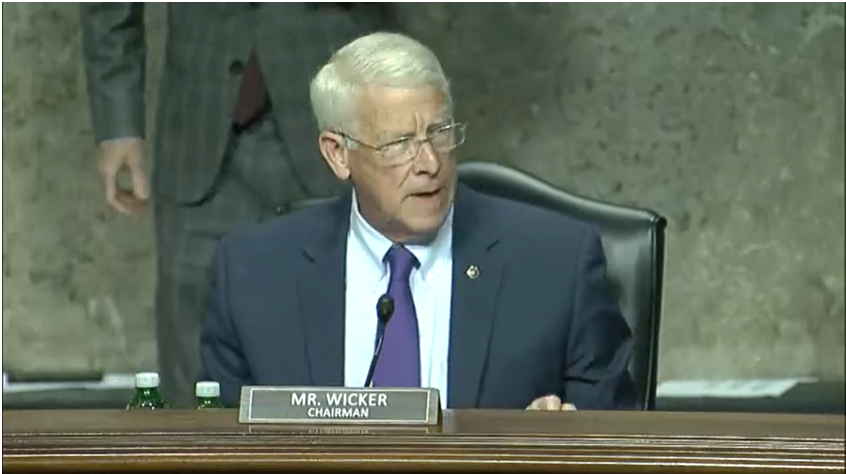 Screenshot of Sen. Roger Wicker from the webcast

July 22, 2020 — In an executive session held Wednesday, the U.S. Senate Committee on Commerce, Science, and Transportation voted to nominate Federal Communications Commissioner Michael O’Rielly for another term at the agency.

“The COVID-19 pandemic has Americans relying more on broadband than ever, [and] technologies like telehealth and remote learning are advancing rapidly,” Wicker said. “I appreciate O’Rielly’s commitment to speedy services and ensuring we are targeting the areas that need it most.”

Screenshot of Ranking Member Maria Cantwell from the webcast

The act would require the FCC to map areas in the United States that have internet service gaps, as well as high rates of poor maternal health outcomes.

Rosen said there has been a dramatic increase in maternal mortality rates across the country.

Similar advances in telehealth have significantly helped patients with diabetes, Rosen pointed out.

“There is no reason we shouldn’t expect to expand telehealth and medicine into this life saving arena,” Wicker said.

The committee also voted in favor of the Advancing Artificial Intelligence Research Act, introduced by Cantwell.

This bill would establish a national program to advance and streamline AI research at the National Institute of Standards and Technology.

“Given the great potential AI holds to benefit our society, it is critical that Congress support research to address the most pressing issues that lie ahead,” Wicker said.