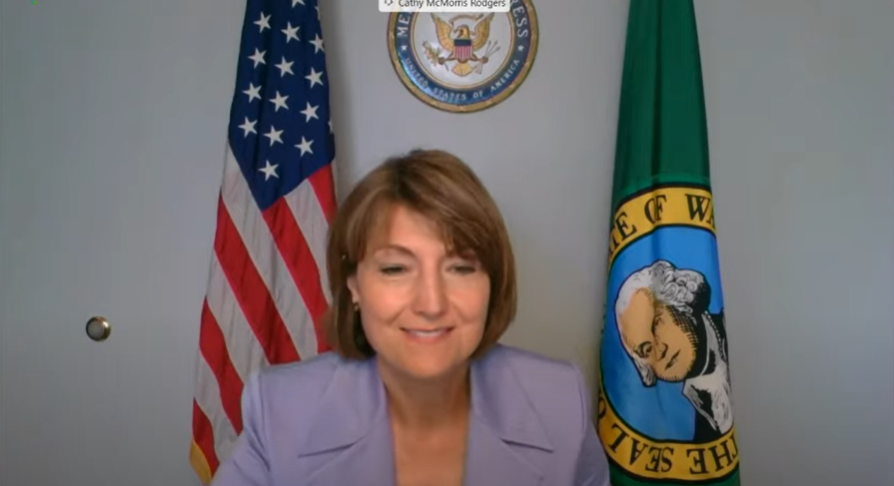 Screenshot of Rep. Cathy McMorris Rodgers from the webcast

July 10, 2020 — The coronavirus pandemic has created an environment that is highly vulnerable to nefarious actors, said Rep. Richard Hudson, R-N.C., in a House Energy and Commerce hearing with members of the Subcommittee on Consumer Protection and Commerce on Thursday.

A rise in disinformation, brought about by increased internet usage due to remote working and schooling conditions, is driving fear and conspiracy theories among many.

Scammers are exploiting Americans in a slew of ways. Fake news, price gouging, counterfeit products in the market and robocalls are just a small slice of what is happening across the country.

The general distress felt by consumers impacts them in a number of ways, including impairing their ability to make rational and informed purchasing decisions, speakers said.

In an attempt to protect consumers in a time of need, Chairman Frank Pallone, D-N.J., announced that he recently sent a letter to Facebook, YouTube and Twitter requesting monthly updates on what the companies are doing to counter the spread of COVID-19 misinformation.

Representatives further called for the federal government to step up on the matter of consumer protections.

“The government continues to prioritize corporations over consumers,” she declared.

Schakowsky noted that she initiated the Price Gouging Prevention Act, part of the Health and Economic Recovery Omnibus Emergency Solutions Act, which would make it unlawful for any person to sell a consumer a good or service during a public health emergency for a price that is unconscionably excessive.

Sen. Mitch McConnell, R-Ky., has yet to take up the HEROES Act, Schakowsky pointed out.

Rep. Cathy McMorris Rodgers, R-Wash., argued that as more people turn to relying on online services, the need for a national privacy framework has only grown.

“Data privacy is the most fundamental thing to protect, a strong national privacy standard is urgent,” said Rogers, who personally drafted a plan for a federal standard.

Members of the subcommittee agreed that there was much work to be done.