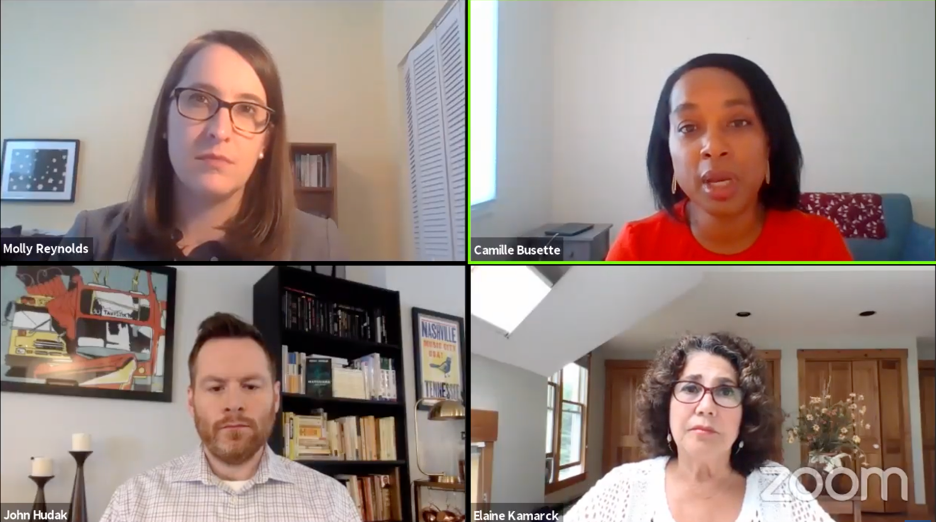 July 15, 2020 — The November election will be extremely vulnerable to widespread voter suppression, making it increasingly important for states to have robust plans for both absentee and in-person voting, said Brookings Institution panelists Wednesday.

On what was formerly scheduled to be the third day of the Democratic National Convention in Milwaukee, Brookings fellows discussed political challenges brought on by the COVID-19 pandemic, not only for candidates navigating a struggling economy and ongoing social unrest, but for individuals facing substantial barriers to voting.

In spite of repeated claims from President Donald Trump that mail-in voting is dangerously fraudulent, the practice is not new. Only 62 percent of ballots in the 2018 elections were cast in person, pointed out Elaine Kamarck, founding director of the Brookings Institution Center for Effective Public Management.

However, the scale at which remote voting may be required in November could prove disastrous for states without the necessary infrastructure, she said.

“If we ever do get another stimulus bill, which we may, hopefully there will be some more money in there for states,” Kamarck said. “And it’s got to happen pretty soon, because we’re looking at November and states really need to ramp up their game in order to be able to count quickly.”

Ease of voting varies from state to state

Kamarck recently worked on the development of a scorecard evaluating the difficulty of remote voting on a state-by-state basis. The scores depend on metrics such as the ease of requesting, completing and submitting mail-in ballots.

The research left her with two main conclusions, Kamarck said.

“One is that states do need to make [absentee voting] easy to do, and they need to educate voters on how to do so,” she explained. “But the second, and this we’ve learned from the primaries, is that states still need to provide in person voting.”

Having physical polling locations is especially important in states that have historically not had high rates of absentee voting, Kamarck added.

Some of the scorecard’s results were unexpected, said John Hudak, deputy director of the Center for Effective Public Management. For example, Connecticut scored significantly lower than surrounding states.

“Not only does voter suppression happen at the state level, but it can really happen at the local level,” he said. “Some people have the idea that, ‘We have a governor who’s in favor of voting rights,’ … but given the state and local nature of voting and vote counting, that is not a real protection against suppression.”

Panelists agreed that a significant amount of preparation must take place to ensure that voting goes more smoothly in November than it did during primary elections in states like Georgia.

“There were some fairly disastrous experiences…where people were waiting four to five hours to cast their ballots,” said Camille Busette, director of Brookings’ Race, Prosperity, and Inclusion Initiative. “Even though this might not be the case, it certainly appears to be one of the ways in which you can suppress the vote among communities of color.”

“This can really become a vehicle for voter suppression…if something serious isn’t addressed with it, it’s certainly going to play out in real time during the November election,” Hudak agreed.

Busette pointed to research showing that even simply moving a polling place can suppress voter turnout by about two percent.

“Adding that up, that can be fairly serious,” she said.

The process of counting absentee ballots is another area vulnerable to voter suppression, especially if states are unable to obtain the scanners and other equipment necessary to count an unprecedented number of mailed ballots, Busette said.

States are now faced with the challenge of both accommodating a dramatic increase in absentee ballot requests and also recruiting enough poll workers to keep polling places open, Kamarck said.

“The problem with that, of course, is that traditionally poll workers are retired people, are people aged 65 and over,” she explained. “They are the very age group that does not want to be sitting there in a closed place facing the public for eight to ten hours a day.”

In addition to new challenges brought on by the pandemic, the country has yet to fully grapple with election security issues that arose in 2016, said Molly Reynolds, a senior governance studies fellow at Brookings.