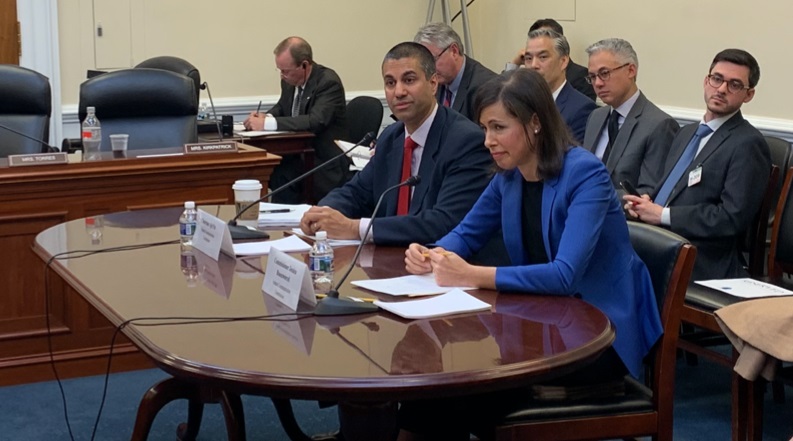 In his opening statement, Chairman Mike Doyle, D-Pennsylvania, argued the FCC, as the government agency tasked with regulating interstate communications, hasn/t been doing what it could to meet the public’s communication needs resulting from the ongoing coronavirus pandemic.

Referencing Pai’s Keep American’s Connected Pledge, Doyle contended, “We cannot depend, as a nation, on the generosity of private companies to get us through this crisis. We need a national plan and coordinated federal resources.”

“Instead we have a government asleep at the wheel as our nation and our people struggle and too many are left behind,” he continued.

Chairman Frank Pallone, D-N.J., argued that the country is in this position it is because of misplaced priorities.

He said the Trump FCC “focused on advancing corporate interest” and that it “does not seem to care about consumers.”

Pallone argued that this FCC’s 2017 decision to obliterate net neutrality has resulted in the “near complete deregulation of media ownership rules,” allowing for big stations to consolidate, eating up small stations.

Pai maintained that under his leadership access to fixed broadband, offering speeds of 25 Megabits per second (Mbps) down / 3 Mbps up, is available to more Americans than ever before.

Pai reminded his critics that the Rural Digital Opportunity Fund auction is set to launch in October, and that it will initiate network buildouts to eventually offer broadband access to an additional 10.4 million Americans.

One important critique of the agency raised by Democrats during the hearing was the FCC’s lack of action on broadband availability maps.

Pai blamed Congress for lack of action on broadband mapping “On August 1, [2019], we voted to begin broadband maps,” recalled Pai, but the House Appropriators Committee “cut the off only funding source we had.” Pai said the agency has been “repeatedly requesting funding” since.

Commissioner Jessica Rosenworcel said she believes the lack of available data detailing where broadband is and where it is not is increasingly an issue, especially as the agency is set to give out $16 billion dollars through the RDOF process.

According to Rosenworcel, the Commissioners are set to distribute “80 percent of the FCC’s funding over 10 years,” based on inaccurate maps. She urged the agency to treat broadband mapping with same speed and efficiency that it did telehealth.

“We all recognize it’s a problem that needs to be fixed,” seconded Commissioner Mike O’Rielly.

Yet, no maps have been produced. “Where are the maps,” questioned Representative Dave Loebsack, D-Iowa, “Why hasn’t the FCC been able to do this?” He argued that where there is a will, there is a way.

Yet, Pai’s fellow commissioners – Democrats – said the agency could do more.

Commissioner Geoffrey Starks argued that the average American’s monthly internet cost should be “something in the low teens” to be considered affordable to all. Starks further argued that the FCC’s current definition of broadband, 25/3 Mbps, “is not enough.”

In an attempt to vouch for the Commissioner’s decision to repeal net neutrality, Greg Walden, R-Ore., argued the FCC’s “light-touch regulatory approach has allowed broadband providers to build out networks sooner.”

Yet, other Democratic legislators criticized the FCC for the decision, saying the agency wasted time on net neutrality, when it could have been focused on broadband.