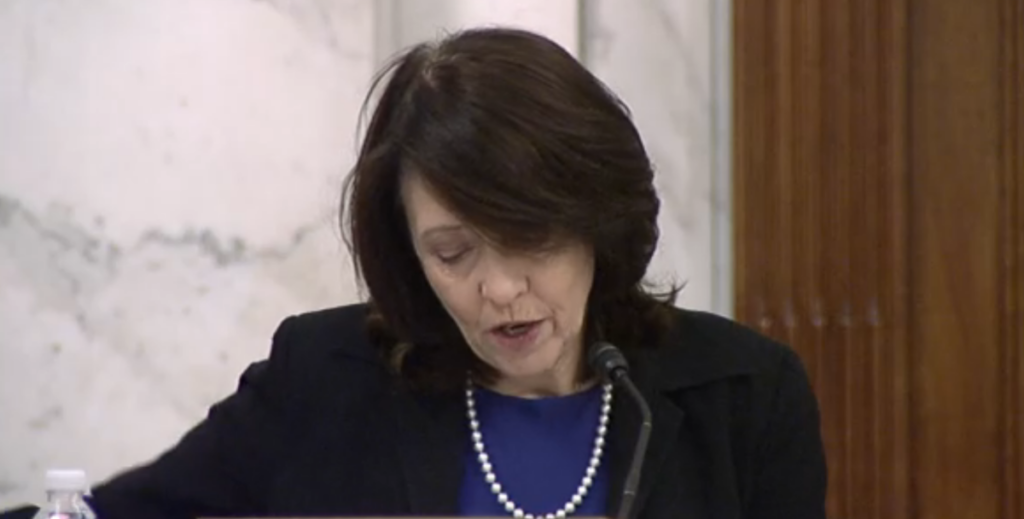 Screenshot of U.S. Sen. Maria Cantwell, ranking member of the Senate Commerce Committee at the markup

The Senate Commerce Committee on Wednesday advanced the E-SIGN Modernization Act of 2020 and the Government Spectrum Valuation Act of 2019 during an executive markup session.

Both bills were moved on by thin margins, receiving much disapproval from Democratic committee members.

Sen. Maria Cantwell, ranking member of the committee, said she opposed the bill and withdrew an amendment during the markup that would require the U.S. Commerce Department to conduct another study about consumers’ access to electronic records. She maintained that it is crucial to take into account how consumers lacking internet access, digital tools, or digital know-how would be affected.

The Committee also moved along the Government Spectrum Valuation Act of 2019, sponsored by Sen. Mike Lee, R-Utah. The bill would require government agencies to place a value on government-held spectrum, in order to gauge how much it would go for in potential public auctions. The bill is meant to encourage federal agencies to make unused spectrum available to the private sector.

The Spectrum Act was met with objection from many committee Democrats, who said the measure could produce extreme results.  Cantwell cautioned that it might push agencies to reach hasty conclusions about how to maximize their holdings.

“The Government Spectrum Valuation Act has one goal,” she said, “to put pressure on federal agencies, such as DOT, NOAA, NASA and DOD, to give up spectrum.”

“It is designed to create a wildly inaccurate valuation of spectrum use. I hope that we don’t ignore how essential federal spectrum is, but work together to resolve these issues between agencies.”

The Federal Communications Commission’s Wireline Competition Bureau announced on Wednesday that the agency is opening a second filing window for the 2020 funding year, to allow schools to request additional E-Rate funding.

As schools across the United States continue to face unprecedented challenges due to the COVID-19 pandemic, many have reported an urgent need for additional bandwidth on-campus.

During the second filing window, schools will be able to purchase additional bandwidth for this academic year to address needs resulting from the shift to streaming classroom instruction, which has significantly increased on-campus bandwidth requirements.

Earlier this year, the FCC announced extensions of E-Rate services and filing deadlines to provide relief to regions affected by the COVID-19 pandemic. The move to open a second application window comes after countless individuals criticized the agency for not doing enough to initially expand the E-Rate program, to meet public needs during the pandemic.

The company claims that its unique point-to-multipoint design enables them to provide gigabit-capable coverage to communities at a cost of less than $10 per home passed.