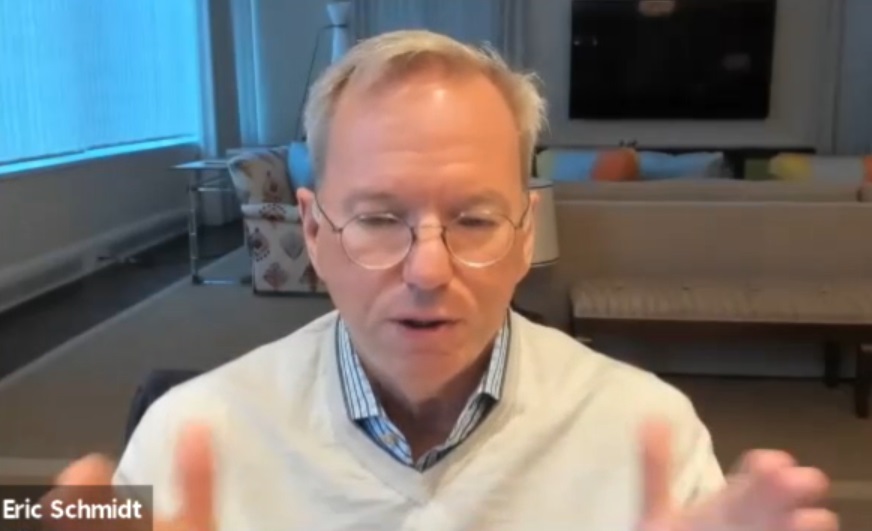 Screenshot of Eric Schmidt from the webinar

September 17, 2020 – The best way for the U.S. to catch up with China in the 5G race is to enable spectrum sharing in the crucial mid-band spectrum, said Eric Schmidt, former CEO and former executive chairman of Google.

Moreover, the 5G contest contrasts with previous wireless generations, where the U.S. led. China is already the leader in domestic consumption for 5G devices. It is anticipating 120 million 5G users by the end of 2020, he said.

Schmidt, who is currently chair of the Defense Department’s Defense Innovation Advisory Board, said that the pentagon cares about 5G because of national autonomy and national interest.

“You really can’t build the kind of anticipated defense systems that allow for autonomy plus essentially peer level communications and control without advances in 5G. At the moment, all of those advances are occurring in China. Not good.”

China’s 5G strategy was to take 200 megahertz within the crucial mid-band spectrum of between 3 and 6 GigaHertz (GHz). At the moment, these frequencies are seen as the most desirable block of spectrum.

But China doled out this precious beachfront property to three telecom companies without any requirements that they build out their networks.

The biggest thing preventing the U.S. from doing the same is that the United States has key military technologies and naval radar systems that are occupying those spaces.

Schmidt estimated it would take 10 years to clear the space or redesign the systems. That’s why he proposed using the existing dynamic spectrum and “some sort of wholesale model to build out the network quickly.”

The White House, the Federal Communications Commission, and the Commerce Department’s National Telecommunications and Information Administration, which controls federal frequencies (including those of the military), have not been about to agree on this sharing.

But Schmidt said that the Defense Department is already committed to spectrum sharing going forward.

Using this sharing model, Schmidt estimated that the U.S. could have a viable 5G network within two to three years in most city and suburban areas.

The U.S. has a pattern of having the FCC auction off spectrum to the highest bidder, in part because of the high revenues it produces for the Treasury Department, and the competition it encourages among providers, Schmidt said.

But he said that this model is flawed because it is a less efficient use of spectrum.

“Everyone is organized around auctioning because they like the revenue, without understanding that if you create this sharing model, you’ll create far, far more money in terms of sharing revenue, but also in terms of gross revenue because everyone gets more productive.”

Instead, he suggested that the Defense Department keep the spectrum and “issue an [request for bids] to have a dedicated national security network with a dual use that would be commercial on a wholesale basis, with a buildout requirement.”

Schmidt suggested using the Citizens’ Broadband Radio Service to apply last mile wireless and using these technologies on a fixed basis, terming this the “best engineering compromise for now.”