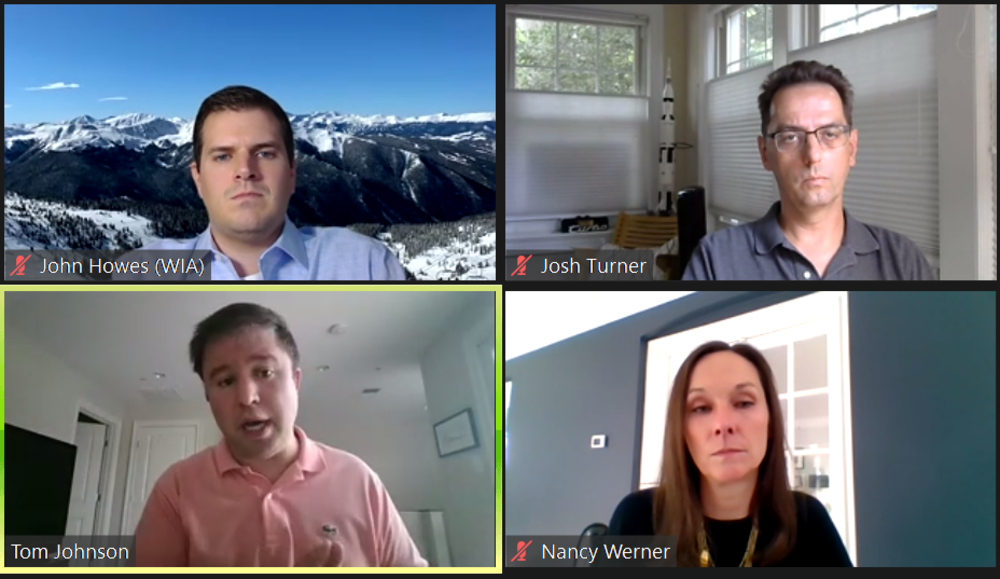 Screenshot from the FCBA webinar

October 20, 2020 — Industry officials and policy-makers who want the Federal Communications Commission to take a more active role in prescribing local rules for wireless facilities said that the rules in place for a 4G world of tall cellular towers don’t make sense in a 5G world.

Speaking at a September 29 event of the Federal Communications Bar Association, these officials contrasted 4G technology, which only requires a few tall cellular towers to deploy widespread access, to 5G technology. The newer technology requires “small cell” transmission facilities, and it requires a lot of them.

Yet, the FCC was tasked with interpreting aged, ambiguous language from the Telecommunications Act of 1996  to create rules governing the rollout of 5G small cells, these panelists said.

“The Commission, in a series of orders, interpreted old standards for the new form of technology,” said John Howes, government affairs counsel at the Wireless Infrastructure Association. Through a series of 2018 decisions, the FCC established rules regulating fees, put in place a moratorium order, formed aesthetic requirements, and more.

In response, countless local governments, pole-owning utilities, and wireless carriers petitioned for review of multiple aspects of the orders that were briefed and argued in the Ninth Circuit Court.

According to the panelists, the main argument made by municipalities protesting the FCC’s orders was that the agency’s standards were inconsistent with the Ninth Circuit’s interpretations of law.

“Municipalities argued that the FCC’s interpretations of Sections 253 and 332 of the 1996 Act, did not line up with what the rulings say local government can do,” said Nancy Werner, general counsel at the National Association of Telecommunications Officers and Advisors, which is critical of the FCC’s wireless deployment order.

On August 12, 2020, a three-judge panel in the City of Portland v. FCC rejected multiple of the challenges to the Federal Communications Commission’s Small Cell, Local Moratoria, and One Touch Make Ready orders.

Many have called the decision an undeniably win for wireless and wireline providers. “The order was fantastic from the point of industry,” said Josh Turner, partner at the Wiley Rein law firm. “It was hugely helpful in setting rules so everyone could understand what can and can’t be done.”

According to Tom Johnson, general counsel at the FCC, the agency also viewed the Court’s decision as a win. “The court gave us a lot of leeway to decipher the earlier language of the 1996 Act,” he said, adding, “the move will also help expedite broadband deployment.”

The battles between the FCC and local government are nowhere near done, as there are currently pending siting reforms throughout the Trump Administration, including regarding Section 6409 of the 2012 Spectrum Act, and other measures dealing with franchising and pole attachment proceedings and siting on federal lands.

Are Open Radio Access Networks Merely a 5G Fad? Or Will They Spur Innovation and Lower Costs?