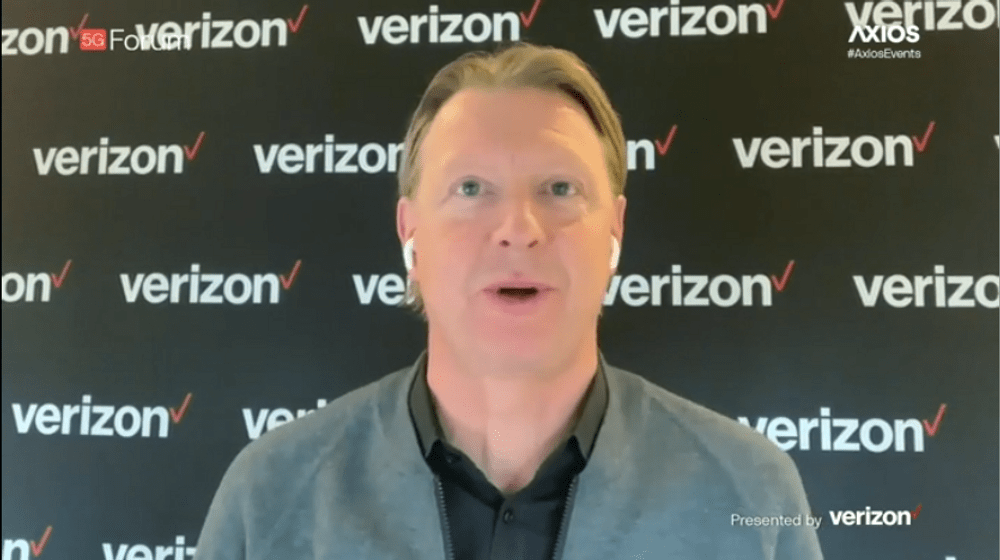 November 16, 2020 — “5G has capabilities that are far beyond being only for consumers,” said Hans Vestberg, CEO of Verizon. “5G offers eight additional capabilities, some of which are only for industry.”

“On 4G, you can connect 100,000 devices per square kilometer,” he said at Axios event on Tuesday. “Meanwhile, on 5G, I can connect one million devices.”

According to Vestberg, the design principals behind 5G were intended to transform industry and society in ways that previous generations of cellular communications networks were not. “If it were just about cell phones, we wouldn’t need 5G,” he said.

Previous advances in mobile technology were aimed at improving consumer experience. In the transition from 2G to 3G, two additional capabilities were included, speed and throughput. With 4G, live streaming capabilities were improved.

“When designing 5G we thought ‘we need to do even more’ to transform industry and society,” said Vestberg.

The Axios event brought together individuals from public and private sectors to demonstrate the impact 5G stands to have on different industries.

Orbi Prime, in collaboration with Telit, a global enabler of the Internet of Things, has manufactured the world’s first football helmet with 360° video cameras shooting in 8K at 60 frames per second. The ORBI 5G helmets will enable fans to experience the game from the player’s perspective.

Rakhman’s invention highlights the ways in which 5G is enabling companies to create breakthrough products and services.

“The high bandwidth and minimal delay of 5G is essential to bringing new types of experiences to increase engagement among fans of various ages,” he said, “this game-like, immersive experience for viewers would not be possible otherwise.”

John Long, co-founder of Qwake Technologies, joined the discussion to review how 5G’s improved bandwidth and low latency is critical for emergency responders. With 5G capabilities, first responders can utilize visual communications platforms, which were previously inaccessible to them.

Baldwin was a founding member of Innovate Raleigh, a non-profit organization committed to making the region a top center for innovation and entrepreneurship in the nation, nine years ago.

“Part of our goal is to embrace innovation to better our community and use technology to make Raleigh smarter,” said Baldwin.

Baldwin said the city of Raleigh is aiming to utilize 5G not only to advance data on vital operations, such as climate change and traffic congestion, but also to empower the cities large gaming community.

‘A No-Nonsense Guide to 5G’ Kicks Off With Discussion About Spectrum, Rights of Way and Wall Street