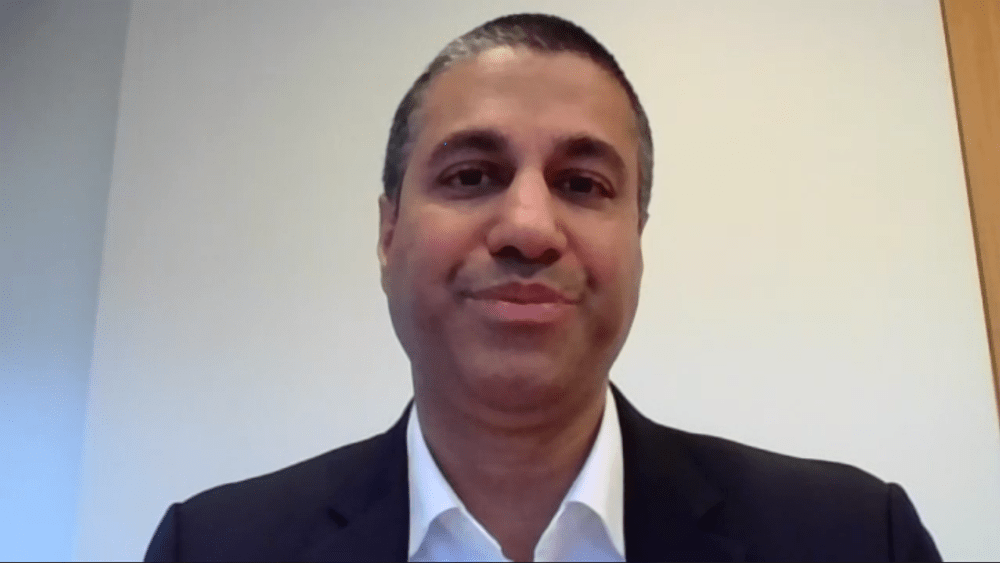 November 30, 2020 — Federal Communications Commission Chairman Ajit Pai on Monday announced today that he would step down from his current role when President-elect Joe Biden is inaugurated on January 20, 2021.

“It has been the honor of a lifetime to serve at the Federal Communications Commission,” said Pai of his eight years working at the United States’ telecommunications regulatory agency, in a statement issued Monday morning.

See what industry groups have to say about “Broadband in a Biden Administration” on Wednesday, December 2, 2020, during Broadband Breakfast Live Online

Pai was appointed to the FCC as a commissioner in 2012 by President Barack Obama and was promoted to chairman in 2017 by President Donald Trump.

The soon-to-be former chairman made an appearance in a webinar hosted by Columbia Law School’s Federalist Society on Monday, during which he expanded on his written notice and his time spent at the FCC.

Pai noted the tumultuous political environment he was thrust into, detailing what it was like to serve under two very different presidential administrations.

“With the exception of a few high profile matters, the FCC has been immune from the political partisanship” that effects other spheres of government, said Pai, who stood by his 2017 decision to repeal net neutrality, claiming that a market-based framework serves consumers best.

According to Pai, the day-to-day tasks of the agency have remained largely the same through fluctuations in government.“ The bread-and-butter work that we do has generally not been something that is politically affiliated,” said Pai, adding that the progress the agency has made on bipartisan matters is what he is happiest to consider a part of his legacy.

Pai touts his work on the digital divide

Pai said he was most proud of the agency’s efforts to close the digital divide, expressing it was the number one way he felt he impacted society. He recalled connecting tribal lands in the middle of a low-income region of Wyoming to high-speed gigabit broadband service.

Pai noted that under his leadership the United States set consecutive records for new fiber deployment in 2018 and 2019, with the number of homes passed by fiber increasing by 5.9 million, and then by 6.5 million the following year.

He further recalled that the agency has held five successful spectrum auctions in the past four years, after only holding one in the four years Pai served as a commissioner under the Obama administration.

Pai recognized that the work he and his fellow commissioners did to designate ’988’ as the number for the National Suicide Prevention Lifeline. He also touted his efforts to ensure that rates for interstate and international phone calls are reasonable for incarcerated individuals, will be some of his most impactful.

Pai recognized a change in the communications landscape over the course of his career at the FCC, adding that he believes communications regulation must change to meet the moment.

As the first member of the FCC on Twitter in 2012, Pai watched social media sites develop into what they have become today, recalling that in 2012, “no one could criticize social media corporations.”

Yet today there is bipartisan recognition that change is needed. Pai said “it will be interesting to see what Congress will do to regulate big tech.”

Pai detailed the personal thought process behind his October statement on Section 230, which claimed that the FCC does have the legal authority to interpret the terms of Section 230, saying that “there is currently no transparency about how social media companies are making decisions when it comes to content regulation.”

Pai said “the rule making would have allowed the FCC to question broader things, like what it means for social media sites to regulate sites in terms of ‘good faith.’”

Pai offered advice to his successor, whomever it might be, urging that the future FCC chair make efforts to spend time with the FCC’s staff.

“I’m proud to say I’ve done that, and it enabled us to work better as a unit,” said Pai, who referred to the FCC’s staff as the agency’s best asset.

As for what lies ahead, Pai said he is still considering his options and “taking time to think about it.”

“It’s been a great run but it’s time for a new adventure,” said Pai, who joked about potentially replacing Judge Judy or becoming a slot receiver for Kansas City Chiefs.

“Throughout his tenure, and never more so than during these challenging days of the pandemic, Chairman Pai has prioritized bridging the digital divide and connecting all Americans everywhere to 21st century communications networks,” said Jonathan Spalter, US Telecom CEO. “Our nation’s broadband providers who invest in innovation, dig the trenches, pull the fiber, and climb the poles share that commitment.”

“We commend Chairman Pai for his exceptional stewardship of the Federal Communications Commission,” said NCTA CEO Michael Powell, himself a former FCC chairman. “He set a clear vision for his tenure and the industry and pursued it with purpose, transparency, scholarly rigor and courage.

“During his time as chairman he frequently faced overheated criticism and personal attacks that have become sadly common in the sphere of policymaking,” said Powell of NCTA, which also goes by the name of Internet and Television Association. “During his tenure, Chairman Pai pushed for policies that spurred investment and innovation in our nation’s communications networks while also expanding the benefits of broadband to all Americans.”

“Chairman Pai has been a huge champion of the fixed wireless industry, with his FCC’s tireless efforts to identify, free-up and share spectrum that would otherwise have gone fallow,” said Claude Aiken, CEO of the Wireless Internet Service Provider Association. “He helped keep regulation low, and worked to remove other related burdens, which was especially helpful for our small WISP members.  And his dedication to reducing the digital divide, in particular in rural America, is without parallel.”

See what industry groups have to say about “Broadband in a Biden Administration” on Wednesday, December 2, 2020, during Broadband Breakfast Live Online