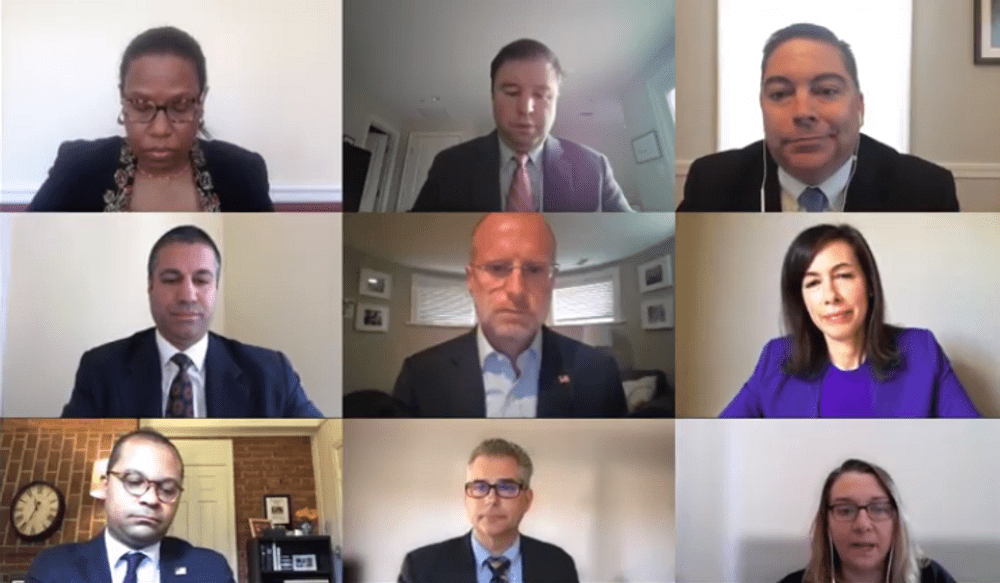 Screenshot from the FCC November meeting

November 19, 2020 — The Federal Communications Commission on Wednesday repurposed 45 megahertz of spectrum in the 5.9 GigaHertz (GHz) band for unlicensed operations, stating the spectrum had been poorly utilized by its former proprietor. The decision was unanimous.

In 2004, the agency dedicated 75 megahertz of spectrum in the 5.9 band to the auto industry for improving Dedicated Short-Range Communications between motor vehicles, in an apparent move to enhance public safety.

After nearly two decades of waiting for the industry to broadly deploy DSRC technology, “only a few thousand vehicles, out of the roughly 274 million cars and trucks on our roadways, have this technology on board,” said Commissioner Jessica Rosenworcel.

The FCC‘s ruling not only reallocates spectrum for commercial wireless use, but further updates the agency’s policies regarding intelligent transportation system services, by authorizing the use of connected vehicles technology called C-V2X, a cellular vehicle communications technology.

As C-V2X proponents still seek access to the band, the agency’s decision retains 30 megahertz of spectrum for automotive ITS services.

However, to ensure the maximum value of the long underutilized spectrum is realized, the lower 45 megahertz of the band, which sit next to the existing unlicensed 5.8 GHz band, will be utilized to support Wi-Fi necessary for telemedicine, education, and other valuable services, at a time when American’s need it most.

“What is most promising about this delegation is the ability of Wi-Fi providers to rapidly incorporate existing offerings, as soon as the order is effective,” said Commissioner Mike O’Rielly.

Many private and public entities have spoken out, commending the agency’s decision

It allows immediate widespread indoor use of the lower 45 megahertz of the band. But a further rulemaking is pending. It would allow WISPs to permanently use the 45 megahertz outdoors.

“We look forward to working with all stakeholders to maximize the band for broadband consumers who need this unlicensed spectrum to stay connected during the pandemic,” said Paraertz.

NCTA, the Internet and Television Association, also endorsed the FCC’s united choice, saying that the “Commission’s bipartisan approval of a band-split approach will enable the creation of a new, wide indoor Wi-Fi channel that can quickly be brought online for American consumers, while also preserving sufficient spectrum for new automotive safety innovations.”

The addition of 45 megahertz of unlicensed spectrum will create Wi-Fi channels capable of supporting the next standard Wi-Fi 6. This will enable wireless providers to dramatically increase the speed and reliability of rural broadband and increase the power of public hotspots and mobile hotspots, on which many low-income families rely, said Feld.

“In addition, the FCC will phase out the outmoded vehicle communication technology selected as the standard 20 years ago and will phase in a modern, more efficient technology requiring substantially less spectrum for collision avoidance and safety,” he said.