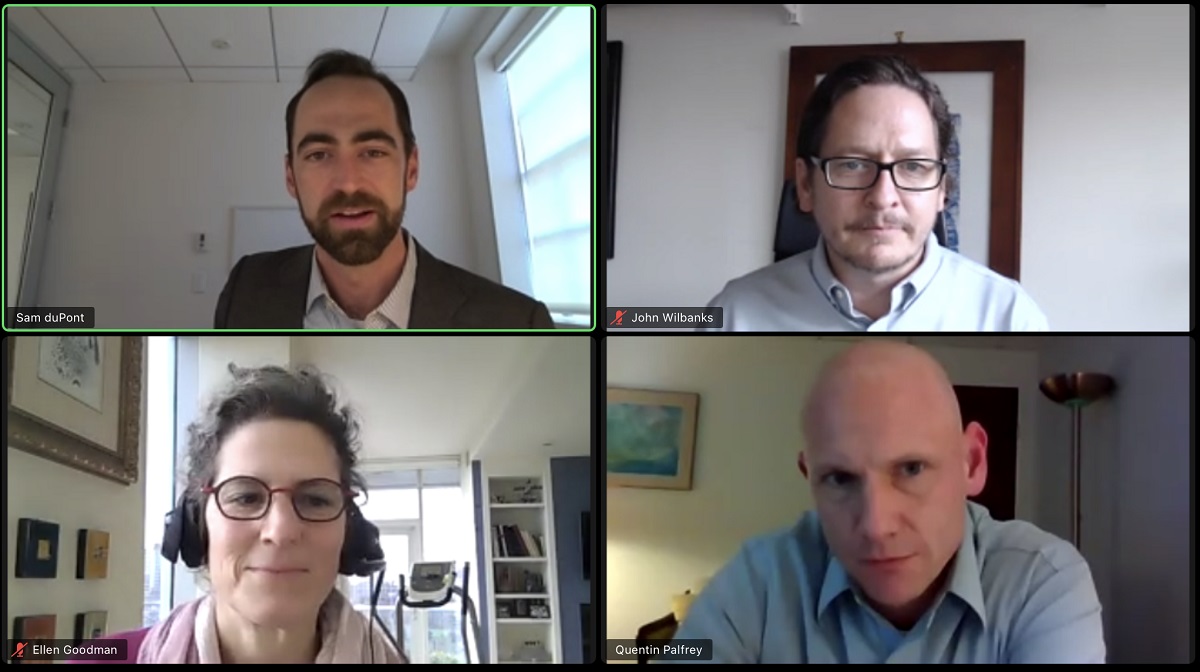 Screenshot from the second panel, including moderator Sam DuPont, deputy director of the German Marshall Fund

November 23, 2020 – Americans need to have secure and unique digital identity documents if the county has a hope to compete with other world powers like China, said Toomas Ilves, former president of Estonia.

Ilves was speaking at a German Marshall Fund event on Friday what asked on what subject he thought the Biden administration should focus. However, he said, he believes it to be politically impossible to for the United States to create such an identity.

To create this digital identity, U.S. citizens would need to be required by law to carry an identification document that is backed with end to end encryption, two factor authentications, and a population registry.

Ilvis also suggested that Americans could put all of this information on a chip and attached it to our driver’s licenses. He said he had seen congressmen with ID’s that had a chip decal but was unsure if any of them had computer chips embedded in the ID. Also participating in the session, Rep. William Hurd, R-Texas, was intrigued enough to say he would follow up on it.

But Ilvis also acknowledged that the America’s libertarian stand – in culture and in law – was likely strong enough to keep his suggestion from every happening.

One step toward digitizing all government processes

Creating a digital identity is important, he said, because it is a step toward digitizing all government processes. According to Ilvis, there are only three things that cannot be done online—marriages, divorces, and selling real estate with a proxy from a holding company.  In the latter case, a member of the board must show up.

In general, Hurd agreed. He called for more data, better data, and open data to be put online.

Hurd said that he was recently trying to get data on how many pencils the government had given out and was told he might not be able to get that information for two years. He advocated for the digitization of such data, including any studies that are funded by the government.

In the competition with China, Hurd emphasized that the U.S. should build a workforce for the future, and specifically mentioned creating coding academies to educate the workforce.

Hurd also emphasized coming to terms with the European Union’s General Data Protection Regulation. America needs to get over this transatlantic spat because the country has much more in common with Europe than with China on privacy.

He called for the creation of a national data breach standard in the U.S.

All of this matters, he said, because the algorithms that are driving artificial intelligence need information, he said. “This is a race. There’s no second place in this race.”

Second panel on suggestions for the Biden administration

Several panelists on a second panel had suggestions and expectations for the new administration.

Quentin Palfrey, president of the International Digital Accountability Council and senior fellow for the German Marshall Fund, said that to reach our national goals, we need federal privacy legislation, “regardless of what happens in Georgia on January 5,” referring to the runoff elections for the Senate that will determine which party controls the chamber.

Palfrey suggested the rules be as clear and harmonized as possible and that individuals making business decisions were educated in those rules. He also said there should be nimble accountability so people can be “tapped on the shoulder” before they break the rules.

He agreed with Hurd on the need to reconcile U.S. privacy law with the GDPR.

Ellen Goodman, law professor at Rutgers and senior fellow for the German Marshall Fund, said he hoped there would be a stimulus that will provide incentive for physical and broadband infrastructure needed to close the digital divide.

John Wilbanks, chief commons officer at Sage Bionetworks, said there are more ways to regulate than just the traditional ones and said the government should be bold and encourage competitive ecosystems.

Ilves urged the German Marshall Fund to help Congress set its oversight agenda for its committees because the document lays out where the gaps are.

Big Tech Companies Talk the Talk on Privacy at CES 2021: Will They Walk the Walk?