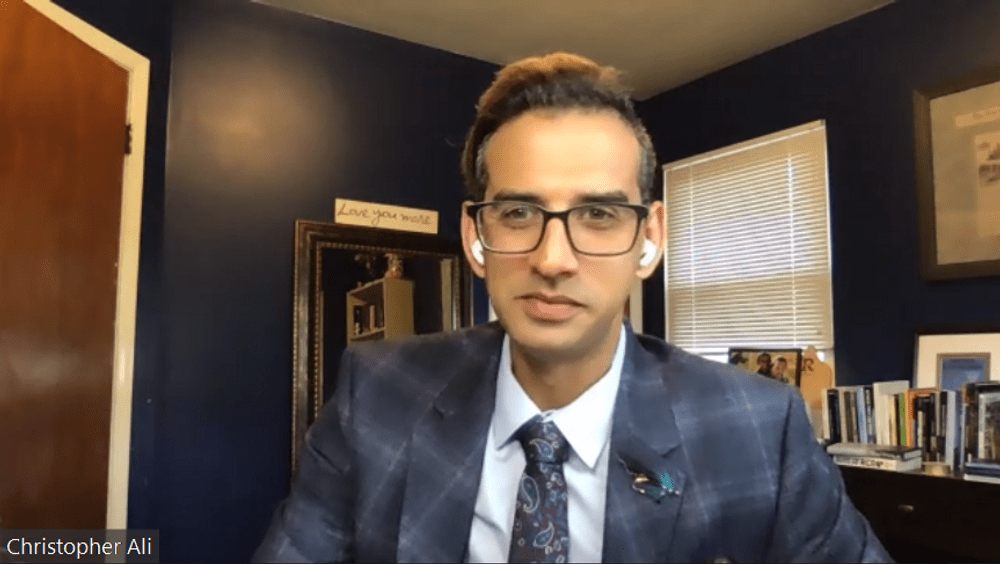 Screenshot from the presentation

November 12, 2020 — The failure to connect the rural-urban digital divide in the United States is not one of technology, but of markets, politics, and policy, argued Christopher Ali, associate professor in the Media Studies Department at the University of Virginia, during a virtual presentation which aired Tuesday as part of a global media policy seminar series.

“There is an ongoing political and policy conversation claiming it wants to amend the digital divide, but none of the ground work is being done,” Ali said, “How can we explain these discrepancies?”

Ali wrestled with multiple explanations for the persistence of the digital gap, ultimately finding that broadband policy in the U.S. is defined by “the politics of good enough,” which encourages the fast deployment of outdated technologies and benefits the largest telecommunications and satellite companies.

Ali recognized four main failures in broadband policy, the first being a failure of management.

He highlighted that the U.S.’s polycentric broadband regulatory environment further increases the complexity of oversight, as the FCC is not the only federal agency which plays a role in regulating broadband policy. Other supervisory bodies include the U.S. Department of Agriculture and the National Telecommunication and Information Administration.

“If you’ve been to Washington, D.C. you know that the FCC and the USDA are physically located roughly one or two blocks apart from each other,” said Ali, “but in terms of policy coordination they couldn’t be farther apart.”

Ali believes “the U.S. ends up with legitimacy issues,” as a result of the government’s failure to coordinate.

In order to remedy these management issues, Ali recommended that the incoming presidential administration reinstate net neutrality regulations and mandate coordination between the USDA, the FCC, and the NTIA.

“Without net neutrality the FCC has very little power to tell corporations what to do,” said Ali, saying restoring net neutrality would allow the FCC to become “the watchdog and champion of broadband deployment that we want it to be.”

“I’m hoping this will be a major priority of our new administration,” he said.

An outdated definition of broadband

The second failure of broadband policy Ali finds to persist, is a failure in ‘meaning’.

Ali argued that the 25/3 Mbps definition of broadband does not reflect Americans’ current broadband needs or usage, and further, when coupled with the agency’s policies of technological neutrality “favors inadequate technologies provided by incumbent telecommunications and satellite companies.”

“The 25/3 definition and the FCC’s stances of technological neutrality, allowed ViaSat, a satellite provider, to be one of the greatest winners in the FCC’s 2019 reverse auction,” said Ali.

He recommended the Biden FCC raise the definition of broadband to 100/100 Mbps, to drive technological innovation, and encourage the deployment of fiber resources.

Broadband mapping continues to be a serious problem

The third broadband policy failure Ali highlighted is a failure in mapping.

The Virginia professor blamed the standards of Form 477, a broadband mapping form that has become infamous in tech circles for breeding vastly overstated data, as the root cause of the mapping fiasco.

Under Form 477, “so long as one building in a census block has broadband, everyone within the census block is reported to have it,” said Ali. Further, the form allows “ISPs to report advertised speeds, and not actual speeds.”

Another reason for the inflation of Form 477 data, is that satellite coverage, which offers notoriously unreliable connections even on the clearest of days, is included in the FCC’s broadband map data.

“FCC numbers are grossly inflated,” said Ali. “A U.S. Telecom Study found 38 percent more broadband deserts than the FCC reports.” Ali detailed the real-life consequences of the inflated data, by reporting the results of a case study he conducted on Louisa County, Virginia. The central Virginia county is ineligible to apply for any federal broadband loans or grants, due to the inflated speeds satellite and cable providers report to the FCC.

A failure of federal funding

The fourth and final broadband policy failure Ali brought attention to is money.

According to Ali, money from the two major sources of federal broadband funding, the FCC’s Universal Service Fund and the USDA’s Rural Utility Service, tends to favor incumbent providers as recipients.

“Federal money from the FCC’s Connect America Fund was granted to the nine largest telecommunications companies,” said Ali, including AT&T, Frontier and CenturyLink.

The companies had minimal buildout requirements, and as they were given a broadband threshold of only 10/1 Mbps to meet, most of the incumbents choose to deploy DSL, rather than fiber.

According to Ali, two of the funding recipients, CenturyLink and Frontier, did not live up to build out potential, yet “neither company was punished for it, and they are still eligible for more money.”

Ali called for the next FCC to punish companies for failing to deliver and end the tradition of incumbent favoritism.

An upcoming book on rural broadband

If you’re left wondering, “where exactly does the 6 billion dollars the federal government spends annually on broadband go?” you’re not alone. In his upcoming book Farm Fresh Broadband, which will be published by MIT Press in 2021, Ali makes an effort find out.

In order to write the book, Ali analyzed over 10,000 pages of policy documents from 2009 to 2020 and conducted a 3600-mile road trip across the United States, during which he spoke with anyone and everyone who would talk to him about broadband, from elected officials, farmers, and librarians, to people in grocery stores.

Farm Fresh Broadband not only attempts to humanize, and put a face to, policy, by understanding how broadband policy is lived and experienced in rural America, the book further unpacks the politics of broadband policy, asking why millions of rural Americans lack broadband access and why the federal government, and large providers, are not doing more to connect the unconnected.