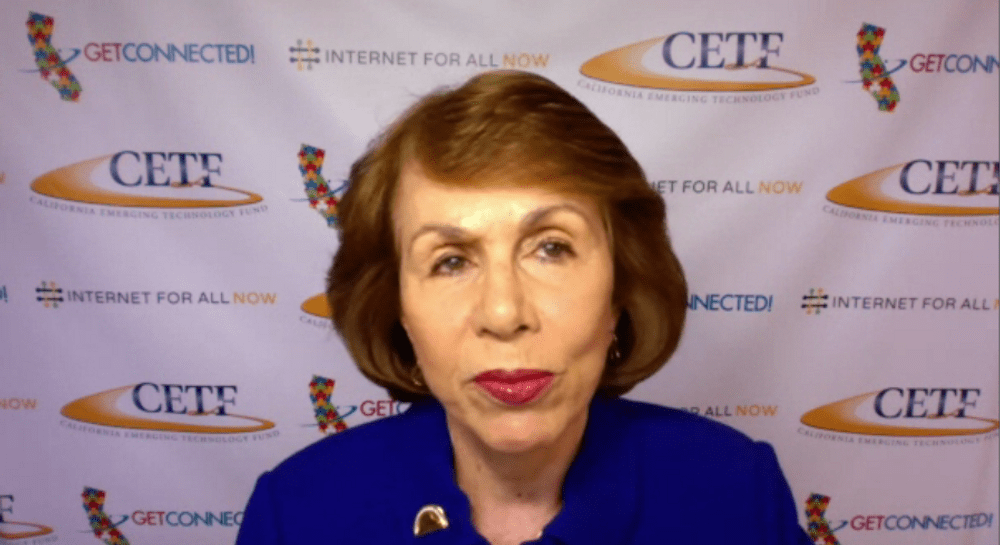 Photo of Sunne Wright McPeak from the webinar

November 17, 2020 — A group of broadband enthusiasts on Friday urged a new national broadband plan and that the nation act on addressing issues of digital equity.

“The time for action is now,” said Sunne Wright McPeak, CEO of the California Emerging Technology Fund, which co-hosted the virtual forum with California Forward and other leading experts. “The COVID-19 pandemic laid bare widespread inequities turning the digital divide into a digital cliff.”

In opening remarks, Benton Institute for Broadband & and Society Senior Fellow Jonathan Sallet called for a revival of the national broadband plan that was adopted in 2010.

He said “2020 made it clear that a national broadband agenda which outlines how to achieve universal service within the next decade is desperately needed.”

In the absence of the federal government preparing such a 10-year plan, Sallet attempted to draft one of his own.

In a recent report authored by Sallet, “Broadband for America’s Future: A Vision for the 2020s,” he discusses how public policy can close the digital divide and extend digital opportunity everywhere.

Photo of Jonathan Sallet from the webinar

Sallet concludes that three digital divides currently persist within the U.S., standing in the way of the country achieving ubiquitous service: the urban-rural digital divide, the affordability and adoption gap, and the competition divide, which limits the number of broadband providers consumers have to choose from, and the range in prices those providers offer.

Sallet’s report emphasizes that closing each of these divides will have critical effects for the American economy, currently suffering from some of the highest levels of income inequality around the globe.

According to Sallet, the next decade will be critical for addressing the drastic income divide within the country. Broadband has a critical role to play in empowering workers to tackle looming opportunity gaps, panelists said.

The report calls for promoting broadband competition at the local level by repealing state laws in place that restrict municipalities and counties from experimenting with various ways of increasing high performance broadband deployment.

Sallet also attempts to redefine the rhetoric around “overbuilding,” saying what many call with a pejorative term should really be considered something more familiar and friendly: Competition.

“Local anchor institutions provide opportunities for digital literacy training, so people can think of themselves as producers, not just consumers,” said Windhausen. “Adoption efforts do more than just help people gain skills and jobs, they increase civic engagement and participation in democratic processes.”

Community leadership is key because local governments and anchor institutions are closest to local needs and have earned Americans’ confidence and trust, said Sallet.

Major Change on the Horizon? Explaining the Affordable, Accessible Internet for All Act

Broadband and Education Policy Needs a Rethink in the Biden-Harris Administration, Say Panelists