December 7, 2020 – The Federal Communications Commission on Monday announced that it had awarded $9.3 billion in broadband funds (PDF) for rural Americans, over 10 years, through the recently-concluded Rural Digital Opportunity Fund auction.

About 5.2 million locations in rural America will now gain access to high-speed internet service through the first phase of the RDOF reverse auction.

Results showed that Charter Communications, bidding as CCO Holdings, was the biggest RDOF auction winner, when measuring by the number of locations, reports Telecompetitor. The cable company won $1.22 billion in the auction, which was completed early last week, to bring service to over one million locations in 24 states.

Charter was not the biggest winner, when measuring by funding. Using that metric, the biggest winner was LTD Broadband, which won $1.3 billion. That company won funding to bring broadband to 528,000 locations in 15 states.

The federal government was able to obtain broadband service for 5.2 million of the 5.9 million target locations, and is only paying $9.2 billion, or only 57.5 percent of the $16 billion it had targeted spending in this first phase of the auction.

According to the FCC, 99.7 percent of RDOF auction winners have committed to deploying broadband service at speeds of at least 100 Megabits per second (Mbps) download/20 Mbps upload, and with a full 85 percent deploying gigabit broadband.

The FCC said that results pointed to the success of the weighting system used in the auction, which was designed to favor bids to provide higher-speed service.

Big name companies that qualified to bid in the auction but are not on the RDOF auction winners list include Verizon, ViaSat and Cox.

The total amount of funding awarded was $9.3 billion for 49 states. The auction had been budgeted to award up to $16 billion, which means that the non-awarded balance of $6.7 billion will be allocated toward Phase Two of the RDOF auction.

Assistant Editor Jericho Casper graduated from the University of Virginia studying media policy. She grew up in Newport News in an area heavily impacted by the digital divide. She has a passion for universal access and a vendetta against anyone who stands in the way of her getting better broadband.

Experts say it’s difficult to get an understanding of cost for connecting rural regions without quality maps. 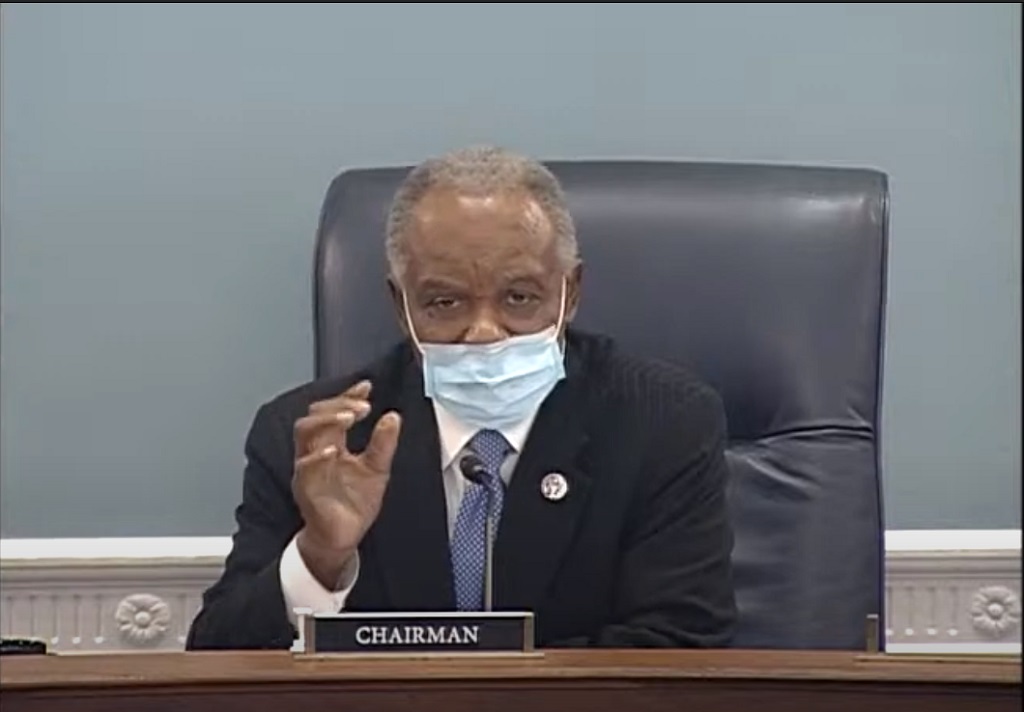 Screenshot of David Scott from the House agriculture meeting

April 22, 2021—The House Agriculture Committee convened a hearing this week to discuss the needs and costs associated with expanding broadband coverage to rural constituencies, hearing that accurate maps will be needed to get a better idea of those costs.

Chairman David Scott, D-Georgia, wanted concrete numbers during the hearing held Tuesday. He pressed witnesses for what they believed it would cost to cover the estimated 24 million rural Americans who are currently living in underserved areas of the country.

Vickie Robinson, general manager of the Microsoft Global Airband Initiative, was hesitant to throw out a hard number. “There are estimates that suggest that the cost to reach those that are unserved is anywhere from 60 to 80 billion dollars,” Robinson said. But those estimates should not necessarily be relied upon, she said, adding, “We haven’t first done the hard but necessary work to accurately map where those gaps exist.”

Robinson said the FCC currently does not have the tools necessary to effectively map these gaps, and that congress could enable them to do so by providing better funding for the Broadband Data Act that was passed in March of 2020. She stated that only after this mapping is completed can the government begin to determine which technologies would be best suited to meet current demand, and ultimately, a price tag.

Could cost as much as $150 billion

Not all witnesses were so hesitant to provide estimates. CEO of the Wabash Heartland Innovation Network Johnny Park estimated that providing coverage for the rural regions in question would cost approximately $150 billion. He indicated that costs could be kept down by continuing to promote innovation, explore emerging technologies, and collect mapping data to determine how to best meet the needs of unserved Americans.

“It is not a one size fits all solution,” Park said. “We need to embrace a diversity [of technology] to make sure that the right type of technology is deployed.”

Scott closed out the meeting on an ominous note: “There is no mistake about it—China wants to take our place as the leading agriculture industry in the world.” He stated that while the rest of the world is continuing to push forward, the U.S.’s inability to get its farmers connected would result in it being surpassed by both allies and adversaries alike. 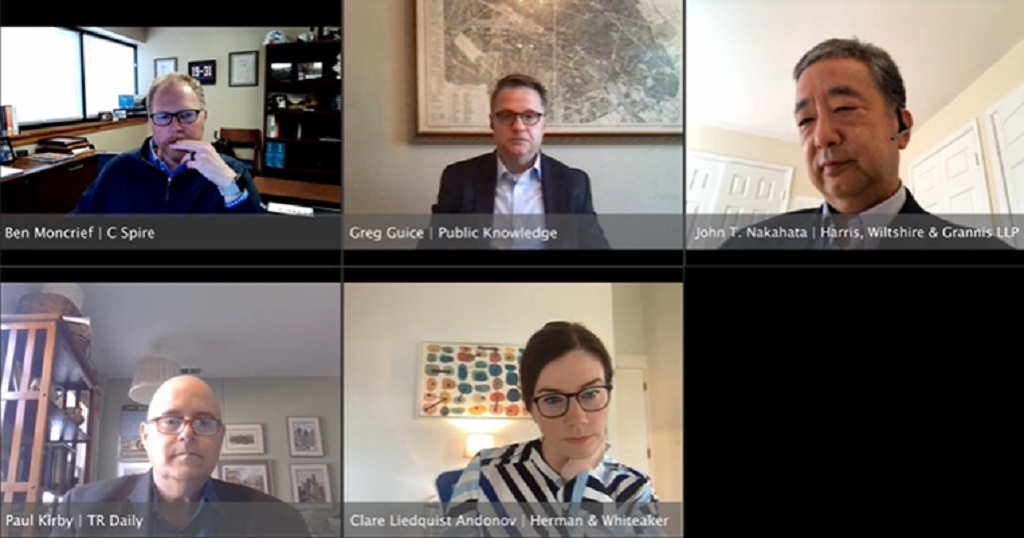 April 1, 2021 – Experts are concerns about the long-term implications of the $3.2-billion Emergency Broadband Benefit program (EBB) running out of money without a plan for what happens after.

The fund, created by Congress in December, provides up to $50 in a monthly internet discount for families and $75 for tribal lands to access broadband internet. The fund will cease when all the money is used up or within six months, whichever happens sooner.

Clare Liedquist Andonov, principal at Herman and Whiteaker, LLC, said Wednesday during the CCA mobile carriers show that if all people on Lifeline — an older FCC program that provides monthly discounts for eligible low-income subscribers for internet and telephone services – subscribe to the fund, the money will “be exhausted within about four months.”

John Nakahata, partner at Harris, Wiltshire and Grannis LLP, said both the EBB and Emergency Connectivity programs are simply short-term stimulus plans that are not designed to last long.

Andonov said she is concerned about what happens after such funding ceases to exist. “What happens after four months?” she asked. “Do you disconnect those people?” She said the infrastructure built to connect people online in the first place would go to waste if the EBB program ceased operations in a matter of months, alongside the administrative costs to run the program.

“In 2021, we should be able to bring high-speed internet to every family in America — regardless of their zip code,” said a press release from Klobuchar’s office. “This legislation will help bridge the digital divide once and for all.” If passed, Cole said it would allow the EBB program to last for an entire year; but even then, one year is not enough, they say, as broadband should be accessible for people indefinitely.

To address this challenge, there is some $100 billion set for recently-introduced broadband infrastructure bills being considered in Congress. That money is spread between three bills that would change the nation’s definition of served and unserved people with broadband by dramatically upping the threshold for broadband speeds. 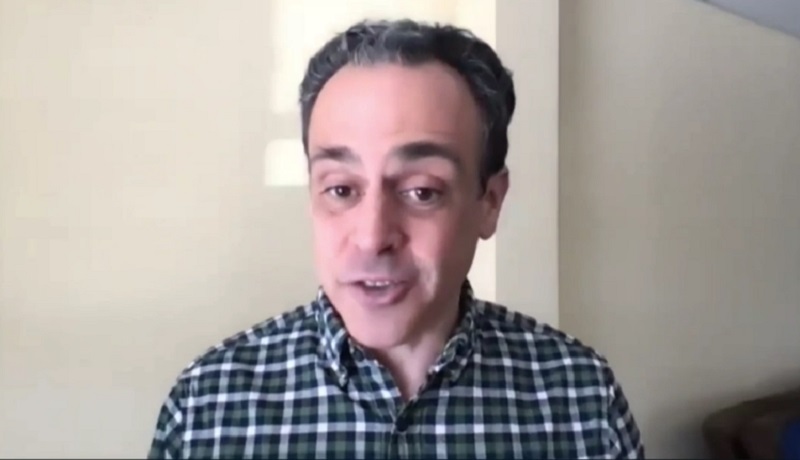 Photo of Matt Dunne from the webinar

March 11, 2021 – The Center on Rural Innovation is recommending telecom companies engage with local communities and invest in hyper-local programs.

Speaking at the second general session of the National Rural Broadband Association last month, Matt Dunne, executive director at the Center on Rural Innovation, said broadband players can power digital economies by investing in shared office spaces and accelerator programs like that of Springfield, Vermont’s.

He said providing in-kind bandwidth and Wi-Fi routers would go to supporting the local community.

He advocated for promoting tech culture initiatives for customers and encouraged broadband players to have a bigger role in being involved in the community as a friendly player.

In addition to promoting digital workforce resources and culture building, Black River has produced two startups which the Center on Rural Innovation Fund has made investments in since its beginning.