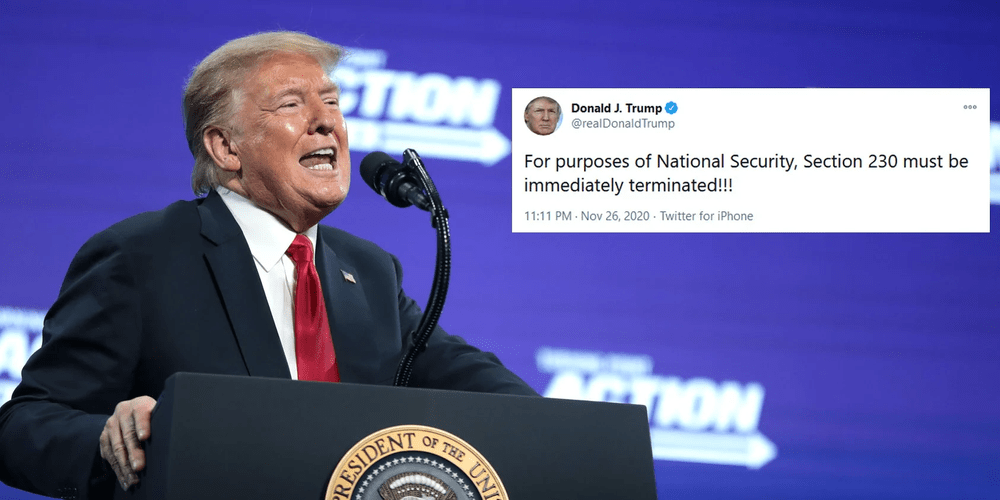 President Donald Trump is threatening to veto a critical defense spending bill unless Congress agrees to repeal Section 230 of the 1996 Communications Decency Act, the provision which grants social media companies a liability shield for content posted by third-party users.

The president ratcheted up the pressure on Congress in a pair of Tweets sent late Tuesday night, in which he threatened to nix the $740 billion National Defense Authorization Act, unless it includes the specified repeal.

The president tweeted that Section 230 of the 1996 Act is “a serious threat to our National Security & Election Integrity” and called the provision “a liability shielding gift from the U.S. to Big Tech.”

The veto threat is merely one of the president’s latest moves against social media giants, such as Facebook and Twitter. The threat came the night before the Senate Commerce Committee, chaired by Senator Roger Wicker, R-Mississippi, was set to vote on Trump’s Federal Communications Commission nominee Nathan Simington.

Simington is a former telecom lawyer, who was criticized for acting as an arm of the president when he helped author the National Telecommunications and Information Administration’s rulemaking calling for clarification of Section 230 in July. Trump directed the NTIA to file the petition after Twitter in May warned readers to fact-check his posts about unsubstantiated claims of fraud in mail-in voting.

Trump’s push for Simington to replace FCC Commissioner Mike O’Rielly has been criticized as another lame-duck action aimed at revoking Section 230. Trump and other conservatives believe tech companies are biased against conservative political views; however, the social media platforms say they are only trying to stop the spread of false claims and disinformation.

Lawmakers from both sides of the aisle have largely rejected a wholesale repeal of Section 230. While legislators have proposed revisions, no concrete legislative steps have been taken.

Last nights move marks the second time Trump has threatened to veto the NDAA defense bill. Over the summer, Trump pledged to tank the bill over a provision to remove the names of Confederate leaders from Army bases.

The FCC recently found that an electric utility company, operating in Maryland, made Verizon pay ‘unreasonable’ charges for attachments on their utility poles, as the Maryland company billed the maximum rate possible to the telecom giant.

The Commission concluded that the rates Potomac Edison Co. lodged against Verizon Maryland LLC were in violation of a 2018 order that made a preexisting competitive local exchange carrier rate a hard cap in order to “provide further certainty within the pole attachment marketplace” and “limit pole attachment litigation.”

In addition, the commission said Potomac Edison’s rate was particularly unjust compared to rates the company charged other cable companies to put attachments on the same poles as Verizon had.

Since the rate Potomac Edison charged Verizon was renewed and extended after the 2018 order, the FCC said the telecom giant was entitled to a rate “no greater” than the preexisting competitive local exchange carrier rate since January 2020.

The FCC calculated that rate to be $12.12 per year and ordered both companies to reach an agreement on how Verizon would be refunded the amount paid that exceeded the rate.

On Monday, the FCC made clear that phone companies may block robocalls associated with one-ring scams. The decision builds on the Commission’s continued efforts to provide phone companies with safe harbors for blocking unwanted, illegal robocalls.

In a typical one-ring scam, a consumer is robocalled, with the scammer disconnecting after only one-ring to induce the consumer to call back. Despite appearing to come from a domestic United States number, one-ring scam calls generally originate outside the U.S. and consumers who call them back incur toll charges, of which the scammer gets a share. The scam can also rely on phony voicemail messages urging a consumer to call a number to “schedule a package delivery” or to notify a consumer about a purportedly “sick relative.”

“Today’s action is just the latest step to stop illegal calls before they reach consumers’ phones,” said FCC Chairman Ajit Pai. “We are sending bad actors a clear message: We will use all available tools, including those in the TRACED Act, to protect American consumers.”