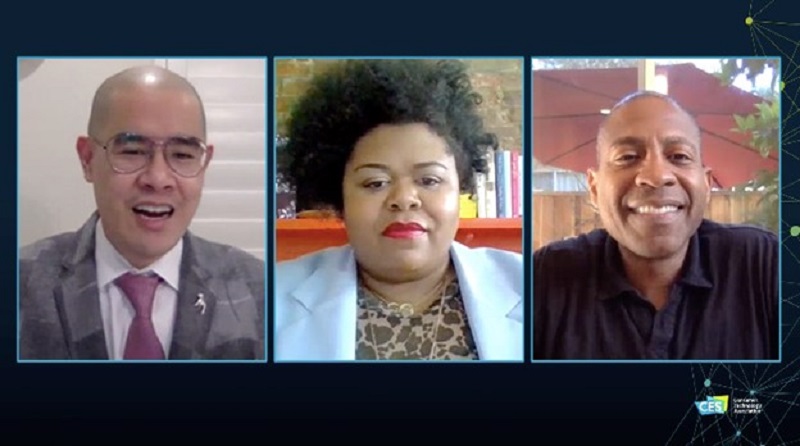 January 18, 2021 – Intersectional feminism was the hashtag Chana Ginelle Ewing used on Instagram before being found by a book editor searching for an author to write a children’s book about equality. Intersectionality was the term that describes the unique experience of social identity giving the opportunity to give voice.

The term has entered popular culture because it is a railing cry to talk about identity and representation, and panelists at a Wednesday event at CES 2021, which focused on how emerging technology and global platforms have fueled a revolution in content and commerce.

As a black and queer woman, Ewing said she felt confident enough with her identity to create her subscription-based business model in a way to give representation to communities where others are like her.

She has focused on the category of “beauty in the box” through her business Geenie. It’s a niche market of beauty for trans, disabled, and fat folks that she said had been left out of the conversation.

Where conversations already exists on the long tail of the internet, brands have been rising that with share and identify around their values.

Prior to the reckoning of the 2020 riots, eCommerce business was dominated by giants like Amazon that give the convenience to get products as fast as they want. But, Ewing said, that creates a scenario to diminish small businesses.

She said that the pandemic has made consumers more conscious of supporting other business as advocates, as in a circle of discovery and sharing. Shopping from such places makes them feel good, gives them what they need, and supports small business that are helpful to society.

Converging trends that spell opportunities for brands to do more than just participate in culture, but to create and cultivate it

Carlos Watson, CEO of Ozy Media after a career in the privately-owned media business was part of his effort to re-imagine the news world. Starting Ozy Media digitally was his way to reach millennials and Gen Z member.

Watson said he believes the 2020s will be the new 1960s, with a focus on families, changes in a work scenario, and technologies. The changes from 2020 to the 2030s will be outstanding and wildly disruptive, he said.

A wide difference of view from parents to children, in points of view, will be even bigger. A fresh set of media companies created by Gen Z will break into the mainstream.

And in such a highly charged political environment, Carlos believes that in this new decade, values in the economy will matter.

Often, he said, content businesses do not stand on their own. However, there is a robust opportunity for the audience to receive content in different forms. He promoted Ozy Media as audio elements, festivals, and other items. He said that his company’s content was not predicted by an algorithm, but provided easy navigation throughout.