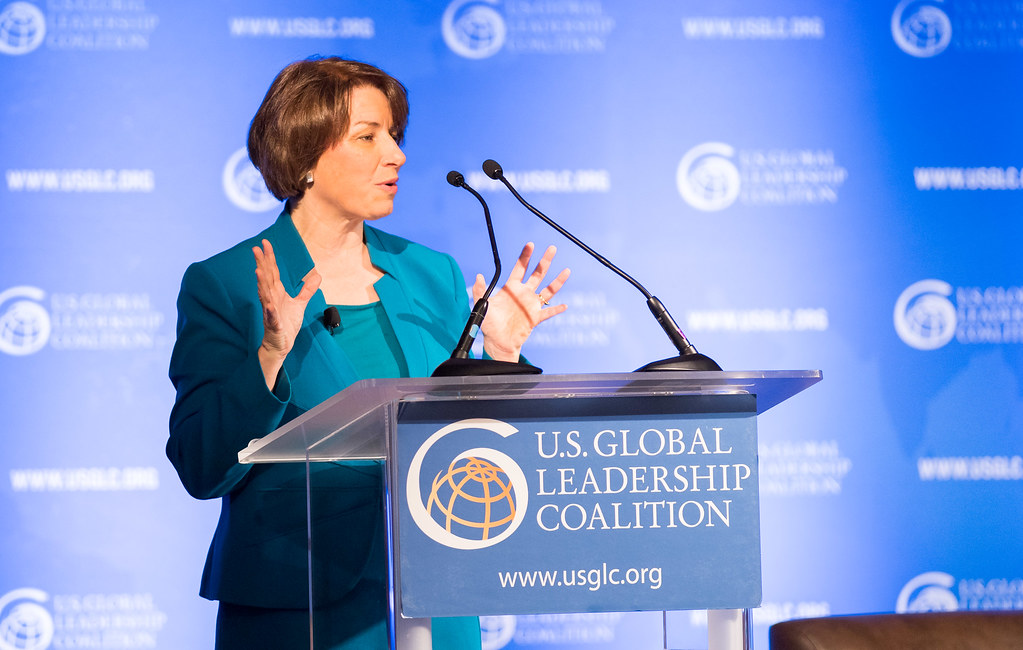 June 15, 2021 — Legal experts and policy makers were split in opinion over an expansive antitrust bill introduced in February by Sen. Amy Klobuchar, D-Minnesota, at an online seminar hosted by the Federal Communications Bar Association.

Klobuchar’s proposed bill would modify the laws regulating mergers and acquisitions to block certain anticompetitive conduct by larger firms, shift the burden of proof from investigators to the businesses themselves to prove anticompetitive practices have not been undertaken, and authorizes an increase in funding for federal antitrust enforcement.

Some of the panelists called Klobuchar’s bill an “all out mistake.” Others endorsed it, while also arguing that antitrust legislation would not be the only tool necessary to check Big Tech’s power.

Charlotte Slaiman, the competition policy director at Public Knowledge, believes that the danger of Big Tech is not just in the power they can accumulate through unregulated business practices, but in the power tech firms hold by virtue of the industry’s ability. She endorses Klobuchar’s bill, but believes that antitrust legislation is not the only tool that should be employed to reign in Big Tech’s power.

Bilal Sayyed, director of the Office of Policy Planning at the Federal Trade Commission under the Trump Administration, says that Klobuchar’s bill targets specific companies, and primarily takes issue merely at the companies’ size, without focusing on the harmful practices they may or may not be employing.

Slaiman says consumers usually help keep business practices in check because businesses are dependent on keeping their consumers happy in order to attract their business. She says that technology firms are similar in this way at their genesis, but this changes as the firms become more powerful. Eventually, “the customers need you [the tech firm] more than you need the customers,” she says. “The calculus completely changes.”

She said she believes the unique relationship of firms to customers in the big technology industry allows firms to employ practices that harm consumers, but in ways that antitrust laws won’t necessarily address.

In an interview with Harvard Kennedy School, Jason Furman, former chairman of the Council of Economic Advisers under the Obama administration, said “pro-competition regulation is not, however, the way to solve all of the social problems of Big Tech, of which the biggest is the contribution many believe they are making to spreading fake news and reinforcing politization. Additional approaches are needed to address those issues.”

Slaiman said, “We’re really concerned about the power itself. These companies should not be this powerful. And so it’s not just about relying on antitrust to address our problem. We need additional laws and rules on top of antitrust for Bit Tech.”

Big Tech’s size not the problem

Adam Kovacevich, founder and CEO of the Chamber of Progress, notes that while many take issue with the size of Big Tech, a company’s size is not enough to file antitrust complaints against them. He says that there can also be virtues associated with Big Tech’s size.

“There’s also an argument that their bigness allows them to do things that are pro-social, that are beneficial to consumers,” he says. “What you see is that everyone can agree—‘I have anxiety about their bigness’—but I think there’s not as much agreement as to whether they’re using their bigness to disadvantage people.”

Kovacevich says that while many people are concerned with the size of Amazon, many people relied on it as a “lifeline” for their groceries and other essential living utilities during the pandemic.

Kovacevich counters the argument that the massive quantity of data Big Tech has collected makes them a monopoly power by saying that innovation on the side of smaller firms would lead a collection of higher quality data, which would allow them to compete with Big Tech in new ways.

The future of antitrust

On Friday, a package of five new bills were introduced in Congress that aim to limit the power of Big Tech. The bills come as a response to the completion of a 16-month long investigation by the Antitrust Subcommittee completed last year, which scrutinized the business practices of Amazon, Apple, Google, and Facebook, which led to a report that accused the tech giants of harming consumer welfare and employing anti-competitive practices.

In October, the Department of Justice sued Google over anticompetitive practices used to preserve their alleged monopoly power, and in December, the Federal Trade Commission sued Facebook for similar reasons.