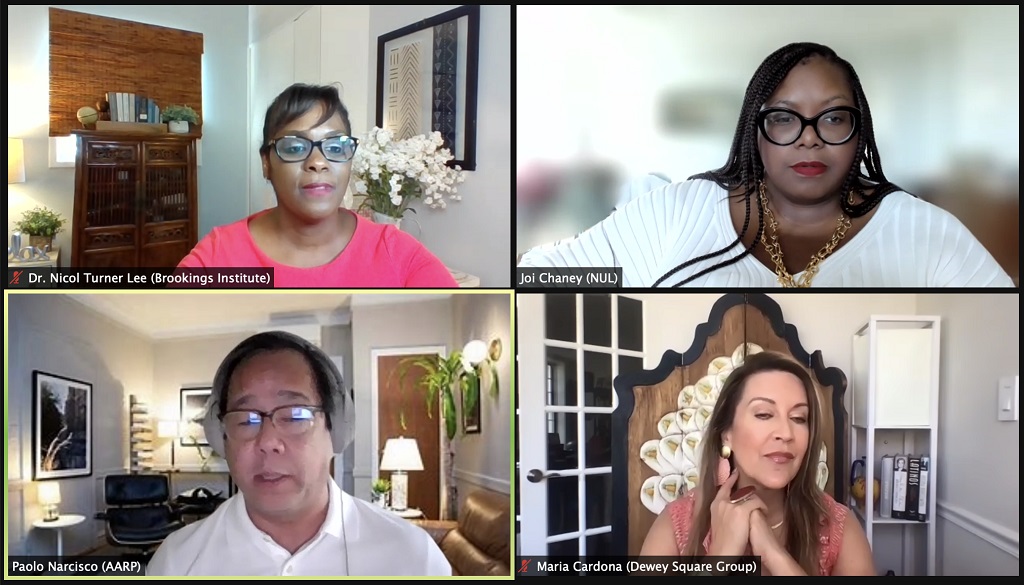 Federal Communications Commissioner Geoffrey Starks pointed to the importance of dependable internet access in people’s lives during the pandemic. “COVID-19 didn’t just tell us the digital divide was unfair and cruel — it’s a fundamental threat to our public health and our economic security,” he said.

Broadband access brings the opportunity for a much wider and broader reach to the digital ecosystem that women could not have without a digital connection, said Maria Cardona, principal at Dewey Square Group.

Cardona pointed to the importance of building programs that support entrepreneurship, promote digital literacy and improve technology access for marginalized communities such as women. Underprivileged women, especially refugees, often don’t have the digital literacy or access to the technology necessary to succeed in an increasingly digitized world, she said.

Three major groups have experienced some of the largest challenges: working mothers, women in senior management positions and Black women.

At the beginning of 2020, the representation of women in corporate America was trending upward with an increase of 5 percent of women in senior positions, according to McKinsey and Company. The pandemic had a near-immediate negative effect on women’s employment. One in four women reportedly considered leaving the workforce or downshifting their careers, as opposed to one in five men. One of the primary reasons cited was a lack of flexibility.

With the growing popularity of teleworking, panelists argued that broadband access allows all working individuals, and women in particular, the flexibility they need to balance work and their other responsibilities in order to remain in the workforce.

Many experts have noted the potential global economic benefits of investing in broadband infrastructure to connect more women. In the world’s least developed countries, women are 32.9% less likely to have internet access than men.

Intel announced in its ‘Women and the Web’ report that “if 600 million more women are connected to the internet in 3 years, this would translate to a rise in global GDP of between US $13 billion and $18 billion.”

Congress Must Prioritize Connectivity in Underserved Areas Over Higher Speeds