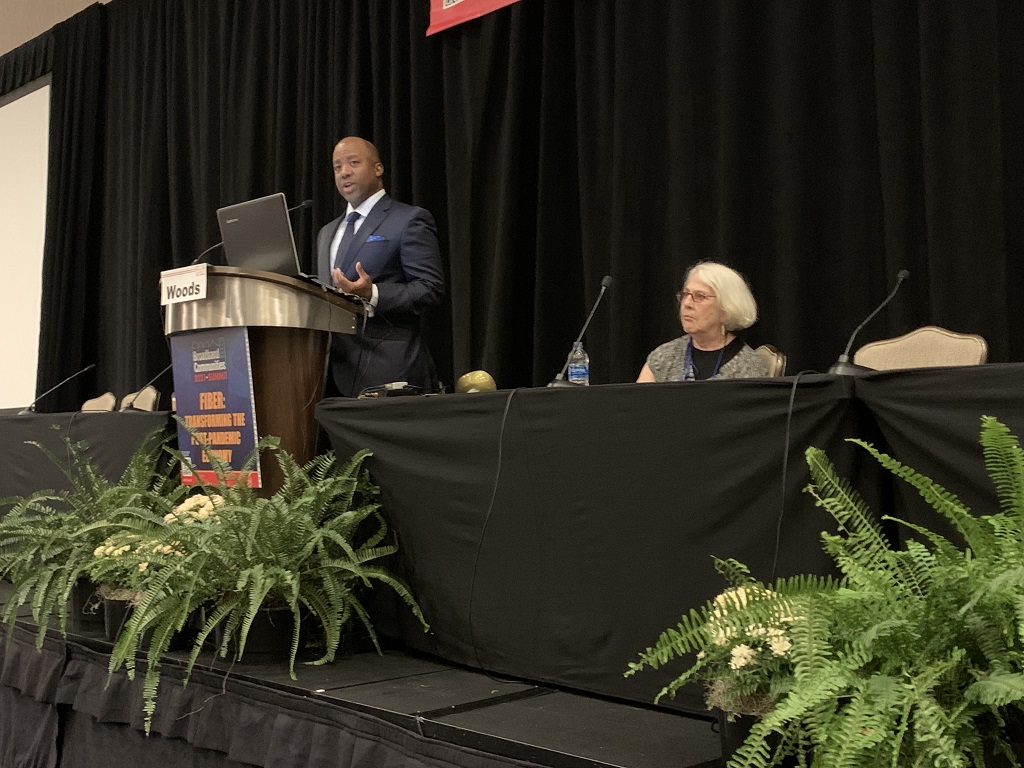 HOUSTON, September 29, 2021 – As Broadband Breakfast held the Digital Infrastructure Investment conference, the Broadband Communities Summit that hosted the event brought together leading advocates to discuss the state of connectivity in the country and what is expected for internet speeds and technology going forward.

Scott Woods – senior broadband program specialist with the federal agency National Telecommunications and Information Administration and who led the conference with his keynote, “Envisioning our Digital Destiny” – lauded the progress that has been made since the outset of the Covid-19 pandemic. But he noted that progress has not been significant for everyone in society.

“Technology got most of us through the pandemic, but not all of us,” Woods stated. “Disparities became even more stark due to Covid-19.” He stated that even though many people were able to benefit from improved connectivity, elder, low-income, and non-white Americans continue to be disproportionately impacted by inadequate broadband connectivity.

According to Woods, however, the NTIA is not content to sit on its hands. To rectify these inequities, the NTIA began three programs to address impacted communities. The NTIA’s Tribal Broadband Connectivity program, the Broadband Infrastructure program, and the Connecting Minority Communities Pilot program represent more than $5 billion in funding that is being administered by the NTIA.

Broadband infrastructure must be scalable

Following Woods’ presentation, president of the Broadband Group Jeff Reiman presented on the value of “Tech-Enabled Communities.” He described technology and connectivity as “the third rail of real estate development” and “the importance of broadband has never been more clear,” he said.

Reiman stated that a recurring challenge faced by real estate developers was keeping up with technology. He explained that often an area is planned with specific technologies in mind, but by the time the project is completed, the technology it hoped to leverage may be outdated. Rather than designing projects around specific technology, Reiman advised developers to focus on building infrastructure that will enable the bandwidth demands of tomorrows’ technologies.

Additionally, Reiman addressed the ongoing discussion between aesthetics and high connectivity. Even though clients may want high density coverage for a community, Reiman explained that they may be disappointed with the aesthetics of the high number of antennas and other street furniture that will be necessary to support community-wide Wi-Fi.

Rather than compromise the aesthetics of a community or the quality of a network, Reiman suggested developers opt for high quality, targeted Wi-Fi that covers high traffic areas. Not only would this solution be cheaper, Reiman said, but it would also combine the best of both options for an overall superior and more visually pleasing service.

Technology and data for critical infrastructure

In her presentation later in the morning, Trilogy Networks chief operating officer Nancy Shemwell presented a more existential threat than real estate development: world hunger. According to Shemwell’s data, by 2050 there will be an additional 2.5 billion people on the planet—2.5 billion more mouths to feed.

Shemwell did not mince words; as it stands now, our technology infrastructure designed to facilitate enhanced agricultural yields is simply insufficient. In terms of the automated tools that are currently in use, she stated that although some of them are capable of simple tasks such as logging data and navigating around obstacles, they are not all that sophisticated, “[They have] got the capability to not run over the dog,” she joked.

To truly unlock the value of these automated technologies, Shemwell argues that farmers need access to faster networks than they currently have, and technologies like satellite will not be enough on their own. She said that to have drones capable of increasingly complex tasks, they will need up to and beyond a terabyte per hour for their level of data computation.

Shemwell predicts that to meet future demands in the agricultural sector, the U.S. must invest in technologies that will enable a minimum of 1.5 Gbps symmetrical service within the next decade.

Rounding out the morning presentations, president and CEO of the Fiber Broadband Association Gary Bolton came out of his corner swinging at Elon Musk, arguing that the satellite coverage offered by Starlink may actually be worse for communities than lacking coverage entirely.

Bolton explained his position, stating that as it stands now, unserved regions stand a good chance at qualifying for grants and other financial aid—whether that aid comes from a private, state, or federal sources. However, if these formerly unserved regions receive coverage from Starlink—coverage that some have deemed to be grossly insufficient—they may miss out on better opportunities to secure more reliable coverage, such as fiber optic.

Bolton stayed on brand, asserting that only fiber has the potential to serve any technologies that may be coming down.

“We do not even know what the applications are that will be coming out [in the future],” he said. Bolton has long maintained this position, in the past pointing out how nobody anticipated how a global pandemic could force the global economy inside and online.

Bolton said two gigabits per second, symmetrical services will need to become the standard to continue to drive growth and facilitate the advent of new an ambitious services and technologies.

Despite this emphasis on speed, Bolton insisted that it is only one metric—one that is often used because it is digestible for lay consumers. He made it clear, however, that as speed continues to improve, so to must latency.

“[Speed] is only one parameter,” he said. “We need to be able to drive down latency to these [sub three millisecond] speeds.” Latency is the time it takes a device to communicate with the network.

“If it’s not fiber, it’s not broadband,” Bolton continued. “At the end of the day we really need a sustainable definition—fiber is the goals standard for everyone.”

The Broadband Communities Summit 2021 will continue, in-person and “masked-up,” from September 28 through September 30.