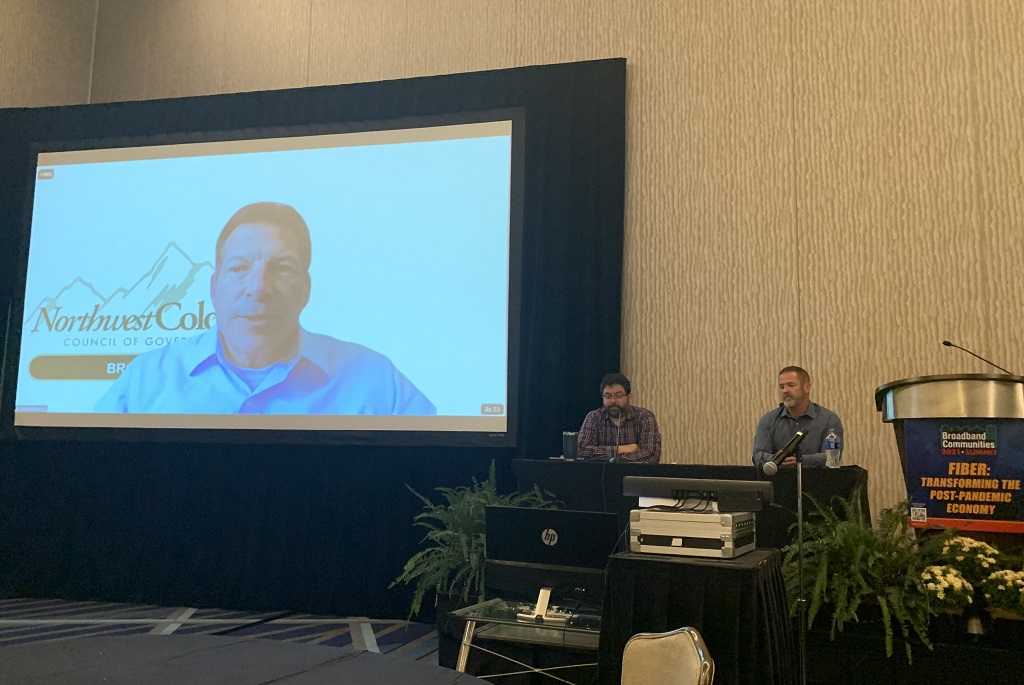 Nate Walowitz of Colorado, Chris Mitchell of Institute for Local Self Reliance, and Chris Walker of NoaNet at Digital Infrastructure Investment

HOUSTON, September 28, 2021 – Sunne Wright McPeak, president and CEO of the California Emerging Technology Fund, said Monday that stakeholders interested in expanding broadband rollout should focus on the last mile, the stretch of cable that goes to homes and businesses, by using existing middle mile infrastructure.

“I would rather leverage the resources and infrastructure they’ve [internet service providers] already built – that we as taxpayers and ratepayers have already paid for – and tap into that in order to focus on last-mile,” McPeak said at the Digital Infrastructure Investment conference.

This year’s conference heard from proponents of the open access model, which allows telecommunications providers to ride on the existing infrastructure to boost competition, lower prices, and broaden connectivity.

McPeak said she supports the open access model to deliver on what she said should be a focus: on the last mile to businesses and homes – and especially to California’s large native American population and tribal lands.

“There has to be a discipline in our lenses of getting to last mile unserved, and in California that includes all our tribal lands,” McPeak said. “We have more federally recognized tribal governments than any other state and more native Americans than any other state. And so, if we don’t focus on last mile, we will not be as efficient in our investments in middle mile. And of course, we also support open access for middle mile.

“Every dollar that we don’t have to duplicate in middle mile, although there’s going to be a middle mile network, we can get to last mile.”

For Nate Walowitz, regional broadband program director for the Northwest Colorado Council of Governments, opening access to infrastructure will entail realities that may not sound pleasant. “Coopetition,” he said. “Sometimes you’re a cooperator, sometimes you’re a competitor, and it doesn’t really matter h ow that partnership plays out because the reality is, in the business we’re in, we can’t all find a way to make money necessarily in a lot of our markets across large service areas…unless we take a strategy where we look for solid partnerships where it’s complimentary.”

Matt Schmit, director of the office of broadband in Illinois, said that the key is a “balance between last mile and middle mile expansion, and I think the kind of partnerships we’ve forged vary, from one focus to the next, but it really is that complimentary effort that’s going to get the job done in Illinois.”

McPeak said partnerships between municipalities and telecoms starts with an understanding of each’s core competencies. Telecoms, she said, are generally good at delivering telecommunications services and maintaining the network, but it also has to ensure that it is setting quality standards and deploying in hard-to-reach areas while offering affordable services for low-income households. “Those are the kinds of things that have to be done in tough negotiations,” she said.

Chris Walker, senior executive director of infrastructure strategy at the Northwest Open Access Network, said governments and telecoms each have their own things that they are great at, and exploiting those things will benefit all. That, he said, includes governments being great at handling infrastructure and the private sector being very good at innovating.