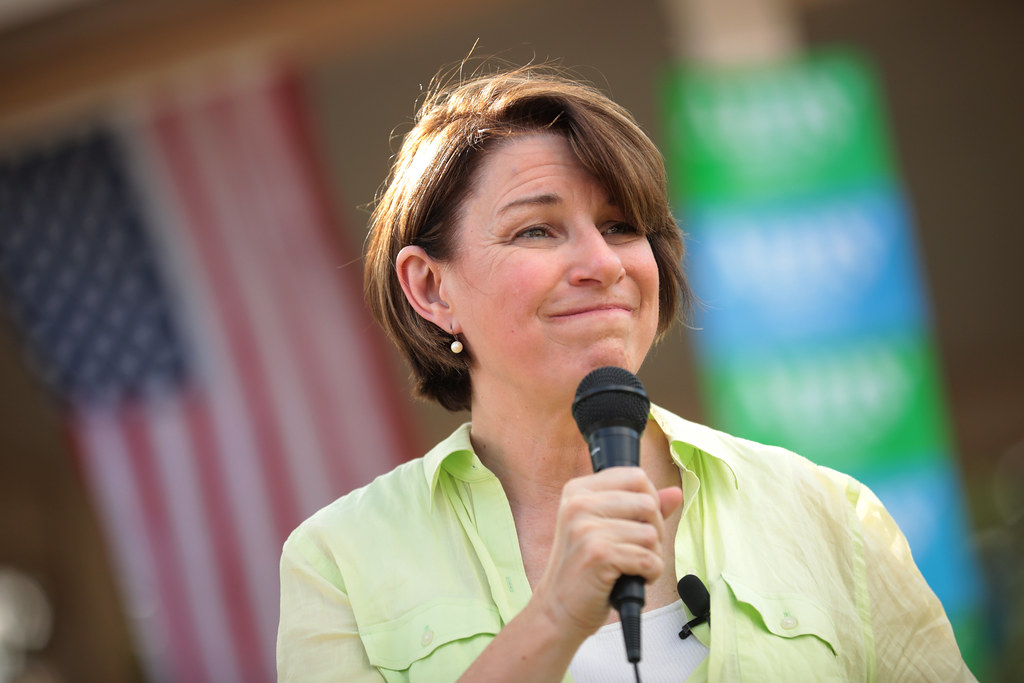 WASHINGTON, October 12, 2021 — Hosting Senator Amy Klobuchar, D-Minnesota on Tuesday, the Blandin Foundation heard from a representative for a league of municipalities that the senator should take back to Washington a call for funding in areas for connectivity that are traditionally not considered rural.

“Down here we have a lot tourism which takes people into the beautiful parts of our bluff country,” Johnson said. “It’s a difficult area to serve [broadband] . . . when we have people visiting we need them to be safe but in Whalan, they have no way to get signal.”

Klobuchar responded by illustrating the need for greater connectivity. “Snowmobilers, people who in the middle of winter, that’s very scary too when something goes wrong and their cell phone won’t work . . . that’s why we’re pushing for this emergency funding,” she said.

Klobuchar has regarded herself as a key part of the broadband provisions included in the Senate-passed infrastructure bill, which includes $65 billion for broadband. Setting an optimistic tone, Klobuchar told the audience that the infrastructure bill would pass in the House of Representatives, though a vote isn’t scheduled.

The senator commended the Blandin Foundation for “thinking about ways to provide broadband in rural areas.” Klobuchar also answered questions from statewide stakeholders about the difficulty of providing the infrastructure to rural areas of the state.

After the senator’s remarks and a brief break-out room session, speakers gave presentations on ways that rural Minnesotans can be better connected.

Region Nine argued that investment in telemedicine systems can improve access, reduce costs, and increase flexibility and convenience. The virtual Building on Broadband: Inspiring Progress conference runs until Thursday, October 14 and aims to address the unique challenges to bridging to digital divide in rural communities in Minnesota.

Observers Wrangle with Whether Bipartisanship on Broadband Infrastructure Will Last 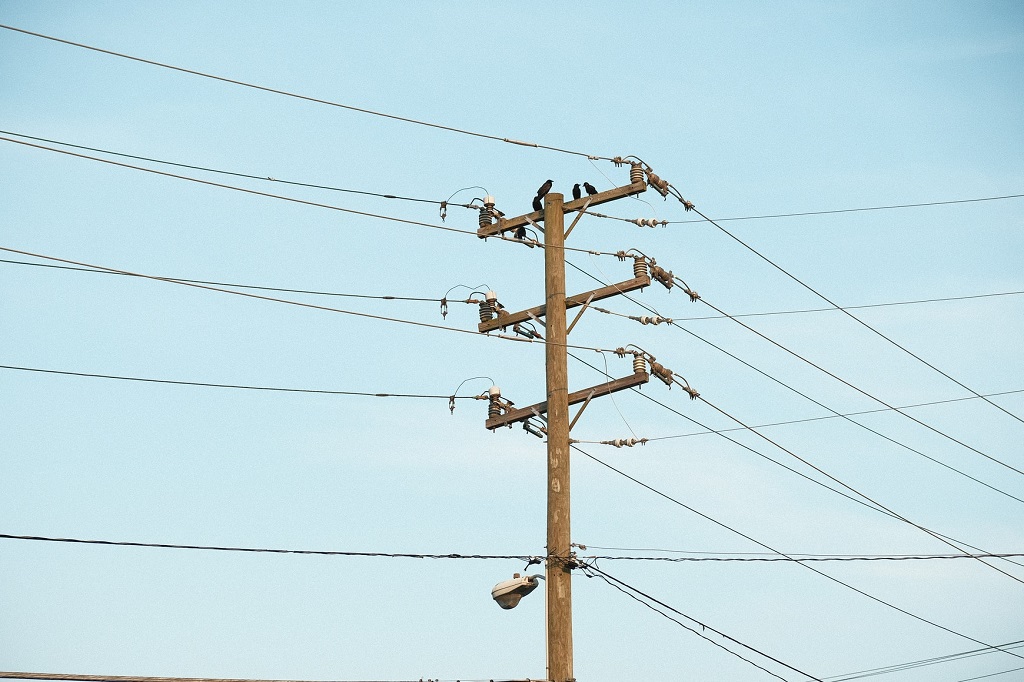 WASHINGTON, December 2, 2021 – Policymakers at the federal and state level must reform pole attachment policies to facilitate faster broadband deployment and unlock millions in economic benefits, according to a Connect the Future report released Thursday.

The report by Edward Lopez, a professor of economics at Western Carolina University, and pole attachment expert Patricia Kravtin concludes that allowing broadband providers to attach their equipment on utility poles “is the most efficient means to expand high-speed broadband access to currently unserved areas of the country.”

The report also estimates that delayed expansion due to hold ups at poles “costs Americans between $491 million and $1.86 billion” every month.

Service providers generally either bury telecommunications cables in the ground, which can be prohibitively expensive in remote areas of the country, or attach equipment over land on utility poles, which are often owned by electricity companies. While the latter is a standard practice, sometimes there are permit delays or disagreement on attaching fees that have created frictions.

Pole attachments will play a significant role for broadband expansion, as federal dollars pour in from sources including the Infrastructure Investment and Jobs Act, signed into law last month, and as 5G networks require more attachments.

The report determined the economic value of such a policy on a willingness-to-pay metric. That measure calculates how much more households are willing to pay per month for improvements in broadband and multiplies it by the number of locations becoming connected. For example, if 5.22 million locations become connected as a result of the Federal Communications Commission’s $9-billion Rural Digital Opportunity Fund, that would generate a monthly WTP of $579 million. The figure is then annualized in terms of net present value over 25 years at a 5 percent discount rate. The study includes case studies in North Carolina, Florida, Kentucky, Missouri, Texas, and Wisconsin.

The “new report makes clear that as our country continues to invest public and private dollars into expanding broadband access, policymakers must take immediate action to ensure that these investments are maximized for impact to bring connectivity to rural communities without delay – and this includes reforming outdated and ineffective pole attachment rules,” Zach Cikanek, executive director of Connect the Future, said in a press release.

“Policymakers can do this by guaranteeing a faster, fairer process for utility pole access, replacements, and dispute resolution to speed the construction of broadband infrastructure so we can more quickly achieve 100% connectivity across our country,” he added.

According to Thursday’s report, utility pole owners have exercised “significant market power over pole attachment rates, terms and conditions” and “frequently impose onerous timetables, unfeasible permitting fees, and various pre- and post-construction requirements, including full pole replacements ahead of scheduled replacement, as part of ‘make-ready’ procedures required prior to the actual attachment to the pole.”

There have been a number of lawsuits popping up in courts across the country that have involved large telecoms trying to gain cost efficient and timely access to those poles.  Last year, the Federal Communications Commission found Verizon paid “unjust” pole attachment fees to a utility company in Maryland, as it billed the maximum rate possible.

And earlier this year, the FCC alleviated some burdens by ruling that investor-owned utilities cannot charge new attachers for pole replacements if they are not the sole cause for the replacement. This stems from telecom companies having to front the cost for replacing a pole if an assessment shows that adding new equipment would warrant the change. 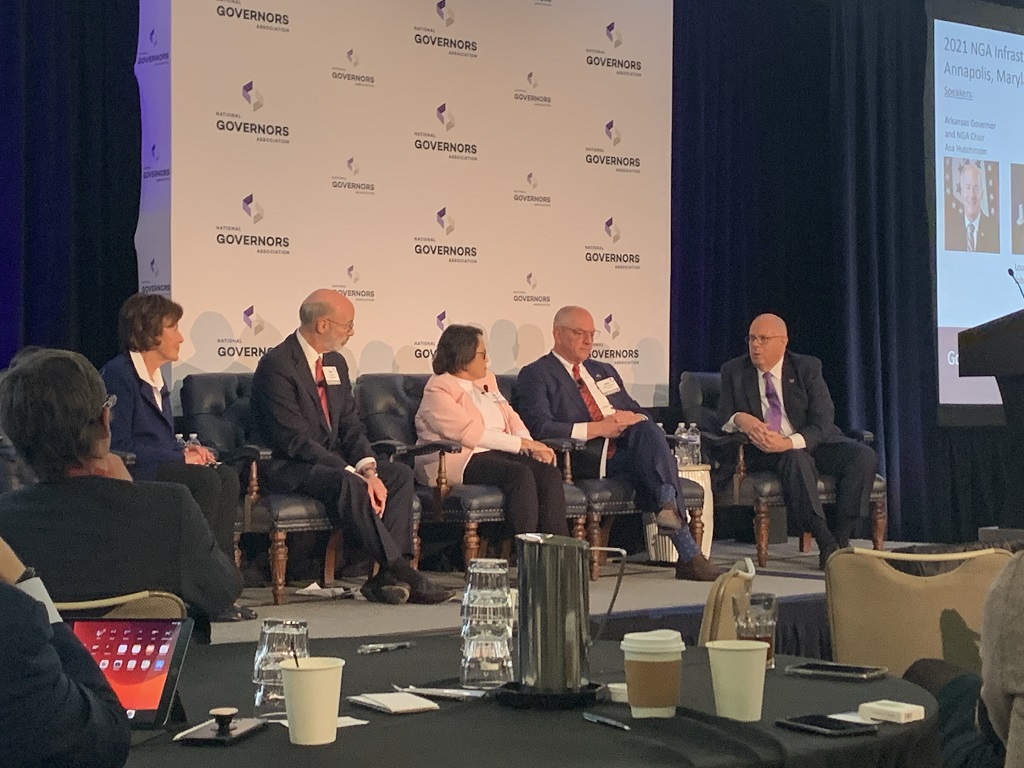 ANNAPOLIS, December 2, 2021 – Governors from some states gathered in Annapolis, Maryland, to discuss how they would use the billions in funding coming from the Infrastructure Investment and Jobs Act.

Edwards said that once Louisiana had received money from the infrastructure bill – signed into law in mid-November that would provide a minimum of $100 million to the states – the changes to broadband would be drastic. “We will be able to address [access and the digital divide] to a degree that was not be possible before.

“If there is a home or business [in Louisiana] without high-speed internet by 2029, it is because they do not want it,” Edwards said. He explained that because Louisiana identified the shortcomings in its broadband infrastructure and began laying the groundwork to improve it years ago, the state is more well equipped to take advantage of the funding that will come with the IIJA.

In early 2020, Edwards announced his “Broadband for Everyone in Louisiana” plan that outlined coverage priority areas, the guiding principles, and goals for the state’s approach to improved broadband connectivity. The state broadband office, Connect L.A., was formed to help put the plan into action.

Wolf pointed to actions Pennsylvania is taking to ensure that funds are not squandered. “[The IIJA] is not an infinite amount of money and it is not nearly what our engineers say we need,” he said. To get the most out of the funding they receive, Wolf recommended that states create centralized infrastructure banks to only allocate money to approved projects and avoid both literal and figurative “bridges to nowhere.”

“Private investment is also critically important,” Hogan said. Indeed, all the governors sharing the stage encouraged states to explore public-private efforts. Edwards said he was hopeful that the IIJA would not tie states’ hands, preventing states from utilizing such models. “We need an approach that has the flexibility to work for us,” he said. “I hope the rules are not written in a way that requires us to do all of this ourselves [without private investment].”

The purpose of this gathering is to allow governors, their secretaries, and staff to meet, collaborate, and share their experiences to help states partner for regional infrastructure projects, prioritize projects, and learn to obtain the necessary resources from the federal government to complete said projects.

Hogan presented the opening keynote and participated in some of the first day’s events. Bipartisanship was one of the focal points of the summit, and Hogan hammered on it during his keynote.

“A lot of conventional wisdom was that a federal infrastructure bill could not be in a bipartisan way,” he said. Hogan said that the collaborative work governors did on a state and regional level proved this “wisdom” to be false, stating, “the nation’s governors will continue to lead the way.”

Waiting on the federal government

Hogan said that while the money in the IIJA will be “transformational,” there are still a considerable number of unknowns. “We are still waiting for guidance from the federal government,” he said. As it stands now, he said there is no precise timeline for when the funds will be dispensed or if certain monies will have rigid, unknown requirements that could hold up the process. “The devil is in the details,” said Hogan.

Hogan said Maryland’s efforts would be concentrated on repairing and modernizing infrastructure, while also devising new ways to streamline the deployment of future projects.

The NGA summit runs through December 2 and covers topics such as broadband, freight transportation, green infrastructure and supply chain issues.