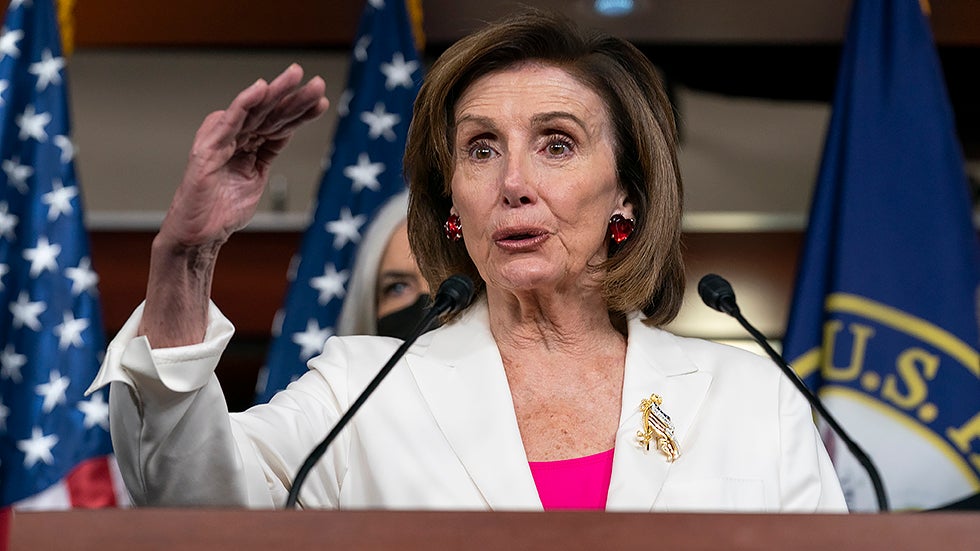 Screenshot of House Speaker Nancy Pelosi on Friday from The Hill

The bill faced unanimous Republican opposition, and saw Rep. Jared Golden, D-Maine, become the only member of his party to vote against its passage due to his concern over the bill’s increase of the federal deduction for state and local taxes paid.

The package’s passage – which has been dubbed the Build Back Better bill – comes after months of battle between Democrats over specifics of the bill’s provisions.

The bill still must pass the Senate by a simple majority, not subject to filibuster, as a budget reconciliation measure. Efforts to reach an agreement on bill content between House and Senate Democrats before either chamber voted were abandoned amid the party’s protracted infighting.

Changes to the bill in the Senate are expected given the high-profile and much-in-the-public-eye criticism from Sens. Kyrsten Sinema, D-Ariz., or Joe Manchin, D-W.Va. Because the chamber is evenly divided between Republicans and senators caucusing with the Democrats, all Democratic votes are necessary – together with the tie-breaking vote by Vice President Kamala Harris, to pass the measure.

A bipartisan group of 11 state attorneys general has opened an investigation into Meta over body image issues Instagram is believed to cause in teenagers.

The investigation is based off revelations in the Facebook Papers which show survey data suggesting around a third of teenage girls who already feel bad about their bodies feel even worse after using Instagram.

AGs’ investigation is being conducted from the angle of whether Meta has “violated state consumer protection laws and put the public at risk.”

The Facebook Papers, which detail struggles at the company to deal with misinformation, addiction and user manipulation, were first reported on by The Wall Street Journal in October with the help of whistle-blower Frances Haugen.

The Federal Trade Commission has filed a lawsuit against Facebook, while members of Congress have proposed and introduced legislation that combatting the power of the big tech companies, including Google, Amazon and Apple.

Meta has contested reporting on its alleged issues, saying the Facebook Papers were poorly interpreted in public reporting and that the company proactively combats content issues on its platform.