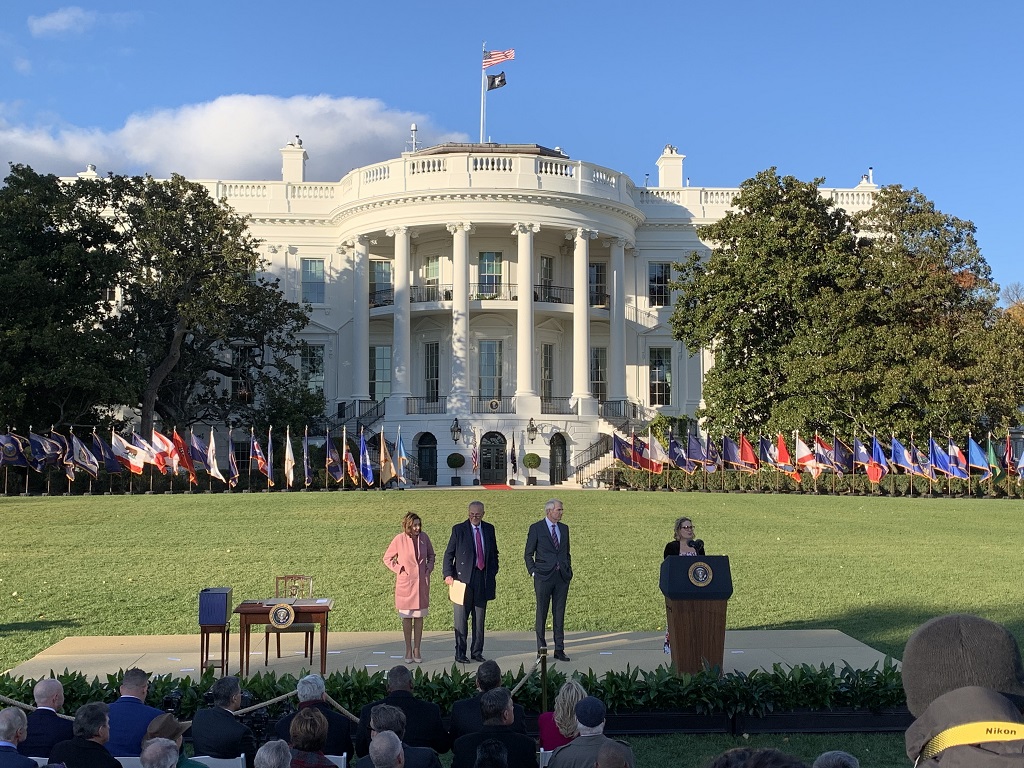 Joe Biden signed the infrastructure bill on the South Lawn of the White House on Monday. Photo by Benjamin Kahn.

November 16, 2021 – Players from across the telecom sector applauded the signing by President Joe Biden’s signing of the Infrastructure Investment and Jobs Act of 2021 that would see $65 billion invested in broadband infrastructure.

“WISPA hails President Joe Biden for his signing of the bi-partisan [IIJA],” Wireless Internet Service Providers Association President and CEO Mike Wendy said in a statement. Furthermore, he lauded the bill’s emphasis on tech diversity, which he argued would be critical to bridge the digital divide.

NCTA’s President and CEO Michael Powell also commended the president. “With the President’s signing of the [IIJA], the U.S. has taken an historic step to speed the deployment of next-generation broadband networks to unserved households and to build a durable support mechanism that will help low-income consumers connect to the internet.” He added that cable broadband providers are ready to contribute to the public-private partnerships that will be necessary to deploy and improve broadband projects for all Americans.

Utilities Technology Council President and CEO Sheryl Osiene-Riggs praised the bill in a statement. “Today, all Americans can look confident into a future with fast, reliable, and affordable broadband connections fueled by investments in broadband access for all Americans, including those in rural areas, low-income families and tribal communities. UTC members have long advocated for one-time investments in future-proof technologies that cost-effectively deliver reliable and affordable broadband services.”

John Windhausen Jr., executive director of the Schools, Health & Libraries Broadband Coalition, called the bill “a win for everyone interested in closing the digital divide,” and specifically pointed toward the bill’s acknowledgment of community anchor institutions as a feature that will “promote broadband adoption.”

In addition to private entities, some public servants also voiced their support for the bill. Federal Communications Commissioner Geoffrey Starks released a statement in favor of the bill, saying, “We now have a once-in-a-generation chance to bring broadband to all Americans.”

Evelyn Remaley, acting assistant secretary of commerce for communications and information with the National Telecommunications and Information Administration, congratulated the president and re-committed the NTIA to its role in “administering the $42.5 billion Broadband Equity, Access, and Deployment Program, which will fund the infrastructure buildouts needed to connect every American to reliable, high-speed, affordable broadband.”

Sinclair owns 144 local news stations across the country. Now, these stations will be carried by DISH.

Sinclair’s Head of Distribution and Network Relations William Bell stated that this agreement “reflects the continued importance that distributors place on local and national broadcast content.”

He added, “We look forward to continuing to provide DISH viewers with the high-quality and highly-desired entertainment, and timely local news that they depend on every day.”

In 2018, the group’s practice of purchasing small, local stations came under scrutiny in the wake of a uniform script that was circulated and played through their members stations.

Athonet announces “Bring Your Own RAN”

Communications platform Athonet announced that it would begin offering a service known as “Bring Your Own RAN” on Nov. 15.

The program will enable users to use a cloud-based dashboard to tailor radio access network specifications to best suit their needs.

“The Athonet cloud-based private network management system not only allows the organization to choose their own radio but enables them to run different radios concurrently in their private network,” Athonet writes about the program.

“For example, a different radio may be used indoor compared to outdoor to hit the required coverage and performance targets. IT managers can also view all the radios in a single dashboard without logging in/out of different management platforms.”

Though this could potentially add another dimension to customer networks that allows users to better configure their services, this announcement comes at a time of skepticism and uncertainty around the open RAN concept.